After a bumpy ride the last few years, NASCAR appears to be bouncing back – Valley News 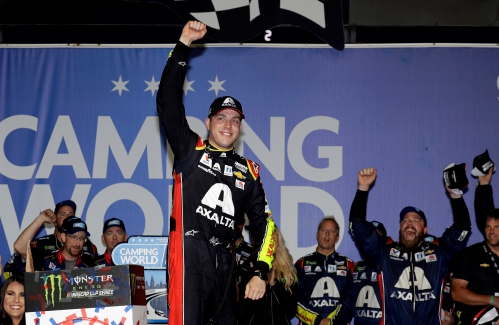 The Coke Zero Sugar 400 marks the midpoint of the 36-race 2019 NASCAR season. A new rules package has produced plenty of dramatic racing and an uptick in TV ratings. The sport expected Saturday night at Daytona International Speedway to be no different.

Heading into the final 400-mile race at Daytona on Fourth of July weekend before next season‚Äôs schedule shake-up, here are four takeaways from the NASCAR season‚Äôs first half.

‚Ė† More eyes on NASCAR: Lagging TV ratings have been one of the key indicators of the sport‚Äôs recent decline in popularity. Even a modest uptick, then, is cause for celebration.

With Fox televising the season‚Äôs opening 17 races, ratings were up 3% from 2018, with an average of 4.07 million viewers. This is an increase from 3.98 million viewers for the same races in 2018, but still down 17% from the sport‚Äôs rating in 2017 ‚ÄĒ Dale Earnhardt Jr.‚Äôs final season. Earnhardt now will look to lift NASCAR‚Äôs TV ratings during the season‚Äôs second half from the TV booth.

NBC Sports has taken over the coverage from Fox, with Earnhardt taking center stage as a color analyst. Earnhardt‚Äôs 2018 debut was a success by any measure due to his quick wit, authentic personality and incredible popularity. Junior kicking off his second season in the booth on a holiday weekend at Daytona International Speedway could be the recipe for another ratings boost.

Either way, reversing the ratings plunge has ignited optimism.

‚Ė† New rules rule: Drivers understandably were taking a wait-and-see attitude this season with the Cup Series‚Äô new rules package. The results now speak for themselves. The first 16 races of the season produced the highest amount of green flag passes for the lead (568) during the past five seasons while the average number of lead changes per race (18.69) is the most in four years.

Last Sunday‚Äôs race in Chicago set a track record with 34 lead changes on the 1.5-mile oval.

‚ÄúI think it‚Äôs been really good, especially the mile-and-a-halfs,‚ÄĚ driver Austin Dillon said. ‚ÄúThe mile-and-a-half is what this package was supposed to help. This past weekend was a crazy one. It was pretty wild.‚ÄĚ

The package was designed to create more side-by-side action and opportunity for passing while lessening single-file racing that leads to limited action. Horsepower was decreased from 750 to 550 at tracks larger than 1.2 miles. A bigger rear spoiler and more pronounced front splitter increased downforce and drag.

Most race teams have adjusted to the changes, said Dillon, who won the pole last week.

‚ÄúWe‚Äôve come a long way from the beginning of the year,‚ÄĚ he said.

‚Ė† Showman takes center stage: Alex Bowman‚Äôs breakthrough win this past Sunday in Chicago validated the high expectations for the 26-year-old and secured his place among the sport‚Äôs rising stars.

A year after he posted 11 top-10s, Bowman had been inching closer to victory lane during his second full season behind the wheel of the No. 88 car made famous by Earnhardt Jr. Bowman‚Äôs three straight runner-up finishes earlier this season showed his ability to contend on super-speedways (Talladega), 1.5-mile layouts (Kansas) and shorter tracks (Dover).

Back-to-back wins would not be out of the question for Bowman, who has proven to be comfortable at Daytona International Speedway. He was the pole-sitter at the 500-mile race in 2018 and was outside in the front row in July and again in February.

Whatever happens this week for Bowman, the Chicago win effectively locked up his spot in the Cup playoffs and proved he belonged in the conversation with fellow rising stars Kyle Larson, defending Coke Zero Sugar 400 winner Erik Jones and Hendricks Motorsports teammates William Byron and Chase Elliott.

Two-time Daytona 500 winner Denny Hamlin also has two wins while Bowman and Elliott each has one. Busch, Truex and Hamlin are teammates with Joe Gibbs Racing and are showcasing the continued strength of Toyotas. Bowman and Elliott‚Äôs wins bode well for the future of Hendricks Motorsports and its once-struggling Chevrolets.

Meanwhile, a year after piling up a dozen wins, Stewart-Haas racing has been shut out in 2019.

Kevin Harvick, the 2014 season champion, is winless following an eight-victory season. Another shock is the continued struggles of seven-time Cup champion Jimmie Johnson. The 43-year-old has not won since 2017 at Dover ‚ÄĒ a career-long drought of 76 races. Johnson, though, does have two top-five finishes, including in Chicago, and earlier this season in Texas won his first pole since 2016.