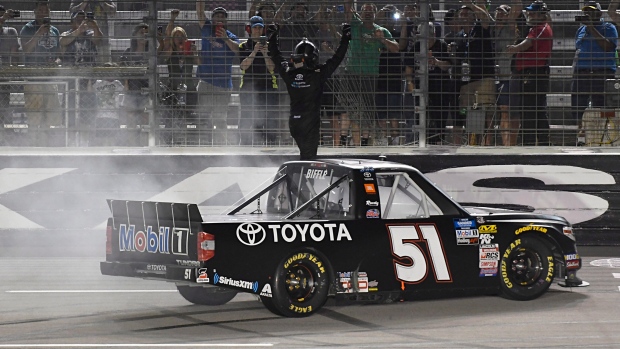 With 10 laps remaining, Biffle came out of a caution with the lead and held off the field for his first trucks series win since 2001. It was his first NASCAR start of any kind since 2016.

It was the first race of the Triple Truck Challenge, a three-race program that moves to Iowa Speedway on June 15 before wrapping up at Gateway Motorsports Park on June 22. The winner of any one, two or three of those races will receive a bonus of $50,000, $150,000 or $500,000, respectively.

Johnny Sauter, the defending champion and a five-time winner at Texas Motor Speedway, won Stage 1 but went into the wall at turn 4 after contact with Austin Hill on lap 56.

The wreck-filled race featured 13 cautions, the most in the 44-race history of the series at Texas.