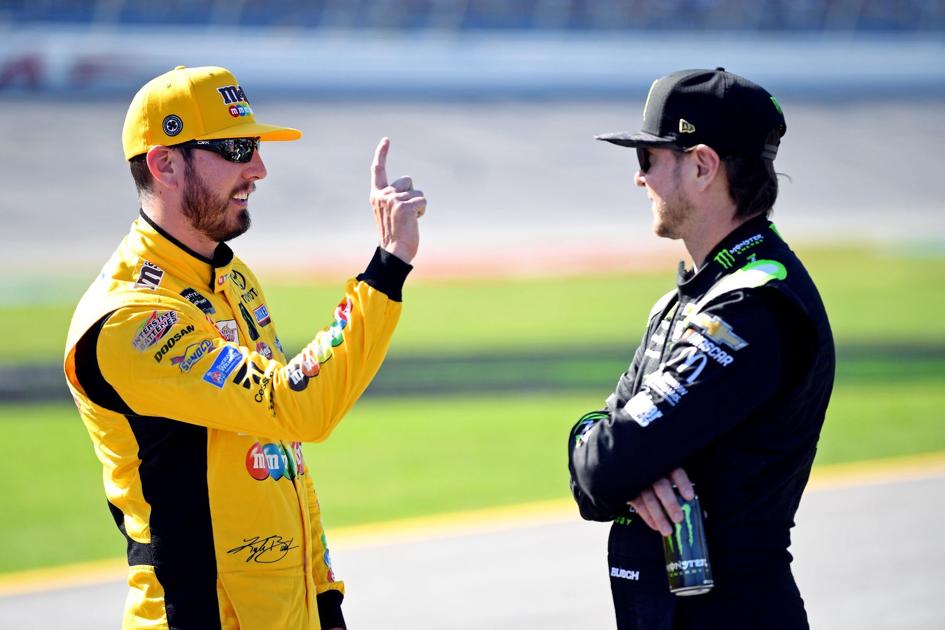 And as the Monster Energy NASCAR Cup Series prepares to head to New Hampshire Motor Speedway later this week for Sunday‚Äôs Foxwoods Resort Casino 301 (3 p.m. ET on NBCSN, PRN and SiriusXM NASCAR Radio), there is still plenty of buzz about the thrilling family duel this past week at Kentucky Speedway.

Kurt Busch‚Äôs emotional overtime victory over his younger brother Kyle in Saturday night‚Äôs Kentucky race was remarkable because of the championship implications ‚Äď Kurt has now secured a berth in the 2019 Playoffs and also because it was the first Cup win for Kurt‚Äôs crew chief Matt McCall and the first victory for a driver in Chip Ganassi‚Äôs famed No. 1 Chevrolet in six seasons.¬†

But equally as compelling, Saturday‚Äôs victory marked the first time Kurt, 40, prevailed in a 1-2 Busch finish. Two other times ‚Äď at the Sonoma, Calif. road course in 2015 and at the Bristol (Tenn.) short track earlier this year ‚Äď his ‚Äúlittle brother‚ÄĚ Kyle, 34, was tops in a brothers only outcome.

The combined winning margin when a Busch beats a Busch is mere 1.33-seconds.¬†

Fierce competition between brothers is nothing new to NASCAR‚Äôs highest ranks. Bobby and Donnie Allison competed fulltime against one another as did Terry and Bobby Labonte, Jeff and Ward Burton, Darrell and Michael Waltrip and Geoffrey, Brett and Todd Bodine to name a few.

And judging by Busch‚Äôs jubilant reaction Saturday night, the thrill of victory may be even sweeter when it comes to one-upping your sibling.

‚ÄúI haven‚Äôt seen him yet, but I was supposed to fly home with him and now I‚Äôm looking for a plane ride,” Kurt Busch said from Victory Lane, adding with a laugh, ‚ÄúSo that‚Äôs Kyle. He won‚Äôt even wait.”

But, he added with a grin, ‚ÄúIt‚Äôll be fine. We‚Äôre going over to his house tomorrow actually for a little get-together on a Sunday off and I‚Äôm going to plop the trophy down right on his kitchen counter.”¬†

Kyle ‚Äď who holds a 2-1 victory edge in the Busch Brothers 1-2 finish record – acknowledged the extra emotion as well.

‚ÄúI‚Äôm glad it was a thriller,” Kyle Busch said. ‚ÄúJust unfortunately we were on the wrong end of the deal for everybody at M&M‚Äôs and Toyota, Interstate Batteries, all the folks that get us to where we‚Äôre at.

‚ÄúBut congratulations to Kurt and Chip (Ganassi) and Monster (Energy) and all the guys over there. It‚Äôs obviously cool to put on great races and great finishes and been a part of a lot of them and not very many ‚Äď in fact, none with my brother like that, so that was a first.

¬†‚ÄúYou know, no hard feelings and we move on.”

The Busch brothers join the Labontes as the only two sets of brothers in NASCAR history to earn Cup titles.

But it‚Äôs actually the potent sibling duo of Bobby and Donnie Allison who have provided the bulk of brotherly close finishes.

Bobby was the runner-up in the first three career Cup victories for his younger brother Donnie Allison – at Rockingham, N.C. in 1968, at Charlotte Motor Speedway in 1969 and at Bristol, Tenn. in 1970. Donnie edged his brother Bobby again in the 1971 Winston 500 at Talladega to give the duo four 1-2 finishes in Donnie‚Äôs 10 career wins. In fact, Bobby finished top-10 in nine of Donnie‚Äôs victories.

The Labontes did not necessarily have the same penchant for close finishes, however they did provide a memorable double dose of sibling excellence. In 1996, younger brother Bobby won the Atlanta season finale with his brother Terry securing his second Cup championship.

That kind of ‚Äúrelative excellence‚ÄĚ has historic relevancy. There is plenty of current evidence in the Cup Series‚Äô that the ‚Äúother‚ÄĚ Busch brother tends to fair well when his sibling wins a race. In the 19 Kurt Busch victories that Kyle has competed in, he has three top-fives and six top-10 finishes, meaning he finishes top-10 a solid 31 percent of the time when his older brother wins.

Kurt, meanwhile, has 23 top-10s in the 53 races he‚Äôs competed in that Kyle has won ‚Äď an impressive 43 percent of the time his brother wins, he scores a top-10.

The best Busch combination season is Kyle‚Äôs 2015 championship year, when Kurt finished top-10 in all five races his brother won en route to the title. That included his runner-up to Kyle at Sonoma. They both have three wins at this week‚Äôs New Hampshire stop.¬†

So, as they say, perhaps, it really is all relative.¬†

‚ÄúI was in the vulnerable spot,” Kurt Busch acknowledged of Saturday‚Äôs race. ‚ÄúBut I had almost zero intention of lifting in Turns 3 and 4 and if I bounced off the fence, I probably would have then bounced off of him (Kyle).

‚ÄúIt was magic the way it worked out and I think it was two racers putting it out on the line and went as far as we could possibly go without wrecking each other and that‚Äôs what it‚Äôs all about. When you can have a solid finish like that and two brothers going at it and to put on a show, that‚Äôs the best possible outcome.

Instead, as far the Busch brothers are concerned, it was good and even better. And the NASCAR fans won as well.

« NASCAR prop picks: Past Kentucky winners or the field? – NASCAR NASCAR Truck Series Power Rankings after 2019 Buckle Up In Your Truck 225 – Beyond the Flag »