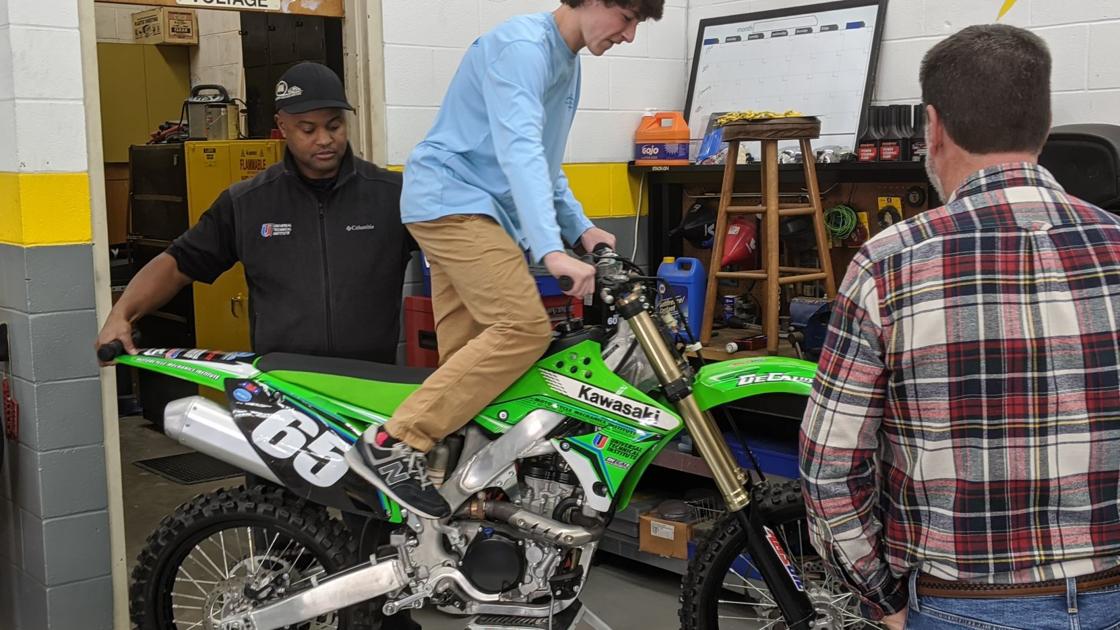 LITTLEFIELD ‚ÄĒ There‚Äôs a science to keeping a car cruising along.

That‚Äôs the lesson career and technical education students at Ayden-Grifton High School received last month, during a visit from the NASCAR Technical Institute of Mooresville.

Mario Pennycooke, a marketing manager with NASCAR Tech, said the automotive industry has changed and the image of ‚Äúgrease monkeys‚ÄĚ laboring under the hood of a vehicle is no longer accurate.

‚ÄúThere‚Äôs actually a tremendous amount of technology in today‚Äôs vehicles,‚ÄĚ Pennycooke said. ‚ÄúThere‚Äôs more computing power in the average car than what we sent to the moon 60 years ago.‚ÄĚ

To demonstrate that, Pennycooke brought a 2017 Ford Focus RS and a dirt bike from Mooresville to the high school. Pennycooke started the Ford Focus and used a computer program to shut down one of the pistons. Then he pulled up a diagnostics program and showed the students how it determined which piston was down.

‚ÄúTwenty years ago, people could say, ‚ÄėI can listen to a car and tell you what‚Äôs wrong with it.‚Äô You can‚Äôt do that anymore,‚ÄĚ Pennycooke said.

‚ÄúWhat they‚Äôre learning in school is not important just if you want to go to a fancy four-year college. STEM is important in the trades,‚ÄĚ he said. ‚ÄúYou can‚Äôt even dig a ditch these days without using technology to make sure there‚Äôs nothing under the earth before you dig.

‚ÄúThere‚Äôs a huge need in our industry for technicians,‚ÄĚ Pennycooke said. ‚ÄúThey can get into jobs that are recession-proof. Even when the recession hit a few years ago, people didn‚Äôt stop driving cars, and even if they make cars in Germany, Japan, wherever, you‚Äôre not going to send your car back overseas to work on. You‚Äôre going to have the work done right here, so you don‚Äôt have to worry about your job being outsourced.‚ÄĚ

Pennycooke taught students how to calculate the size of an engine using the dirt bike and the formula for a volume of a cylinder, which the students learned in geometry.

‚ÄúSomething you learned in middle school may not seem important, but if you build an engine that‚Äôs the wrong size, that could get your car disqualified in NASCAR,‚ÄĚ Pennycooke said. ‚ÄúIf you understand the math, it helps you understand the engine, and it makes you a more successful technician.‚ÄĚ

Automotive technology instructor Ronnie Bowen wanted to get as many students into his class to watch the presentation as possible. He reached out to several other classes, including STEM, construction and JROTC.

‚ÄúIt‚Äôs like a field trip where the field trip came to Ayden-Grifton,‚ÄĚ Bowen said. ‚ÄúI‚Äôm a firm believer in Confucius‚Äô saying, ‚ÄėI hear, and I forget. I see, and I remember. If I do it, I remember.‚Äô Today, they get to see them do it hands-on.‚ÄĚ

While he teaches the role of technology in the automotive industry, Bowen does not have the same level of equipment NASCAR Tech does, he said.

‚ÄúIt‚Äôs a big deal to get two instructors and a big rig to come all the way from Mooresville to Pitt County to give the kids a more hands-on demonstration,‚ÄĚ Bowen said.

The presentation changed the way senior James Dixon Jr. was thinking about his future, he said.

‚ÄúAfter today, I‚Äôm considering going into auto tech, but I also have the option of going into the military for welding,‚ÄĚ he said. ‚ÄúMy favorite thing is learning new stuff about cars. Every day, there is something new to learn.‚ÄĚ

He had the opportunity to use a camber tool to check the angle of tires on a drift car brought to the school, which he had never done before.

Construction student Clayton Shaver was glad to have learned some new things.

‚Äú(Pennycooke) talked about the Ford Focus and the compression and how you can cut the pistons off with a computer,‚ÄĚ Shaver said. ‚ÄúI‚Äôm not used to that. We have a bunch of old cars at our house. I‚Äôm used to dealing with carburetors and stuff.

‚ÄúI thought it was pretty unique,‚ÄĚ he said. ‚ÄúWe got some good stuff today that we don‚Äôt normally get at Ayden-Grifton.‚ÄĚ