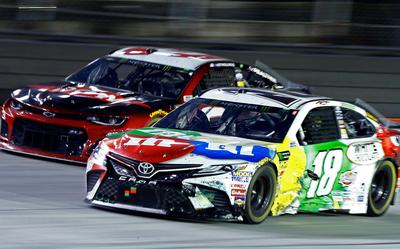 One of the unique challenges with daily fantasy NASCAR is that every track is different. Not only does this mean that certain drivers will perform better at one place than another, but each track will have different scoring tendencies than the previous one. That means we need to alter our strategies pretty drastically.

Each week here on numberFire, we’re going to dig into the track that’s hosting the upcoming weekend’s race to see what all we need to know when we’re setting our lineups. We’ll have a separate piece that looks at drivers who have excelled there in the past; here, we just want to know about the track itself. Once qualifying has been completed, we’ll also have a primer detailing which drivers fit this strategy and should be in your lineup for that week.

This week, the Monster Energy NASCAR Cup Series is heading to the high banks of Bristol for the Bass Pro Shops Night Race. What do we need to know about the track before filling out our NASCAR DFS lineups? Let’s check it out.

Since the Coca-Cola 600 on Memorial Day weekend, the longest race on the Monster Energy NASCAR Cup Series schedule has been 301 laps. On average, there have been 189.5 laps per race, which equates to less than 19 points available for laps led on FanDuel.

We’ve got to adjust our mindsets now. Because on Saturday night, they’re running 500 laps, and it changes everything for daily fantasy.

Over the past five Bristol races (since stage racing was implemented), 12 drivers have led at least 100 laps in a race, at least two in each race in that time. That means at least two drivers are going to get a double-digit bump on FanDuel from laps led alone, and if you don’t get those jolts on your rosters, you’ll be playing from behind.

A lot of times, these lap-leaders will come from the front, but that’s not universally true. Of the 12 drivers to lead 100 laps, six started on the first two rows, but two also started outside the top 15. It doesn’t hurt to start up front, but it’s also not a prerequisite for success.

That means passing is possible at this track, which is another key thing to note for DFS. That was true this year with the new aero package, too, as the top two finishers — Kyle and Kurt Busch — started 17th and 27th, respectively. That was partly due to questionable pit strategy by other cars, but the broader point that you can make passes stands.

Part of the reason that you can make these moves is that Bristol is a half-mile, high-banked, concrete blender of a track that is akin to racing Fruit Loops in your toilet bowl. After you pull that lever, all heck is going to break loose, and not every piece is hitting the pipes intact.

Wrecks push drivers lower in the order forward, artificially inflating both their finishing and place-differential points. It also creates additional restarts, giving drivers chances to differentiate their strategy and pick up positions in bunches.

Because of this, it can make sense to look for lap-leaders in “waves.” Drivers who start up front are the ones who are going to lead laps early on, but later in the race, it’s a bit more wide open, where drivers who started outside the top 10 could log laps at the front.

To illustrate this, here’s a look at the starting spots of the three drivers in each of the past five Bristol races who led the most laps.

The first takeaway is that we should not cross off a driver who is starting a bit further back even as we prioritize laps led. They can still work their way to the front and generate upside, and they’ll pick up some place-differential points along the way, as well.

The second is that we should look for drivers who fit in each “wave” and pair them together. In each tournament lineup, pick a driver near the front who can lead laps early on and pair them with another a bit further back who can push for a win late.

This will feel a bit strange. Anecdotally, you would think that prioritizing laps led would force us to roster a ton of drivers at the front of the pack. That’s not entirely true outside of the driver within our first wave, and it gives us a bit extra flexibility to use the drivers we think will be fastest once the green flag drops.

The one thing that could change with this strategy is that it may force us to pay up quite a bit. Usually, lower-salaried drivers aren’t the ones most likely to lead laps, meaning we’d have to go with top-heavy rosters in order to gobble up all the necessary upside. What does this mean for roster construction? Let’s look back at the past couple Bristol races to find out.

The above paragraph made a bit of an assumption. It was not an entirely correct one. Although it doesn’t hurt to have a high salary, being expensive is not a requirement for running out front at Bristol.

FanDuel has offered contests for the past two Bristol races. In last year’s night race, four drivers led at least 95 laps; none of them had a salary higher than $11,000. That’s partly because the salary distribution was a bit different, but everyone who led a bundle of laps was fifth in salary or lower.

The driver who led the most laps this spring — Ryan Blaney — was $11,400, the 10th-highest salary on the board entering the race. Kyle Busch won, and he was the most expensive driver, but mid-range guys can rack up laps led, too.

When they do so, those salary-savers are huge assets for DFS, as evidenced by the perfect lineup from last year’s night race.

Kurt Busch won that race, but because Chase Elliott, Clint Bowyer, and Joey Logano all had a good number of laps led, they also nudged their way into the optimal roster.

This year’s spring race wasn’t quite as gluttonous on mid-tier plays, but they still made an impact.

Bristol isn’t nearly as equipment-heavy as tracks like Michigan, and the cars complete four laps in just over a minute. Because of this, a larger number of teams can compete for a win, and once a car gets out front, it can rack up laps led in a hurry.

With that in mind, we should be actively searching for mid-tier plays who have good current form and who are fast in practice and could lead laps. Blaney ranked third and sixth in 10-lap averages during the second and third practices, respectively, in the spring and was starting third. That made it clear he was someone who was capable of running out front once the green flag dropped, and he cashed that in with a good run. Hunting for guys who fit those molds will be a key for the race.

It’s possible none of the mid-range guys will look good on paper, which may force us to fork over a bit extra salary in order to properly account for the number of laps in the race. That shouldn’t be a major concern, though.

Unlike Michigan last week, punting is abundantly viable in Bristol, as you can see from those perfect lineups above with one punting option in the night race perfect lineup and two this spring. Three drivers with salaries below $7,000 got top-20 finishes in the spring race, and that number would have been higher had Chris Buescher not had tire issues late. Low-salaried drivers are very much in play, whether it’s to get an extra stud in there or an extra mid-tier driver capable of leading laps.

When you’re trying to identify which of those value plays makes the most sense for DFS, it’s best to search for them starting a bit deeper in the order.

For value plays, you’re not counting on them to lead laps. You just want them to get a good finish and pick up some place-differential points.

To account for this, let’s look at just the drivers who have led 10 or fewer laps within the past five Bristol races. We want to see which drivers scored well without getting a bump from leading laps and where they started the race.

Not shockingly, most of them came from the middle of the pack or lower. The top four FanDuel scores among these non-lap-leaders all came from drivers who started outside the top 20, and 11 of the top 12 scores came from those starting 14th or lower. This did include several drivers who would have been punting options as Trevor Bayne finished 7th after starting 20th in the 2017 night race.

We talked before about how crashes are a bit more common here, and those will push drivers running further back up in the order. That’s one reason we can feel okay about punting.

The other is that qualifying will be a bit more random than it would be at a faster track. Because qualifying laps are so short, one slip up can send an otherwise-fast driver down in the starting order. That could allow us to get respectable value plays without risking it by using those starting near the front of the pack.

Combine the past two thoughts together, and you’ll see that we can target both high- and low-salaried drivers starting further back in the field. Again, it will feel counterproductive to do this while gunning for laps led, but the data says we absolutely can do so. As long as the car and driver are fast enough to be near the front by the end of the race, they’re a worthwhile target.

You’ll want to go this wave route for most lineups, targeting one driver starting near the front who can lead laps early and another further back who can lead laps late and contend for a win. If you can squeeze in a third driver with the ability to lead laps, that’s great.

If you need help fitting those drivers in, then you can feel free to look into punting. The lower-salaried options are more capable of finishing well at Bristol than they are most other tracks, meaning you won’t be putting a lid on your team’s upside by using them.

Finally, if a driver who puts up good 10- and 15-lap averages in practice is starting further back, you can still feel safe using them. It’s a long enough race where they’ll be able to work their way forward before the end, and a good finish with some laps led is not outside their range of outcomes. As long as you pair them with someone who can lead laps early, you can feel secure targeting a driver pretty much wherever they may start.