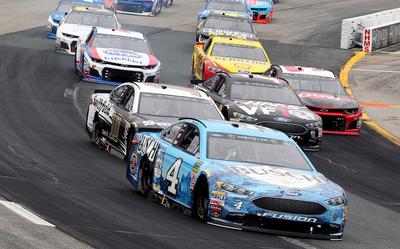 One of the unique challenges with daily fantasy NASCAR is that every track is different. Not only does this mean that certain drivers will perform better at one place than another, but each track will have different scoring tendencies than the previous one. That means we need to alter our strategies pretty drastically.

Each week here on numberFire, we’re going to dig into the track that’s hosting the upcoming weekend’s race to see what all we need to know when we’re setting our lineups. We’ll have a separate piece that looks at drivers who have excelled there in the past; here, we just want to know about the track itself. Once qualifying has been completed, we’ll also have a primer detailing which drivers fit this strategy and should be in your lineup for that week.

This week, the Monster Energy NASCAR Cup Series is heading to New Hampshire for the Foxwoods Resort Casino 301. What do we need to know about the track before filling out our NASCAR DFS lineups? Let’s check it out.

For the entire 2019 season, the buzzword across the Monster Energy NASCAR Cup Series has been “passing.” At a grand majority of the tracks, passing has been up, especially in the middle of the pack, creating plenty of action on the track and giving drivers the ability to make up spots in a hurry.

The intent of NASCAR’s reduced-horsepower, increased-downforce rules package was to do exactly that on speedways, tracks where the action had stagnated in recent years. Given how prevalent those tracks are on the schedule, it makes sense that they would emphasize making things better at those tracks.

But the opposite effect has taken hold at slower tracks. There, instead of getting a draft off the car in front of them, drivers are dealing with increased volatile air, which is upsetting their cars and making passing borderline impossible.

With the Cup Series in New Hampshire this weekend, those concerns are right back on the table.

New Hampshire is a flat, one-mile track where drafting is the furthest thing from your mind. At other tracks like that under the new rules package, passes have been at a premium.

This weekend will be the fourth time the Cup Series has raced at a track that would fit under the classification of “flat and slow.” The other three are Phoenix, Martinsville, and Richmond. Although the tracks are definitely different, they are all the tracks that would be most vulnerable to the ills of the new rules package.

The data confirms that the narrative here is more than just a daunting tale; it’s a fact. The table below shows how many green-flag passes have taken place in each of the first three races at similar tracks in 2019. Because all three tracks host playoff races, which can change the style of racing a bit, the data from 2018 is exclusively from the spring race at each track.

Things were up a hair in Martinsville. But even there, Brad Keselowski jumped out front and led 446 of 500 laps en route to victory. And that’s one of the key discussion points when passing is difficult: it puts an increased emphasis on drivers who can lead laps.

Sunday’s race in New Hampshire will be 301 laps, the longest race in that department since the Coca-Cola 600 in May. That’s 30.1 FanDuel points available for laps led, and drivers have gotten difference-making totals there in past years at this track.

In the past five New Hampshire races, seven different drivers have led at least 100 laps in a race, and three others led at least 83 laps. The driver to lead the most laps has averaged 138.4 laps out front, which amounts to 13.8 FanDuel points. Those aren’t points we can afford to miss out on.

Not shockingly, most of those laps led have come from drivers who started at the front. All 10 drivers to lead 83 or more laps started eighth or higher, and six of them started the race on the front row.

This was under the old rules package, where passing was likely higher than it’ll be on Sunday. If New Hampshire follows a similar route to what we’ve seen at similar tracks in 2019, things could get even a bit more lopsided toward those who pull off a good run in qualifying.

What does this mean for DFS? Should we be front-loading in pursuit of finding laps led, or can we still squeeze some upside out of place-differential candidates deeper in the field? Let’s dig a bit deeper into the races at similar tracks to see what we find.

One thing we know entering Sunday is that we’re going to have to put a larger emphasis on laps led than we have in recent races. That’s a given. The races at similar tracks can tell us how drastic we have to be in that pursuit.

We already mentioned Keselowski’s dominance in the Martinsville race. In Phoenix and Richmond, there were a pair of drivers who controlled the grand majority of the laps to be led.

In Phoenix, Kyle Busch and Ryan Blaney combined to lead 86.9% of the total laps. In Richmond, it was Busch and Martin Truex Jr. who were out front for 71.8% of the laps. This is in line with what you’d expect based on the difficulty of passing, and it reflects what we’ve seen in past New Hampshire races.

This should solidify that — in most lineups — we’re going to want two guys starting near the front who are capable of leading laps. We can go with a single stud at times in case one of the lap-leaders fails to finish well (which happened with Busch in Richmond), but the default roster construction should be two studs capable of leading laps.

The question then shifts to how we fill in the other three slots.

In theory, finding place-differential cars should be difficult with passing being minimal. At least at the three tracks we’re focusing on, that hasn’t been the case.

In all three of the races, at least three drivers who started the race 15th or worse wound up in the perfect DFS lineup for that week. Five of those nine drivers started outside the top 25. The low-passing nature of these tracks did not prevent drivers from picking up place-differential points.

Anecdotally, this does make sense. Even if passing is extremely difficult, these are still long races. That’s plenty of time for drivers to methodically pick their way through the field, and it also gives crew chiefs ample opportunities to artificially push their drivers forward via pit strategy. With how important track position is, it shouldn’t be a major shock that this is the case.

This means that the impact of the new aero package is felt more at the front of the pack — where the quality of driver is higher — than it is with lower-end drivers in the middle of the running order. Place-differential points are fully possible as long as the cars starting deep in the order are good enough.

That final qualifier is a big one. In last year’s race at New Hampshire, most of the top-end drivers were starting in the front half of the field, and as a result, none of the drivers in the perfect lineup started deeper than 18th.

It seems as if the most likely starting range to find respectable value plays is somewhere around the teens. In the past five races at New Hampshire, 16 drivers have scored at least 70 FanDuel points while leading less than 10 laps. Ten of those 16 started between 10th and 20th. The drivers in this range have a bit of a place-differential juice, but they’re also starting high enough in the order to have access to a top-10 finish. Realistically, this is where we should expect to find our palatable mid-range options and value plays.

In order to identify which drivers are capable of making their way forward (and which can jump out and lead laps), we can go back to leaning on data we get from practices. At the larger tracks, this has been a bit de-emphasized because drafting can influence practice times, but that won’t be an issue in New Hampshire.

Not only will that make the practice data better, but we should also have more of it. There are three practices scheduled before the race, and most drivers should have 10-lap averages for both Saturday sessions. That’s a recipe for amping up how much we value what happens in those pre-race circuits.

After that, it will be valuable to see which drivers excelled at the similar tracks we discussed before. Those races happened a relatively long time ago, and teams have improved since then, but broadly knowing which cars do well on shorter, flat tracks will give us good insight on what to expect on Sunday.

The two key races there will be Phoenix and Richmond. Because Martinsville is just a half mile, it’s a bigger deviation from the one-mile track in New Hampshire than Phoenix (one mile) and Richmond (three-quarters of a mile) are.

Once you combine practice data with what we’ve seen at those other tracks this year, we should have a good idea of which drivers can push for a top-10 finish during the race. This helps us determine whether or not there are legit cars starting in the back half of the field. If there are, we can feel good about targeting them for place-differential; if not, we’ll want to drift a bit higher in the order and accept a bit less upside in the place-differential department.

Overall, the biggest difference for New Hampshire from our recent strategies is that we have to go back to emphasizing laps led. There are more than 30 points available for those on FanDuel on Sunday, and with the new package doing what it has, there’s a good chance those points are cornered by one or two drivers. We’ll want to work hard to identify who those drivers will be on Sunday. If we do, our lineup will be off to a head start relative to the competition. If not, we’d better hope those value plays pull off some magic because we’re going to need help digging out of that massive hole.

« Speeding drivers more likely to crash after watching Formula One ‚Äď as they attempt to imitate professional racers – The Sun NASCAR prop picks: Past Kentucky winners or the field? – NASCAR »