‚ÄúGlory Road‚ÄĚ has been ‚Äúa prominent focal point‚ÄĚ of the NASCAR Hall of Fame since the facility opened in 2010, and on January 11th that exhibit will be updated by the museum‚Äôs first guest-curator, Dale Earnhardt Jr.

The exhibit will feature 18 vehicles personally selected by the former NASCAR racing star.

‚ÄúWe are excited to present some of NASCAR‚Äôs most iconic premier series championship cars from the eyes of one of our biggest fans and ambassadors, Dale Earnhardt, Jr.,‚ÄĚ Winston Kelley, executive director, is quoted in the announcement.

‚ÄúI have always been inspired by Dale Jr.‚Äôs sincere interest in, and appreciation for, the history of our great sport,‚ÄĚ Kelley added. ‚ÄúHaving Dale guest curate one of our most recognizable exhibits following his days as a full-time driver has always been one of my personal goals. With so much from which to choose, selecting a theme, and narrowing that theme to 18 cars from a list of 75-100 available cars, is a very tough task. I know I can speak for my fellow NASCAR fans in thanking Dale for once again giving back to the sport he so dearly loves.‚ÄĚ 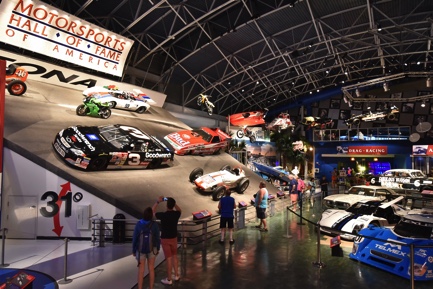 ‚ÄúHaving the chance to help choose the cars for the NASCAR Hall of Fame‚Äôs newest installment of Glory Road was an opportunity that I couldn‚Äôt pass up,‚ÄĚ Earnhardt said. ‚ÄúEveryone knows how much I enjoy learning about the history of our sport and sharing that history with people, and with this, I‚Äôm able to play a small role in what we share with fans who visit the NASCAR Hall of Fame.

‚ÄúI definitely wanted to represent a broad history of the sport as a whole, so we could also see the progression of the cars. It‚Äôs really cool when they‚Äôre all there together and you can see all that‚Äôs changed in the technology from where we started to where we are today.‚ÄĚ

This article, written by Larry Edsall, was originally published on ClassicCars.com, an editorial partner of Motor Authority.