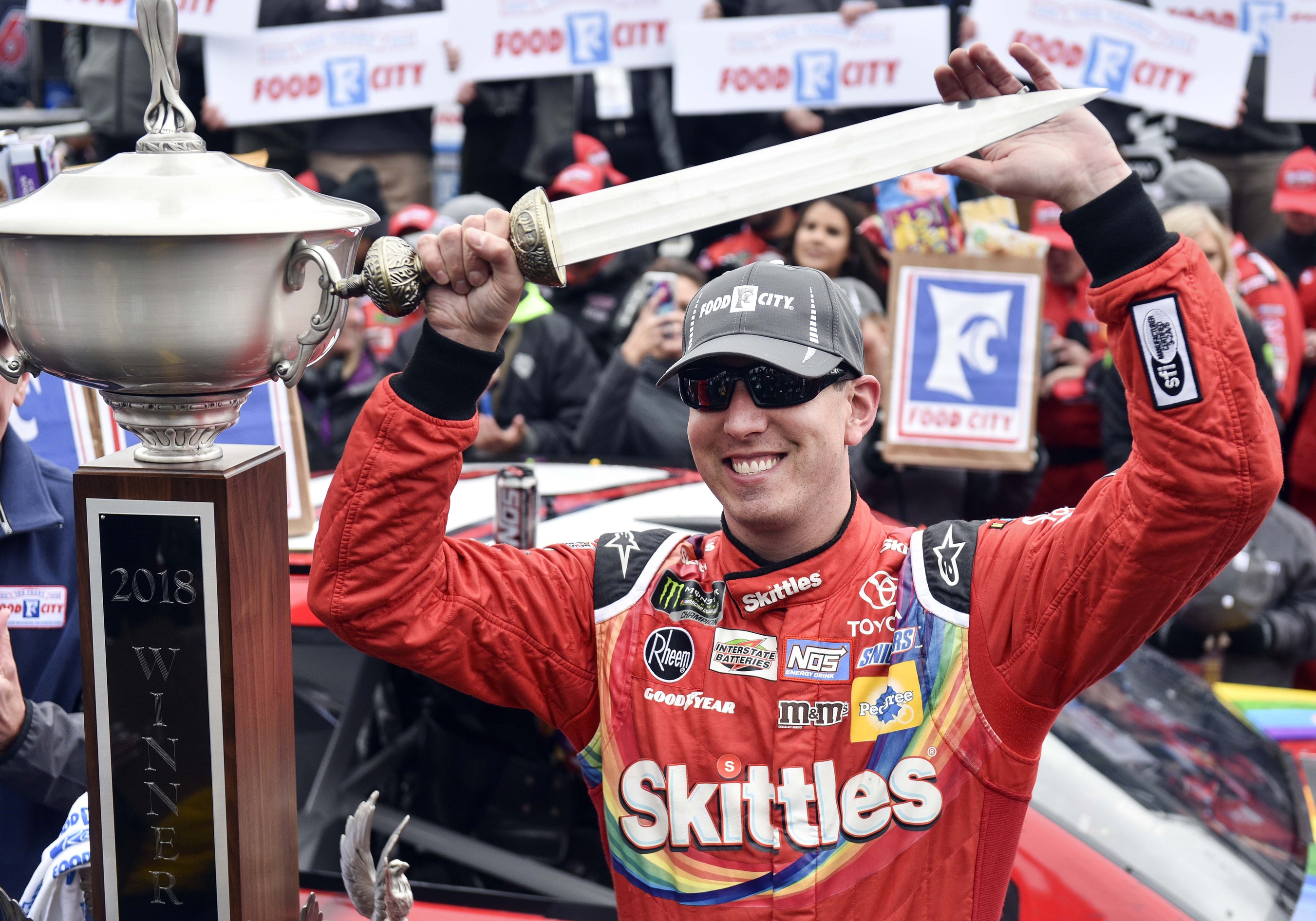 Rankings below are based on a mixture of expected output and DraftKingsā NASCAR salaries for Sundayās Food City 500 at Bristol Motor Speedway. The ordering is not based on highest projected fantasy totals, but rather by value of each driver.

1. Kyle Busch ($12,900) ā Last fall at Bristol, Buschās day was ruined after a pileup wreck on Lap 1. On Day 2 of the spring race, the weather allowed for long runs. Busch was the best driver running the bottom groove on long runs and won the race. (7.2 fppk)

3. Kyle Larson ($9,500) ā There is one man who can usurp Kyle Buschās reign as the king of Bristol, and itās Larson. There is just one catch, and thatās the 2019 rules package. So far, the high downforce package has been a thorn in Larsonās side, and it likely will continue this weekend. (4.3 fppk)

4. Chase Elliott ($8,900) ā Momentum is on Elliottās side. He scored the second most hog points (fast lap and laps led points) at Martinsville, and then the fourth most at a completely different track type in Texas. Elliott led 112 laps at Bristol last fall. (4.9 fppk)

5. Martin Truex, Jr. ($9,800) ā It appeared that the No. 19 car was the second fastest car to start the season. However, at Martinsville, Truexās speed disappeared. That could be a matter of the strong aero disadvantage birthed by the new racing package, but if thatās the case, that disadvantage will be in full effect this weekend at Bristol. (4.4 fppk)

6. Clint Bowyer ($8,600) ā He has raced well at the short tracks in the new package. At Phoenix, Bowyer was on his way to a top-five day, but a misguided pit stop mired his car in traffic late in the race. At Martinsville, he finished seventh. (4.0 fppk)

7. Kevin Harvick ($11,600) ā All season long, the stats have confirmed Harvickās speed, but he has nothing to show for it. Last week was Harvickās worst race of the season, and the stats bear that out. Harvick was 13th fastest on green flag runs and 20th on restarts. (4.2 fppk)

8. Joey Logano ($11,100) ā The past two weeks have been rough for Logano, but Bristol should be a good bounce-back race. Busch and Larson are the current kings of The Colosseum, but Logano is the next in line with an average of 24 hog points per race over the past seven races. (4.0 fppk)

9. Denny Hamlin ($9,200) ā As predicted in previous rankings articles, Hamlin was on the verge of a big fantasy NASCAR performance. His car has been strong all season, but he was never in a position to score points. That changed with his win at Texas last week. (5.0 fppk)

10. Kurt Busch ($10,700) ā Sometimes wins unfairly slip through a driverās fingers, and sometimes they get wins they donāt deserve. Last year, four drivers led six times as many laps as Kurt Busch, but Kurt led the one lap that mattered. (5.4 fppk)

11. Brad Keselowski ($12,200) ā In the fall race, Keselowski was the lucky dog twice in Stage No. 3. Thatās an accurate reflection of a driver with an average finish of 26th at Bristol over his past six races. (6.1 fppk)

13. Aric Almirola ($8,300) ā Bristol is not one of Almirolaās standout tracks; itās just another track. He has 12 top-10s in 54 races. Two weeks ago, Almirola started on the front row at Martinsville and did absolutely nothing with the premium track position. (4.5 fppk)

14. Ryan Newman ($7,000) ā Bristol is great race track to be a jerk. Drivers canāt block at the intermediate tracks with speeds around 180 mph. At Bristol, drivers safely can block. Newman has a top-15 finish in eight of the past 10 Bristol races. (4.1 fppk)

16. Daniel Suarez ($7,300) ā For the first time ever, Suarez feels like he is a part of a team. He and his SHR teammates went bowling two weeks ago. If Joe Gibbs Racing only knew it took one bowling outing to get this guy to race well. If his SHR teammates go to the movies, watch out ā championship! (4.3 fppk)

18. Jimmie Johnson ($8,000) ā As Johnsonās skills have declined, he still has remained a dominant force at the high bank, concrete, short tracks. Johnsonās past two wins were at Dover and Bristol. (3.5 fppk)

19. Austin Dillon ($7,200) ā If nothing happens, Dillon is a 15th-place driver, give or take a few spots. If he catches a minor bad break, then heās a 15th-to-20th-place driver. If misfortune visits other well funded drivers, he can sneak into the top 10. It does not need to be any more scientific than that. (3.6 fppk)

NASCAR: The major ramification of Daniel Suarezās decision – Beyond the Flag