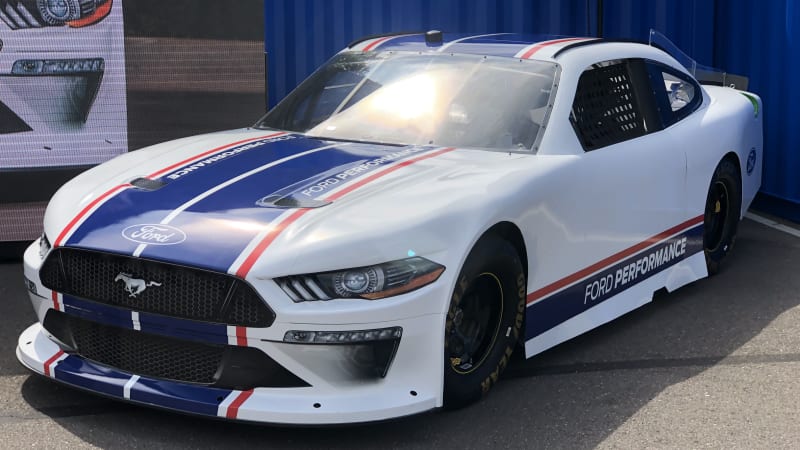 Ford today introduced the bellowing Mustang-badged race car that will compete in NASCAR’s Xfinity series during the 2020 season. The Blue Oval wrapped a new-look design around familiar, race-tested parts to create the car it hopes will continue to give rivals Chevrolet and Toyota a run for their money.

Like the racer that competes in the Monster Energy Cup, the Xfinity car is a Mustang in name and design only. It shares little more than a few styling cues with Ford’s popular pony car. It’s a purpose-built race car developed by the Ford Performance Technical Center in Concord, North Carolina. The team that worked on it also helps develop production models, including the 760-horsepower Shelby GT500, but most of the parts found under the body are proven components that have been around for decades. That’s a big part of what keeps NASCAR’s minor league series relatively affordable.

Ford hasn’t released the Mustang’s specifications yet, but the NASCAR rule book sheds light on what’s under the body. Previous Xfinity-spec used a 358-cubic-inch V8 engine that relies on carburetors (seriously) to generate up to about 700 horsepower and 520 pound-feet of torque depending on the car and its state of tune. When it comes to racing, this is about as old-fashioned as it gets. We expect a similar engine will power the car built to race during the 2020 season.

Ford’s newest Mustang-badged race car will make its competition debut on Feb. 15, 2020, at the NASCAR Racing Experience 300 taking place on the Daytona International Speedway. It has big shoes to fill; its predecessor won three driver’s championships and six owner’s titles since it started racing full-time in 2011. When the checkered flag drops in Florida, the Mustang will need to fend off competition from similarly-built examples of the Toyota Supra, which replaced the Camry in 2019, and the Chevrolet Camaro, which took the torch from the SS after production of the regular, Australian-built car ended in 2017.