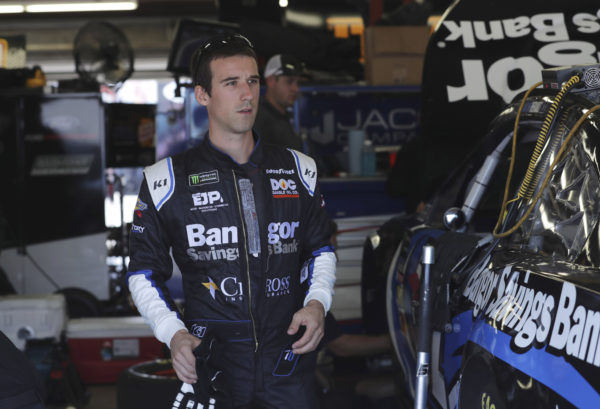 He finished five laps down but completed the race.

Denny Hamlin took the checkered flag for the win.

Theriault, driving the No. 52 Bangor Savings Bank and Trick Shot Penetrating Lubricant Ford for the underfunded Rick Ware Racing team, had the slowest qualifying time among the 38 cars over the 2.5-mile track at 56.011 seconds but he started 29th because nine cars failed the pre-race technical inspection and had to start at the back of the field.

The race was divided into two 50-lap stages and a final 60-lap stage.

Theriault was driving one of three Rick Ware Racing team‚Äôs cars in the race along with the No. 51 Ford of B.J. McLeod and the No. 53 Chevy of Josh Bilicki.

Ware Racing has used 12 different drivers this season and has finished inside the top 30 eight times in 46 starts.

Theriault had three previous top 10 finishes at Pocono in the ARCA Series: a fourth, eighth and ninth. He won the 2017 ARCA points championship for Ken Schrader Racing with a serles-leading seven wins and 16 top-five finishes.

A week ago at New Hampshire Motor Speedway in Loudon, Theriault started 36th in the 37-car Foxwoods Resort Casino 301 field and finished 35th after completing just 185 of the 301 laps due to a rear gear mechanical problem.

He became the first Maine native to drive in NASCAR‚Äôs top series since Newburgh‚Äôs Ricky Craven concluded his 278-race career in 2004.

Theriault is planning to return to his home track, Caribou‚Äôs Spud Speedway, for next Sunday afternoon‚Äôs Firecracker 200 in the Pro All Stars Series North Super Late Model tour.