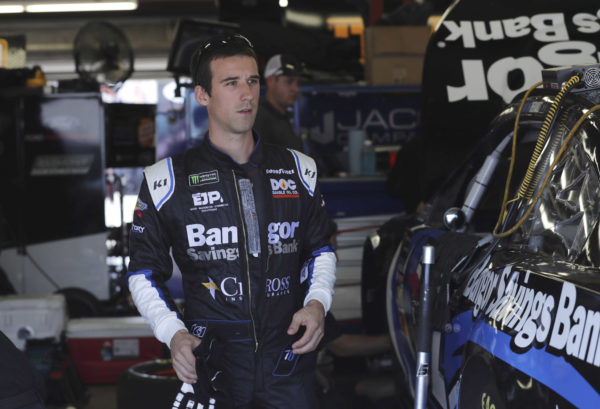 Fort Kent native Austin TheriaultŌĆÖs racing future for the rest of this season is up in the air.

He was supposed to drive in SundayŌĆÖs NASCAR Monster Energy Cup Series Hollywood Casino 400 at Kansas Speedway but wasnŌĆÖt medically cleared by NASCAR after suffering what Theriault referred to as an ŌĆ£upper body injuryŌĆØ during an Oct. 14 wreck at the 1000Bulbs.com 500 at Talladega Speedway.

Xfinity Series regular Garrett Smithley filled in for Theriault in the Rick Ware Racing No. 52 Ford and finished 34th at Kansas Speedway.

ŌĆ£As a sport, we have continued to build safer cars, but there still is inherent risk when you strap on your helmet to race,ŌĆØ Theriault said. ŌĆ£I am feeling well and believe that I will be returning to competition fairly soon.

ŌĆ£I am under the care of doctors approved by NASCAR and will return when they allow me to,ŌĆØ Theriault added.

It is the second significant injury sustained by the 25-year-old Theriault, who missed four Camping World Truck Series races in 2015 after suffering a compression fracture in his back during a race at Las Vegas Motor Speedway.

Two other prominent Maine racers have also been seriously injured in wrecks.

NewburghŌĆÖs Ricky Craven, racing in the Monster Energy Cup Series, suffered a broken back when his car went airborne at Talladega in 1996 and, a year later, he broke his shoulder blade and suffered a concussion at Texas Motor Speedway.

CherryfieldŌĆÖs Andy Santerre was racing in the Xfinity Series in 1999 when he broke his leg at Daytona International Speedway.

There are four races left in the Monster Energy Cup Series this season.

If Theriault is cleared to race, he has indicated that he intends to run the season finale, the Ford EcoBoost 400 at Homestead-Miami Speedway on Nov. 17.

Theriault said they will be displaying the colors of the Travis Mills Foundation to honor its ŌĆ£great work.ŌĆØ

Mills is a former soldier in the U.S. Army who became a quadruple amputee after he was injured by an improvised explosive device while on his third tour of duty in Afghanistan.

Mills now lives in Maine and is an inspirational speaker. He established the Travis Mills Foundation, which supports veterans and their families and helps them overcome physical obstacles and strengthen their families while also supplying them with an opportunity for rest and relaxation.

This is TheriaultŌĆÖs first season in the Monster Energy Cup Series. He has raced five times for Rick Ware Racing, an underfunded team with three cars (Nos. 51, 52 and 53) and a variety of drivers.

He wound up 35th at Talladega, 32nd at Michigan International Speedway and Richmond Raceway, 34th at Pocono Raceway and 35th at New Hampshire Motor Speedway.

Theriault was running on the lead lap in 26th place at Talladega when he got swallowed up in a wreck with 26 laps to go.