Logano confronted Hamlin in the pitlane after being knocked into a spin during last weekend’s race, and shoved the Joe Gibbs Racing driver as he walked away – which triggered a wider altercation involving team members.

JGR has had an extraordinary 2019 season, winning 16 of the 33 Cup races held so far and currently holding the top three spots in the playoff standings with Martin Truex Jr, Hamlin and Kyle Busch.

Reigning champion Logano is next up in fourth in the points, with his Penske team having won six races in 2019.

At Texas this weekend Logano said his main regret was having thought Hamlin might express any contrition.

“I probably shouldn’t have gone down there looking for an apology for something that he probably wasn’t going to apologise for,” Logano said.

“I let my emotions get the best of me, that’s a mistake on my part, and I probably didn’t handle that correctly.

“I am going to run my race and we will see who ends up ahead.”

The confrontation last weekend escalated when crew members from both teams tried to separate the drivers as Hamlin followed Logano after his initial shove.

Logano’s tyre specialist Dave Nichols Jr tackled Hamlin from behind and brought him to the ground, resulting in Nichols being suspended for this weekend’s Texas event.

Hamlin said the greater blame in the incident lay with the Penske team members and accused Logano’s crew chief Todd Gordon of failing to control his colleagues.

“I thought that my guys were pretty level, to be honest with you, through that whole deal,” said Hamlin. 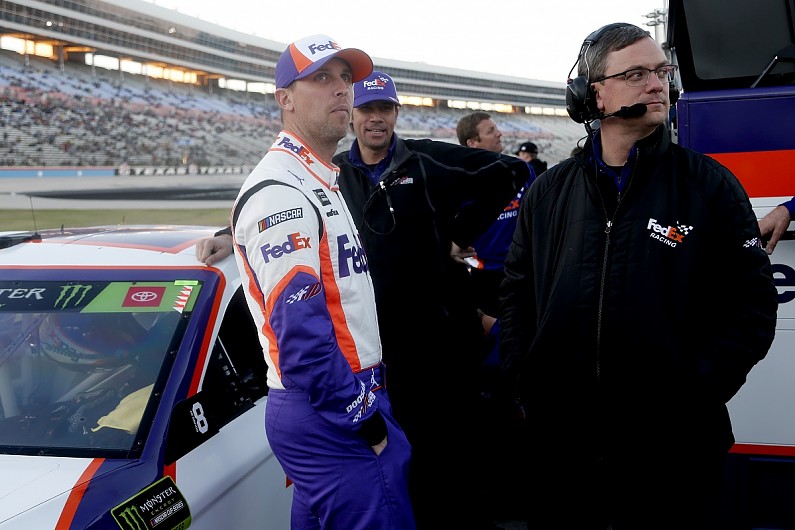 “You could see quite a few times Joey is right in front of them and no one lays a hand on Joey.

“I think it’s just a lack of control that Todd’s got with his people.”

Tensions have flared between Logano and Hamlin multiple times in recent years, including a Fontana collision in 2013 that sidelined Hamlin for four races with a back injury.

Asked if he ever got the feeling that Logano just knows that he can get to him, Hamlin replied: “No, he’s not that smart.”

Logano said he expected Hamlin “to turn it that way” and said had their roles in the on-track clash been the other way around he would have apologised.

“For me, as a man, the first thing I do is own up to my mistakes,” Logano said.

“I probably would have walked down to him if I did the same thing and said I was sorry and that I screwed up. That is what sent me off the edge.”

Told that Hamlin had taken responsibility for the on-track incident during media interviews this weekend, Logano replied: “That is fine. He didn’t own up to it when we talked about it at the time.

“Like I said, I am regretful of the way I handled it.

“I let someone affect my character and that is something I am not proud of.

“We get stronger from these moments and you live and you learn and you move on.”

Sunday’s Texas race is the second of the three rounds that settle which four drivers go to the Homestead finale in title contention.