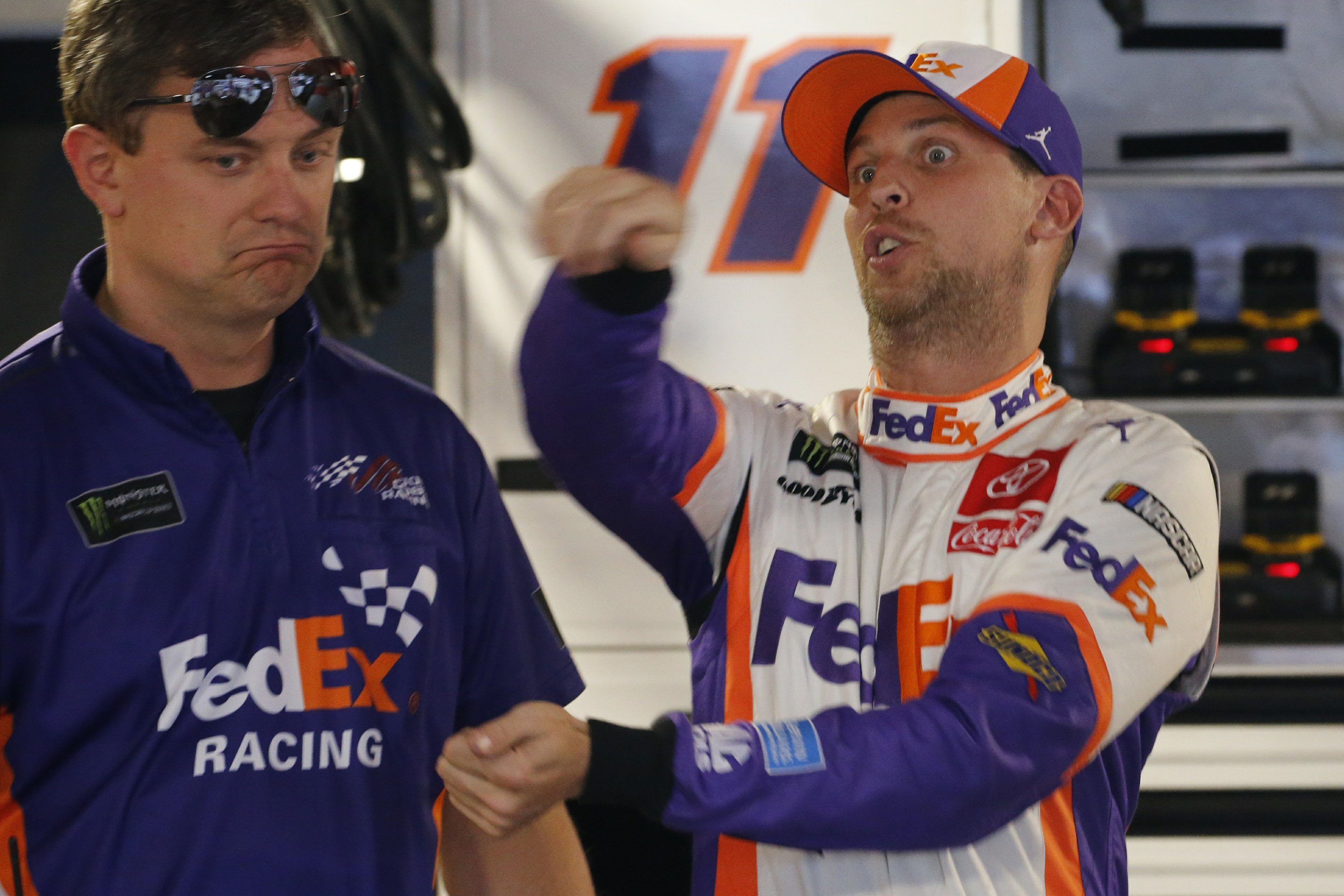 FORT WORTH, Texas (AP) ‚ÄĒ Denny Hamlin can put off until after the season the surgery he needs to repair a torn labrum in his left shoulder that has bothered him for some time.

There is still the push to try to win his first NASCAR Cup championship, and a lingering feud with Joey Logano.

A week after another confrontation between the title contenders, Hamlin and Logano got to Texas with two races left to try to stay in the top four spots for the season finale at Homestead.

Hamlin said Friday that he doesn‚Äôt know what caused the injury, but that it hasn‚Äôt affected him while driving the No. 11 Toyota for Joe Gibbs Racing. And it wasn‚Äôt aggravated when he got horse-collared and pulled to the ground by a member of Logano‚Äôs crew in a wild scuffle after the race at Martinsville Speedway in Virginia last weekend.

‚ÄúIt‚Äôs something that‚Äôs been nagging really for years,‚ÄĚ said Hamlin, who turns 39 this month. ‚ÄúIt just got to the point where it was really bad, got it scanned and figured out what it was.‚ÄĚ

Dave Nichols Jr., the tire technician for Logano‚Äôs crew who dragged Hamlin to the ground, was suspended by NASCAR and will miss Sunday‚Äôs race in Texas. With crew members around them, the drivers were having a discussion about an on-track incident that suddenly flared into a chaotic confrontation.

‚ÄúI thought that my guys were pretty level to be honest with you through that whole deal. I think you could see quite a few times Joey is right in front of them and no one lays a hand on Joey,‚ÄĚ said Hamlin, adding that he felt Logano‚Äôs crew chief, Todd Gordon, lacked control of his team.

Logano countered that Gordon does a great job leading the No. 22 Team Penske car, and chuckled about Hamlin‚Äôs response when the Gibbs driver was asked if he ever got the feeling Logano knows that he can get to him.

Hamlin, a 15-season Cup Series veteran, is second in the standings with two races remaining to qualify for the title-deciding finale, with Logano fourth. Hamlin has won at Texas three times, including the spring race seven months ago.

After the pending surgery, Hamlin said he will be ready for the 2020 season-opening Daytona 500. He said the recovery time will be 10 weeks; qualifying at Daytona is Feb. 9, which is 12 weeks after Nov. 17 finale at Homestead.

Hamlin said the torn labrum, which is cartilage in the ball and socket joint of the shoulder, was progressively feeling worse late in the summer until he got a cortisone shot several weeks ago.

‚ÄúThat‚Äôs like my saving grace when this thing started hurting, so that really changed. It went from being immobile to feels like there‚Äôs nothing wrong with it,‚ÄĚ Hamlin said. ‚ÄúDoctors came a gave me a little bit of relief with that just to kind of get me into the offseason part of things.‚ÄĚ

Logano was upset at Martinsville after Hamlin squeezed him into the wall during the third stage. The reigning champion wound up with a cut tire and went on to finish eighth.

Admittedly unsatisfied with Hamlin‚Äôs response, Logano smacked Hamlin on the shoulder and turned to walk away. Hamlin took exception and chased after Logano before being taken down by Nichols.

‚ÄúI probably shouldn‚Äôt have gone down there looking for an apology from something that he probably wasn‚Äôt going to apologize for,‚ÄĚ Logano said Friday. ‚ÄúI let my emotions get the best of me, and that‚Äôs a mistake on my part, and I probably didn‚Äôt handle that correctly. It doesn‚Äôt make what he did on the race track right.‚ÄĚ

Asked if they were rivals or long-term enemies, Logano said, ‚ÄúI don‚Äôt know. Time will tell.‚ÄĚ

Hamlin said Friday that the on-track stuff was definitely his fault, and that he had no intention of trying to run Logano into the wall. But he wasn‚Äôt going to let Logano touch him out of the car.

‚ÄúAs a man you can‚Äôt just let that stuff happen,‚ÄĚ Hamlin said. ‚ÄúThat doesn‚Äôt affect me, and we are talking about it right now, but within 30 minutes when I‚Äôm going in there to work, it stops. That‚Äôs my full concentration. .. We go into every race track to win. This weekend is no different.‚ÄĚ