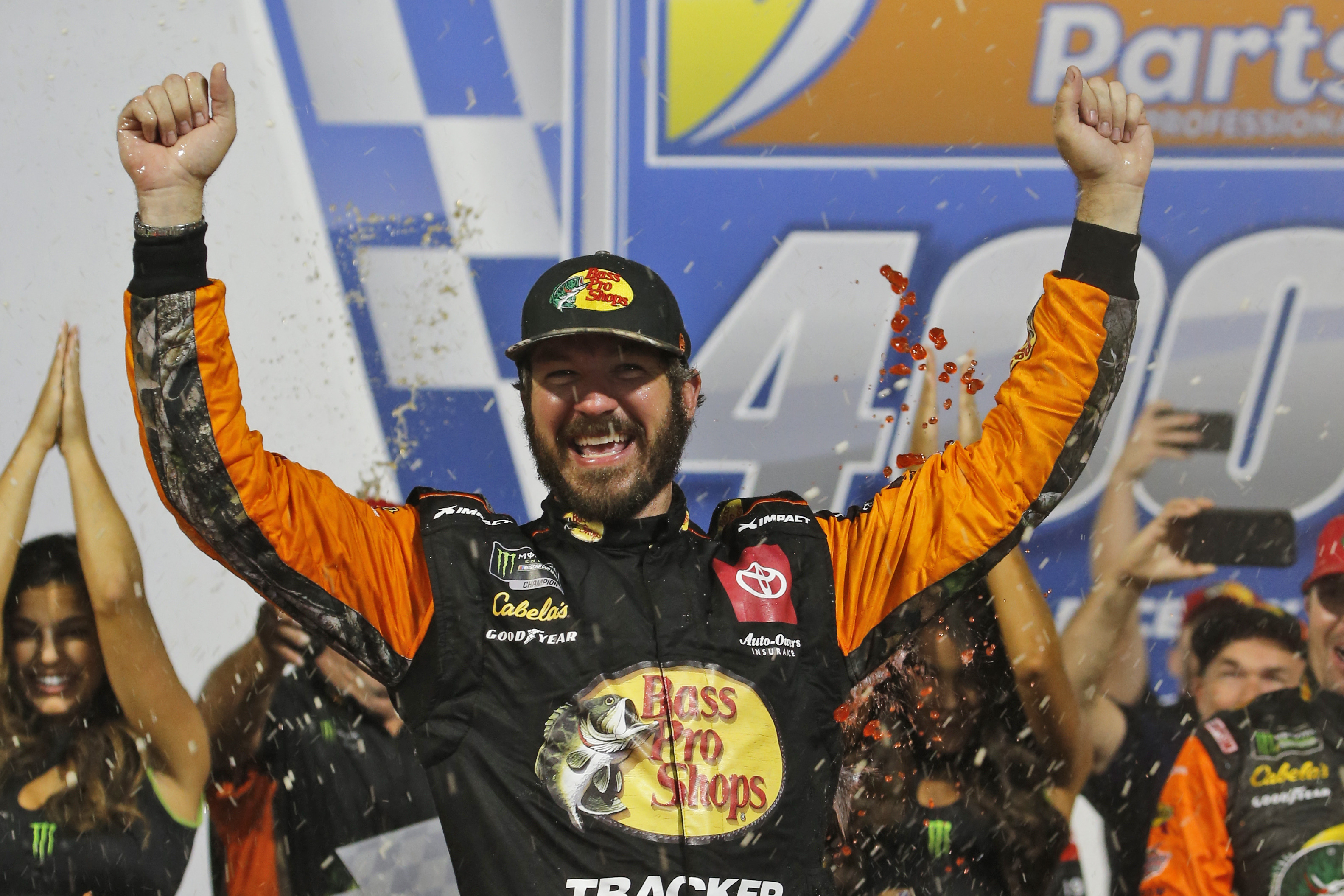 Rankings below are based on a mixture of expected output and DraftKings‚Äô NASCAR salaries for Sunday‚Äôs Hollywood Casino 400 at Kansas Speedway. The ordering is not based on the highest projected fantasy totals, but rather by value of each driver.

1. Martin Truex, Jr. ($10,800) ‚Äì Las Vegas and Kansas are not the same, but they‚Äôre similar enough in this package. These two tracks are wide and steeply banked near the wall. This creates a specific type of racing in this package, and Truex won at Las Vegas a couple weeks ago. (5.1 fppk)

2. Kevin Harvick ($11,000) ‚Äì Don‚Äôt bet on Harvick to win, but he likely will score hog points (fast laps and laps led points). Harvick has been a top hog in all of the low-horsepower races at wide intermediate tracks (Las Vegas, Kansas and Chicago). (4.3 fppk)

3. Brad Keselowski ($9,600) ‚Äì In classic Keselowski style, he did not have the best car at the beginning of the race, but he did at the end of the race. His crew chief, Paul Wolfe, is one the best in-race adjusters in NASCAR and is a big reason for BK‚Äôs win at Kansas in the spring. (4.3 fppk)

5. Alex Bowman ($8,600) ‚Äì At the wide tracks where drivers can overcome the wake of dirty air created by the 17-foot spoilers, Bowman has been the best driver in NASCAR. In the first Kansas race, both Dover races and the Chicago race, Bowman worked both lanes to get up front. (4.3 fppk)

7. Joey Logano ($9,800) ‚Äì After failing inspection, Logano easily made his way towards the top 10. Unfortunately, he suffered damage on a restart, and at the wide aero dependent intermediate tracks, that was game over. (4.3 fppk)

8. Chase Elliott ($10,100) ‚Äì Perfectly timed cautions, pit strategy and decent restarts allowed Elliott to jump from the back of the field to the front rather quickly in the spring race. In clean air, Elliott had a race-winning car. (4.2 fppk)

9. Denny Hamlin ($10,500) ‚Äì All of the JGR cars unloaded slow in the first Kansas race. They proceeded to be slow all weekend. Practice speeds will be very important for the JGR cars this weekend. (4.9 fppk)

10. Kurt Busch ($9,000) ‚Äì In two of the past three intermediate track races, Kurt earned more than 25 hog points. That‚Äôs impressive but not helpful because those races were at uniquely shaped outlier intermediate tracks (Kentucky and Darlington). (3.8 fppk)

11. Clint Bowyer ($8,800) ‚Äì It‚Äôs win or bust for Bowyer, so it‚Äôs likely bust. Bowyer has not won at a 1.5-mile track race in years, but that doesn‚Äôt mean he‚Äôs not in play. Positive place differential and a top-10 are possibilities, but he‚Äôs more of a contrarian play . (3.2 fppk)

12. William Byron ($8,200) ‚Äì It looks like his playoffs are coming to an end. Talladega will do that. Byron needs to win this weekend, but his car is not the fastest and he‚Äôs not the best driver. (4.2 fppk)

13. Ryan Newman ($7,300) ‚Äì The first Kansas race was one of Newman‚Äôs worst races of the season, but that‚Äôs merely from the standpoint of finishing position. Newman had a top-15 car, but an uncontrolled tire on a green flag pit stop ruined his race. (4.9 fppk)

14. Erik Jones ($8,400) ‚Äì Despite JGR‚Äôs struggles at Kansas, Jones was in a position to battle for the win at the end of the race. Much of this had to do with late-race cautions, but Jones was fast enough to be in a place to benefit. (3.7 fppk)

15. Chris Buescher ($6,700) ‚Äì Does this racing package suit Buescher? No one knows. Does this package suit the JTG Daughtery engineers? No one knows. An explanation of Buescher‚Äôs solid season has never been given, but what‚Äôs that matter? He‚Äôs been great in the high-downforce package. (4.1 fppk)

18. Jimmie Johnson ($8,000) ‚Äì Dover is over. It‚Äôs his best track and it makes sense Johnson ran well at Dover and not anywhere else this season. Kansas is anywhere else just like Talladega was last week, and that anywhere else race ended up in a DNF. (3.3 fppk)

19. Daniel Suarez ($7,500) ‚Äì He‚Äôs nothing more than a slightly better version of Danica Patrick. An average stock car driver that earns average results in very good equipment. When he runs a clean race, he‚Äôs anywhere from a seventh- to 15th-place driver. (4.0 fppk)

20. Ricky Stenhouse, Jr. ($7,000) ‚Äì This is a Stenhouse race track, if he unloads with a decent car. The wide track plays to one of Stenhouse‚Äôs few skills ‚Äî working multiple grooves. While most drivers seem wedded to the bottom, Stenhouse can find clean air running a higher line. (2.8 fppk)

Put your knowledge to the test.¬ÝSign up for DraftKings¬Ýand experience the game inside the game.

« Rescuers rush to save birds that hit NASCAR Hall of Fame, as theories emerge on cause – Charlotte Observer Teammates Eckes, Self to decide ARCA Menard Series title at Kansas – NASCAR »