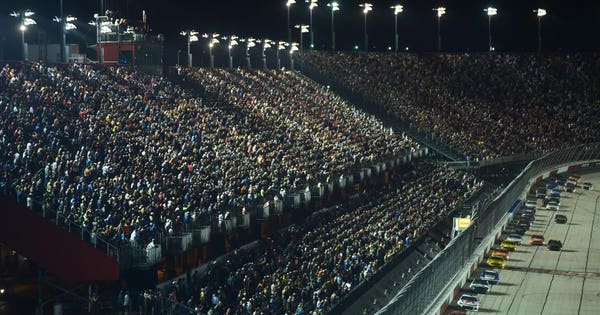 Brad Keselowski leads a pack of cars before a packed house during the Southern 500 at Darlington Raceway on September 1, 2019.

Three hours before the 70th Southern 500 was scheduled to start on Sunday night, Darlington Raceway announced that all 47,000 reserved seats for the NASCAR Cup race at the historic South Carolina race track had been sold.

The stands at Darlington, the egg-shaped oval that opened in 1950 and touted as ‚Äútoo tough to tame,‚ÄĚ held 58,000 a year ago, according to the 2018 annual report from its parent company, International Speedway Corp. So late word of a sellout at a track with reduced seating might not seem like a big deal.

But this was a big deal, even though the race turned out being delayed four hours by rain and was finally won by Erik Jones just before 2 a.m. Monday.

Aided by a popular, five-year-old ‚ÄúThrowback Weekend‚ÄĚ theme that pays tribute to NASCAR‚Äôs glorious old days, Darlington appears to have found a sweet spot with paying customers. Packed stands for a race on a holiday weekend looked awfully good on TV, and the fans stuck around. It was an fantastic scene, evocative of the old days.¬†

Darlington lost its second yearly Cup race after the 2004 season, and the only race bounced around on the schedule before landing on Labor Day Weekend in 2015. It appears to be a good match: The 2020 race, which will open the playoffs, is set for the holiday weekend.

What happens to this race, and all the others, in 2021, is still to be announced by NASCAR. Stock-car racing won‚Äôt ever be what it was, but NASCAR has equilibrium this year, maybe even a little momentum, with live attendance and television ratings.

People don’t seem to be racing away, as they were in 2018. Some places, like Bristol, another famous old track, seem destined for one annual race, not two. And that is fine. NASCAR is finding a balance.

Darlington Raceway President Kerry Tharp said in a news release announcing the sellout: ‚ÄúDarlington‚Äôs Throwback Weekend continues to grow in popularity each year, and we appreciate and thank our fans for their continued support.‚ÄĚ

Joey Logano leads Kevin Harvick during the Southern 500 at Darlington Raceway on September 01, 2019.

There are not as many seats as there used to be, but the people at Darlington have worked hard at putting together a desired product that sells all the seats they have. Except for Daytona and Talladega, most Cup races appear to be drawing between 40,000 to 50,000.

About 50,000 are expected for next Sunday‚Äôs Brickyard 400 at the Indianapolis Motor Speedway, only about one-fifth of capacity. In the old days, NASCAR sold out the place. But NASCAR has settled at a plateau there, too, after it appeared as the exodus would continue.

NASCAR has taken a lot of hits, some of them deserved, from alienated fans who have grumbled about how stock-car racing has been homogenized and franchised to the point where it lost its roughneck country charm. But old tracks like Darlington are still there, which is cool.

Darlington is a quirky, rural track, with wider turns at one end of the track than the other because Harold Brasington, who built the track, promised the farmer he bought the land from that he would not disturb a minnow pond at one end of the property. (The pond is long gone.)

Brasington envisioned a Southern version of Indianapolis, but Darlington, a 1.366-mile oval, became a famously tough track to drive, and, just as important, an entertaining place to watch car racing. Darlington is not near a big city, but it is sort of a bucket-list destination.

NASCAR has done a better job lately marketing its unique heritage with its tight competition. At the same time, NASCAR is really trying to be more progressive and inclusive, which irritates the yahoos among the old-timers, who thought they had it all to themselves.

They never did have it all to themselves. Most NASCAR fans, I have learned, just enjoy watching the races and don‚Äôt spend too much time sweating political and social ramifications. They just want to go to a spectacle and be entertained. Or they will shut it off, or stay home.

NASCAR could use some good PR, and bleachers filled with paying fans — like the ones at Darlington, which is also known as ‚ÄúThe Lady in Black‚ÄĚ — are the best PR you can get these days. There are other things that still need to be fixed, but the list is not as long.¬†