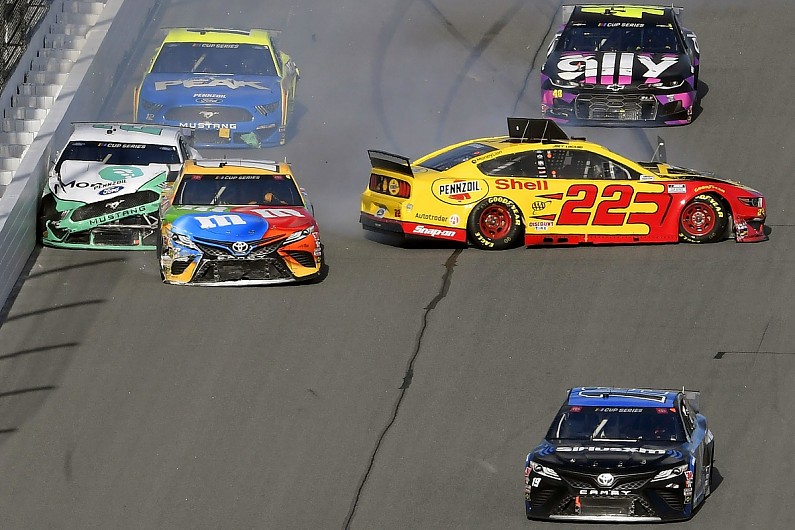 Logano attempted to block a run from 2019 NASCAR Cup champion Kyle Busch with less than 10 of the originally scheduled 75 laps remaining in the controversial race, which was finished by just six cars.

Busch forced the issue and the two collided, resulting in a three-car incident that ended Keselowski’s race.

“I just got wrecked for no reason,” said Keselowski.

“Dumb, dumb racing. Dumb moves being thrown out there.

“Guys that don’t know what they are doing so they throw crazy blocks.

“It is just ridiculous. We shouldn’t be wrecking all these cars.

“I am not Tony Stewart, I am not as smart as he is and he can say it a lot better than I could but this is just dumb.

“We had a good race car. [It] was capable of winning the race, led a lot of the race and we got destroyed for no reason.”

He later added: “You would think these guys would be smarter than that.

“I get in wrecks all the time and I cause them, but [this is] the same one over and over again.

“Somebody throws a stupid block that is never going to work, and wrecks half the field.

“Maybe we need to take the helmets and seat belts out. Somebody will get hurt and then maybe they will stop driving like [this].”

Asked to clarify if he was referring to his own team-mate, Keselowski reiterated that he thought Logano’s block was a “dumb move”.

“There is no reason to make that move,” he said.

“It was never going to work and it didn’t.

“It was just dumb to take out the best car for a move that was never going to work.”

The race was won by the badly damaged Toyota of Erik Jones, while the highest-placing Ford driver was Clint Bowyer in third.

When asked if he planned to talk with his team-mate, Keselowski said: “I am going to Disney World with my family. I will worry about that later.”

Logano retired from the race after being swept up in another incident, and was classified ninth.

Responding to Keselowski’s criticisms, he said: “Apparently we all suck at this because there are only like three cars left right now, so I wouldn’t say anyone is really good.”

Asked if he intended to discuss the incident with Keselowski, he said: “Well, I am going to Disney too, so I will see him there.

“I am sure he is fine. We get along fine.