Richard Petty is not one to shy away from autograph sessions.

‚ÄúThe King of NASCAR‚ÄĚ spent several hours with fans Friday at the Mecum Auctions at the Pennsylvania Farm Show Complex in Harrisburg. The auction of historic cars runs through Aug. 3.

Two cars – a 1970 Plymouth Superbird and 1971 Plymouth Road Runner – both once driven by Petty, are among the cars being auctioned off during the event. The cars are part of a collection of historical race cars.

Mecum has said the Road Runner could fetch between $1 million and $1.5 million. During the auction about 1,200 cars will be available, many of them rare, historic and extremely valuable.

You don‚Äôt have to be a bidder or seller to come to Mecum Harrisburg. The event is open to spectators, with doors opening at 8 a.m. each day. Spectator tickets are $20 in advance and $30 day-of. Children 12 years old and younger are free. Tickets can be purchased purchased online at mecum.com/auctions/harrisburg-2019 or at the door.

If you do want to bid, you‚Äôll have to register online at mecum.com/auctions/harrisburg-2019. Registration fee includes two admission tickets for all four days of the auction event. 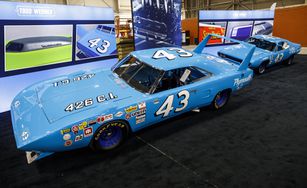 Mecum Auction in Harrisburg: NASCAR to rare muscle cars on the auction block

It‚Äôs more than just cars though, the auction will also feature lots filled with road art including the Curt Cunningham Neon Collection and numerous Coca-Cola collectibles.

In the Farm Show Complex parking lot, Dodge Thrill Rides will be in operation through Saturday with access included with the price of admission.

Can‚Äôt make Mecum but want to see the action go down? The auction will be broadcast on NBC Sports. Here‚Äôs a listing of when it‚Äôll be on air: