Martin Truex Jr secured his spot in the next stage of the NASCAR Cup Series playoffs by winning the first race of the post-season at Las Vegas Motor Speedway.

The Joe Gibbs Toyota driver came to the fore in the second stage of the 267-lap race and was consistently the fastest car on track as night fell.

Truex finished the first stage of the race in eighth place, but worked his way to the front to pass a previously dominant Joey Logano in the final laps of the second stage.

Logano came across Leavine Family Racing’s Matt DiBenedetto, who was a lap down but didn’t make life easy for the leader and aided fellow Toyota driver Truex as he took the lead.

In the final stage Truex initially battled for first place with Chase Elliott, but dropped back to fifth in fewer than 10 laps.

He returned to the lead after the final round of green flag pitstops, breezing past Kevin Harvick around the outside of Turn 2 with 20 laps to go.

Since stage racing was introduced ahead of the 2017 season, every single stage two winner at Las Vegas has gone on to win the race – a trend Truex continued.

Harvick, who led 47 laps and spent much of the night in the top five, finished second, ahead of Brad Keselowski – the only one of the three Penske runners to not lead a lap.

Elliott led 12 laps in the final stage and finished fourth, ahead of another brief race leader in Ryan Blaney.

Alex Bowman was sixth, followed by his Hendrick Motorsports team-mate William Byron – who survived a spin that brought out the first regular caution of the race.

Kyle Larson, Logano, and Ryan Newman ensured that the top 10 positions were locked out by playoff drivers.

Aric Almirola and Denny Hamlin, who are both also in playoff contention, led three laps apiece but missed out on the top 10. They finished 13th and 15th respectively. 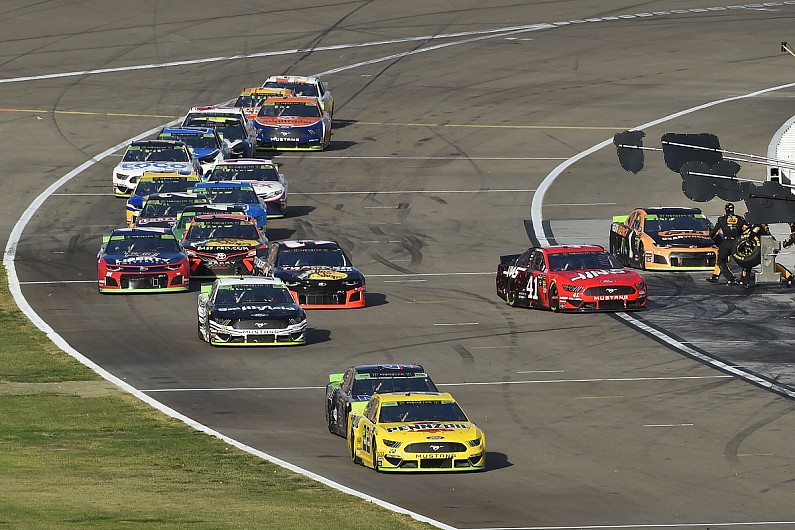 Logano’s ninth place finish came despite him leading a race-high 105 laps and winning the first stage.

The Penske Ford driver made up 21 positions to move from 22nd to first in just 34 laps.

But after being narrowly beaten by Truex in the second stage, contact with Daniel Suarez in the opening laps of the third stage ended his hopes of a third win in 2019 and a second-straight Las Vegas victory.

Suarez led 29 laps after passing Stewart-Haas team-mate and polesitter Clint Bowyer on the second lap of the race but eventually finished 20th following the contact with Logano and slowing to stretch his fuel in the final laps.

Bowyer ended up only 25th after a difficult night. He struggled with the handling of his Ford Mustang all race, and his run was further complicated by a cut tyre in the final stage.

Regular season champion and early title favourite Kyle Busch had a torrid race, beginning with hitting the wall on just the fourth lap. A pitstop to fix the resulting damage dropped him a lap down – where he would remain for 171 laps.

Although Busch did manage to return to the lead lap towards the end of the race, contact with a backmarker caused splitter damage and dropped him back once more. He eventually finished 19th, one lap down.

His brother, fellow playoff contender Kurt Busch, was the only retirement in the race.

The 2004 series champion made contact with Truex and Elliott on a restart and cut a tyre. He was immediately called to the pits in anticipation of a puncture – as had happened to Byron, which had brought out the prior caution – but he never made it there, slamming into the Turn 3 wall.