Lorenzo’s battle back from injury – against his subconscious – Motor Sport

What‚Äôs wrong with Jorge Lorenzo? Has he lost it or is he merely waiting till his back is fully fixed? And why HRC‚Äôs plans for its 2020 RC213V should give cause for optimism 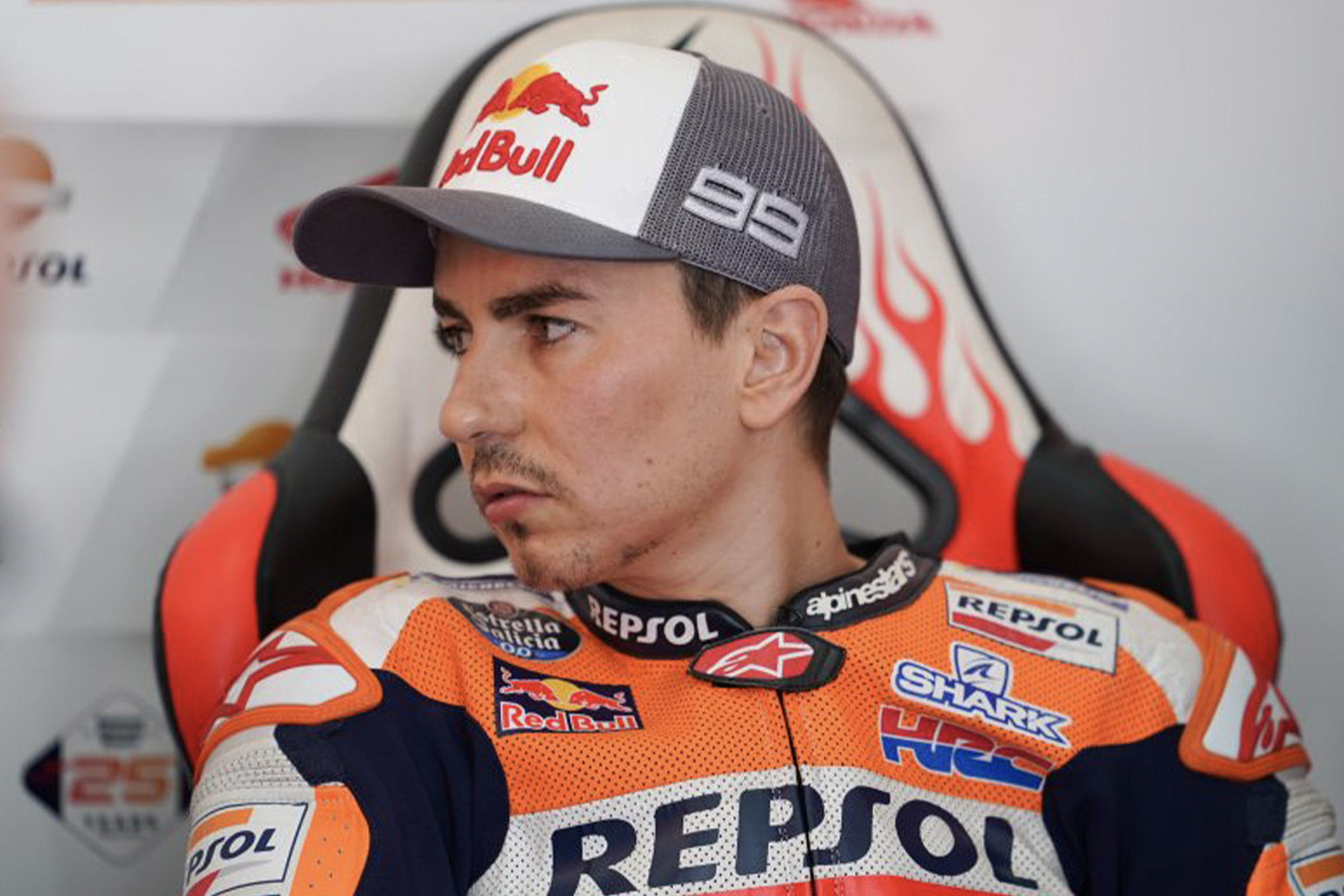 Lorenzo‚Äôs 2019 season isn‚Äôt easy on the track or in the garage Photo: Repsol Honda

The MotoGP paddock and fans around the world are agog with talk of Jorge Lorenzo. What‚Äôs up with the three-times MotoGP world champion? Has he lost it? Why doesn‚Äôt he retire? Why hasn‚Äôt he been sacked? Why don‚Äôt they put Johann Zarco on his bikes?

It must be said that the three-times MotoGP king is in a hole. A very deep hole. At Phillip Island two weeks ago he finished more than a minute (one minute!) behind winning team-mate Marc M√°rquez.

Last Sunday at Sepang, the 32-year-old Spaniard finished 34 seconds down. After the race he outlined his target for next week‚Äôs season-ending Valencia GP: ‚Äúwe are getting closer and closer to the goal of being 30 seconds from the winner‚ÄĚ.

Something is obviously very amiss. But what is it? It‚Äôs been obvious since the start of the season that Lorenzo doesn‚Äôt get on with Honda‚Äôs 2019 RC213V. However, his body is also in a mess. The last time he was fully fit was when he was sat on the grid at Aragon in September 2018, before he fell at the first corner

Two weeks later a huge crash at Buriram caused serious ligament damage to his left wrist, which demanded surgery. The after-effects of that operation caused his left scaphoid to snap during winter training, which hampered him at every race, until he broke his back at June‚Äôs Dutch TT.

His disastrous results since his return from injury aren‚Äôt simply because he doesn‚Äôt feel confident on his bike. They are due to the fact that ‚Äď and there‚Äôs no nice way to put this ‚Äď he doesn‚Äôt want to spend the rest of his life in a wheelchair. His Assen crash was uncomfortably similar to the fall that paralysed Wayne Rainey from the chest down in 1993.

Lorenzo‚Äôs two fractured vertebrae ‚Äď which began to crack when he crashed heavily during post-Catalan GP testing at Barcelona ‚Äď still hurt. His surgeon says the breaks are healed, but if he still feels pain, how can he convince himself that if he has another big accident he won‚Äôt break his spine? That right there is his biggest problem, because a broken back is very different to a broken arm or leg.

The best way to illustrate Lorenzo‚Äôs situation is to compare his results from before and after Assen.

Lorenzo finished the season-opening Qatar GP 14 seconds behind the winner. In Argentina (where he was last away after accidentally engaging the pit-lane speed limiter) he finished 27 seconds down. At Jerez, Le Mans and Mugello he took the flag, 18, 15 and 20 seconds down. Bad results, but at Barcelona he was only four-tenths down in free practice, which may explain why he got over-excited on the first lap and ended up taking out Andrea Dovizioso, Maverick Vi√Īales and Valentino Rossi.

On his return at Silverstone where he was in ‚Äúhigh pain with my back‚ÄĚ he finished 56 seconds behind the winner. At Misano, Aragon, Buriram and Motegi he was 47, 46, 54 and 40 seconds down. At chilly Phillip Island he was caught in the cold-tyre Catch 22 (see last week‚Äôs blog) and finished 66 seconds behind winner M√°rquez.

These are beyond disastrous results, but when you frame them in the context of someone who‚Äôs worried about breaking his back, they look a bit different. 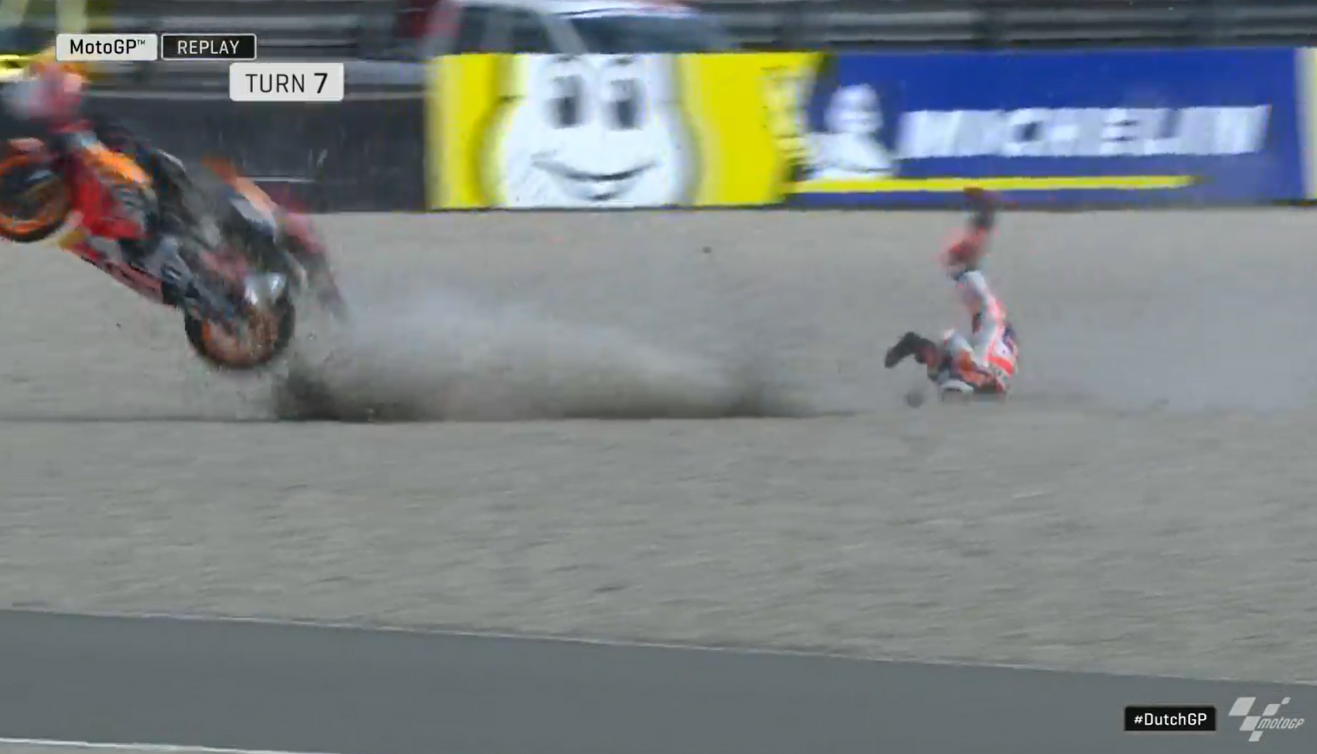 So why is Lorenzo even riding? Why didn‚Äôt he take the rest of the year off and get strong for 2020? Because riders are notoriously insecure about losing their rides, especially when they‚Äôre not getting great results. They know how racing works ‚Äď leave your seat empty for five minutes and someone else will take it. Then there‚Äôs the small matter of collecting your wages.

Lorenzo has always been in his own man. You might say he lives in a bubble ‚Äď let‚Äôs call it Lorenzo‚Äôs Land ‚Äď where he is oblivious to the thoughts and concerns of outsiders. He has his own game plan, which involves no one else. Thus when critics suggest he should retire he doesn‚Äôt even notice.

‚ÄúThe criticism doesn‚Äôt affect me so much,‚ÄĚ he said at Sepang.

Presumably (because no one else knows) Lorenzo‚Äôs current game plan is to work step by step towards preseason testing in February 2020.

Until then, only one thing matters to him: looking after his spinal cord.

‚ÄúI guess I‚Äôm conscious of it ‚Äď your brain prevents you from pushing to the limit,‚ÄĚ he added. ‚ÄúI still feel pain, even when I‚Äôm lifting weights in the gym. Until I feel okay and I don‚Äôt feel any pain, then my subconscious won‚Äôt change the chip that tells me: okay, now I feel normal again, now I can push.‚ÄĚ

Most MotoGP riders, including Lorenzo on a normal day, push to within 99.9 per cent of the limit every time they ride out of pit lane. That means they are always 0.2 per cent away from going over the limit. That‚Äôs life on a knife-edge, which is where Lorenzo cannot afford to live at the moment.

Before Assen, Lorenzo‚Äôs average race-lap deficit to the winner was 0.7 seconds. Since he fractured those two vertebrae the gap has tripled to 2.1 seconds. That‚Äôs how slow you need to go to make sure you don‚Äôt crash.

‚ÄúWhen you have such a huge injury you do have your doubts ‚Äď these thoughts do cross your mind. But once you start feeling better you say, okay, I want to start again and do what I‚Äôm able to do.‚ÄĚ

This is an important point to remember. Top racers don‚Äôt think like you and me. They would never scale the heights they do with an everyday mindset that habitually takes the path of least resistance.

If you or I were Lorenzo we would tell ourselves: I‚Äôve won five world titles, I‚Äôve got tens of millions in the bank and I‚Äôm 32-years-old. You know what? I feel like kicking back in a luxury beachside villa in Bali for a few months. Then perhaps I‚Äôll try the Caribbean. And who knows where after that, but‚Äôs time to relax and enjoy the fruits of my toils‚Ä¶ 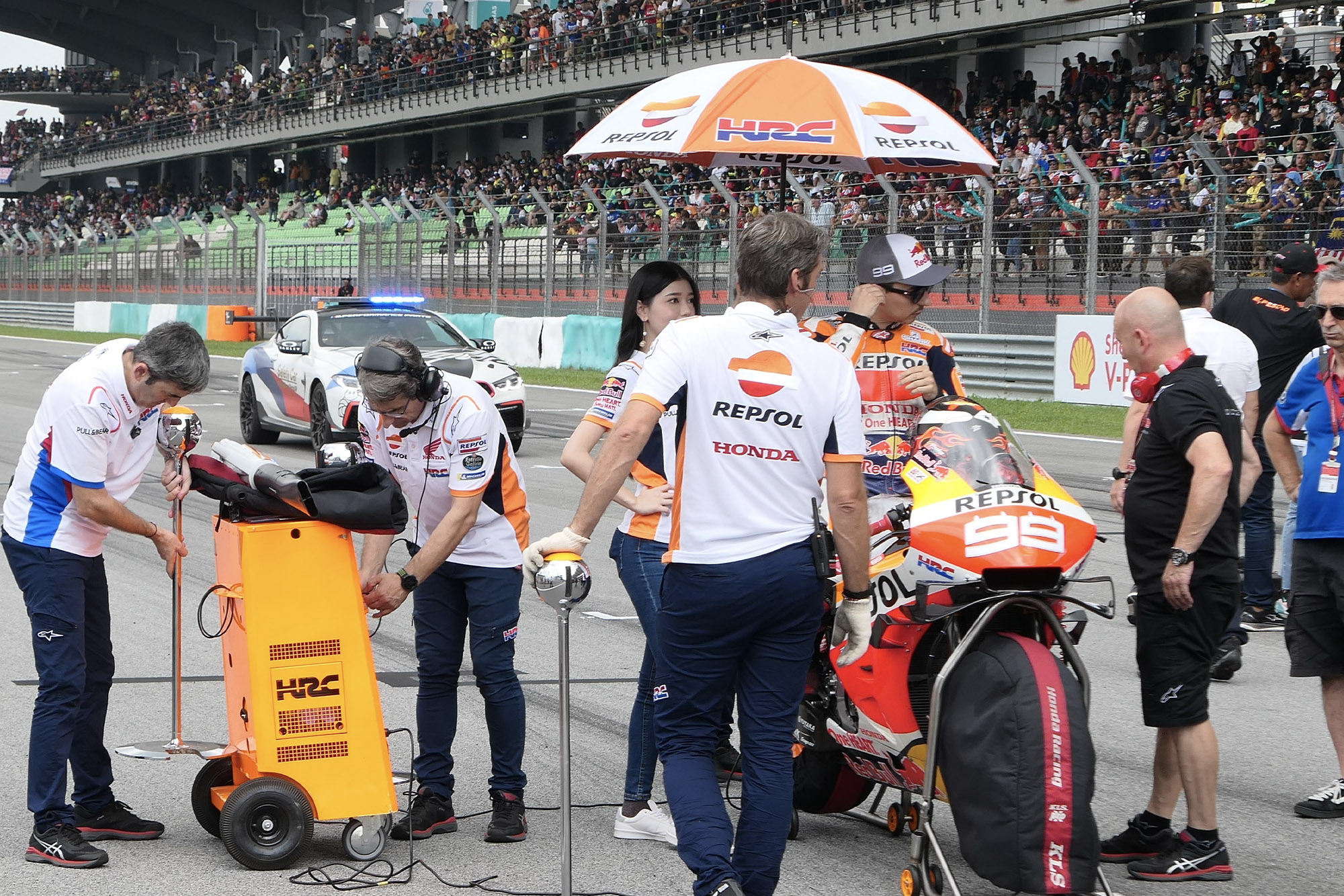 Lorenzo on the back row of the grid in Sepang¬†Photo: Oxley

Lorenzo insists his daydreams haven‚Äôt got that far. Thus we can only assume that he is working towards changing the chip in his brain early next year, once he is certain his spine is as solid as it needs to be.

‚ÄúIt will come together,‚ÄĚ he explained. ‚ÄúThe feeling that I‚Äôm 100 per cent will give my subconscious the mood to flow more, it will allow me to risk more and I will be able to train harder in the gym, so I‚Äôll arrive at the track in better physical condition.‚ÄĚ

If Lorenzo does get that far there‚Äôs only one other question: his motorcycle.

Honda‚Äôs RC213V has never been an easy ride, especially for someone who goes fast by riding smooth, gliding lines.

So what are the chances of HRC building a 2020 bike that works for Lorenzo? Possibly better than you might think.

M√°rquez, Lorenzo and Cal Crutchlow have all tried early prototypes of the 2020 bike and didn‚Äôt notice much difference. But HRC says its final prototype RC213V will have a different chassis with revised geometry and centre of mass.

HRC knows it needs to make the changes. Its 2019 RC213V featured a major boost in horsepower and torque, which helped M√°rquez dominate the championship. However, making big changes to a motorcycle‚Äôs engine performance usually affects chassis performance.

The 2019 RC213V has much more torque than the 2018 bike. And when you increase torque you increase negative torque. This is why all three HRC riders ‚Äď to varying extents ‚Äď have struggled with corner entry, because the 2019 engine has more engine-braking, which affects corner entry.

‚ÄúI think the 2019 bike engine creates some kind of difficulty entering the corners, so it doesn‚Äôt give the rider the same feeling with the front,‚ÄĚ revealed Lorenzo. ‚ÄúThis is why I suffered some big crashes, losing the front at high speed. But some riders who ride more with the rear wheel, like Marc, have struggled less with the bike.

‚ÄúI hope the new bike will fix these negative aspects and I think Honda understand what they must do to solve the problems. It‚Äôs not only me saying these things ‚Äď Cal and even Marc say more or less the same things. Our comments are not the opposite, they are quite similar. The only difference is that Marc is winning and we are very, very far away! But it‚Äôs one thing to know where your problems are and why you are failing, it‚Äôs another thing to solve them on the racetrack.‚ÄĚ

There may be some people that want Lorenzo gone, but HRC engineers consider him a technical challenge, like Dani Pedrosa, his predecessor at Repsol Honda. Pedrosa is the size of a 14-year-old boy but HRC nearly made him MotoGP champion on a bike that was three times heavier than him.

The inside of Lorenzo‚Äôs brain will be an interesting place in the coming months. Perhaps one hemisphere of his consciousness will occasionally be disturbed by thoughts of palm-fringed beaches on Bali, while the other waits for February, hoping that HRC is building a bike that will allow him to return to his former greatness.