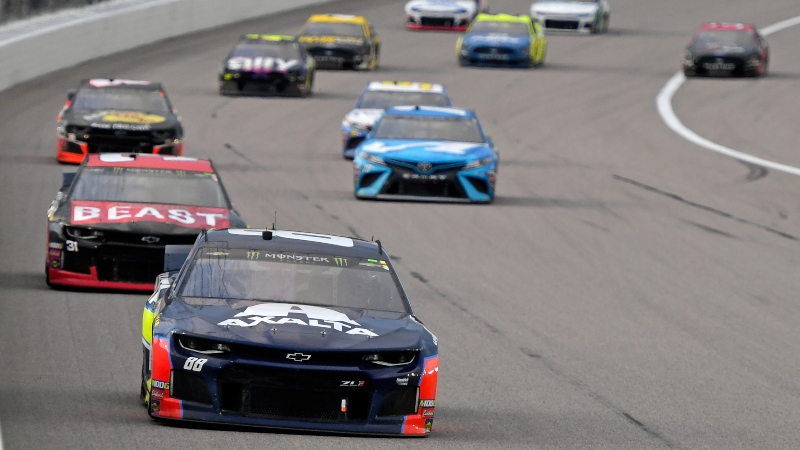 Last week we pegged Michael McDowell and his 100-1 odds as a soild bet to make before cars hit the track at Talladega. McDowell gave us a nice sweat, contending for a win on the final laps before ultimately finishing fifth.

Not bad, especially considering The Action Network‚Äôs Nick Giffen also steered us to Ryan Blaney ‚ÄĒ the eventual race winner at 20-1 ‚ÄĒ to make it an extremely profitable weekend.

With superspeedway racing done until the 2020 Daytona 500, those triple-digit longshots worth betting become scarce, but that doesn‚Äôt mean there still aren‚Äôt mispriced drivers to jump on early in the week.

Odds for Sunday‚Äôs Hollywood Casino 400 at Kansas Speedway are now available at the Westgate SuperBook in Las Vegas, and there is one driver I‚Äôm betting immediately.

When the Monster Energy NASCAR Cup Series (MENCS) visited Kansas back in May, Kevin Harvick had the fastest racecar, but Bowman was clearly the second best.

Bowman finished second in that race, was tied for the best average running position (6.0) with Chase Elliott and Ricky Stenhouse Jr., ran the second-most fast laps (37) and led the second-most laps (63) overall.

Despite his speed last go-round at Kansas, there are currently eight drivers with better odds to win on Sunday.

My first thought as to why Bowman was listed so far down the odds board related to the MENCS schedule.

The current schedule is front-loaded with 1.5-mile tracks like Kansas ‚ÄĒ just one of the last 12 races took place at a 1.5-mile track (Las Vegas on Sept. 15) ‚ÄĒ and the evolution of technology, setups and information could mean that Bowman hasn‚Äôt been as good at this track type since that runner-up finish.

But as usual, I was wrong. I looked at past five races run at 1.5-mile racetracks (Kansas, Charlotte, Chicagoland, Kentucky and Las Vegas) and the No. 88 Chevy is still statistically one of the best cars.

Over those five races, Bowman has the best average finish (6.6) and the third-best average running position (10.8), while ranking second in laps led (159) and sixth in fast laps (92).

In fact, Bowman secured his first career victory at Chicagoland Speedway in June.

While I don‚Äôt think Bowman should necessarily be listed among the favorites, his current odds of 25-1 are offering enough value to bet early. This is a great way to start a betting card with a driver fully capable of having top-five speed on Sunday, while also leaving plenty of bankroll room to continue adding drivers throughout the weekend.