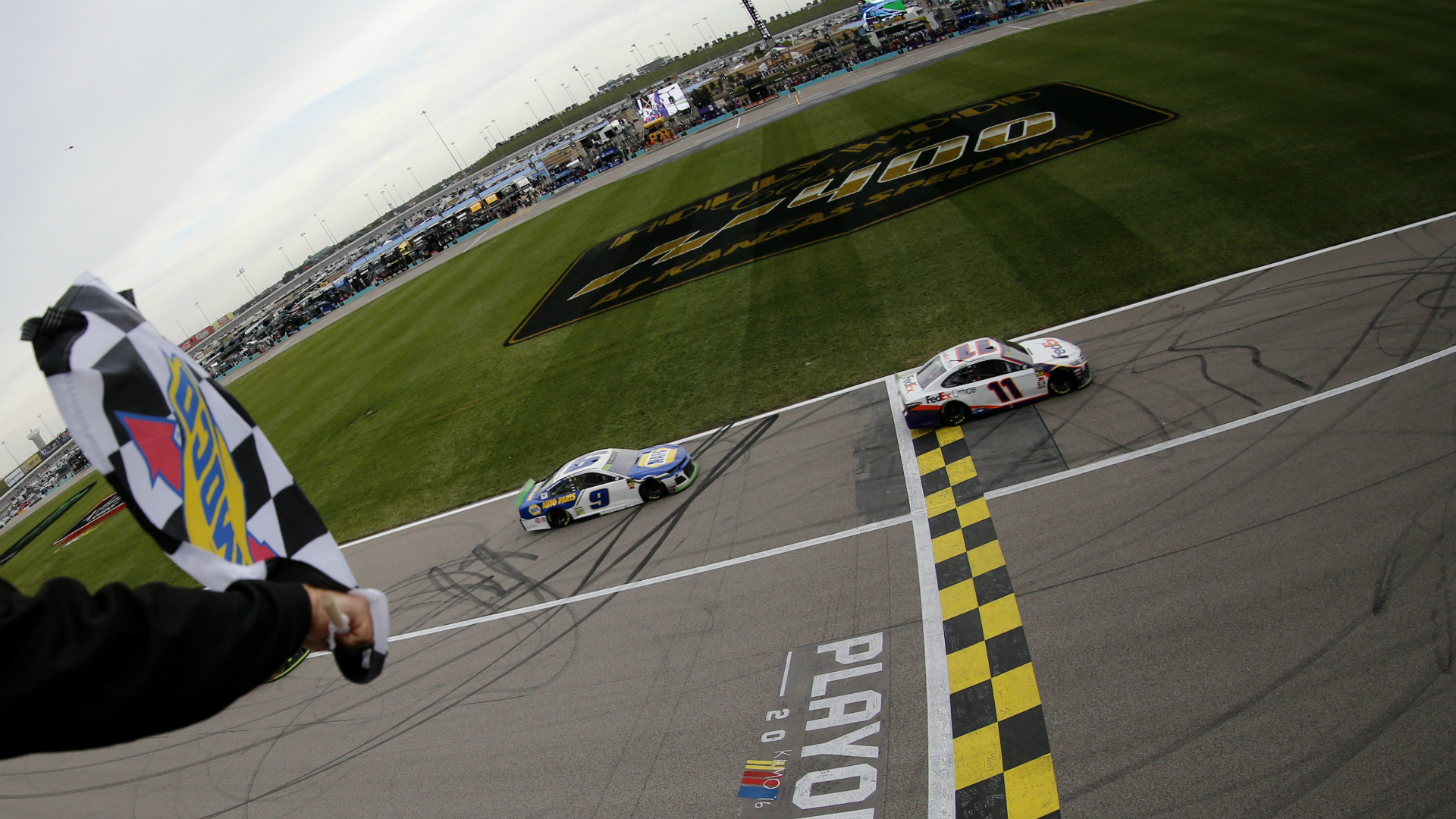 The second round of the NASCAR playoffs was headed toward an uneventful end Sunday with about a dozen laps remaining in the Hollwood Casino 400 at Kansas Motor Speedway.

ThenÂ a caution caused by Ryan Blaney forced a restart. There would be two more yellow flags and two overtimes before the checkered, all of which shook up the playoff picture. The dramaÂ didn’t affect Denny Hamlin, who was leading at the time of Blaney’s caution and went on to win the race.

Chase Elliott couldn’t pass Hamlin, but he took advantage of the restarts to finish second and take the eighth and final spot in the Round of 8 away from Brad Keselowski.

“The good news was the bottom lane rolled good enough on the last restart to at least get back to second,”Â Elliott said. “So I appreciate the effort. We were really struggling there at one point in the race. You have to stay fighting in these things, especially with these late-race restarts.”

The race nearly ended after one overtime, but a caution came out a split-second before Hamlin crossed the start-finish line to accept the white flag.

That was bad news for Joey Logano, who was in a playoff position but had gone deep into the infield as he tried to avoid the crash around him. It seemed the wreck may have cost him a chance at the championship, but he pitted to repair damage and held on to seventh place in the standings on the final restart.

Keselowski âÂ who made the contact that caused the final caution â began the restart in playoff position, and it seemed Elliott would have to win the race outright to advance. But Keselowski lost several spots over the final three laps, allowing Elliott to finish second and still be one of the final eight drivers in the playoffs.

“I needed to get up to the top of the track on the last restart. I couldn’t get up. I got sandwiched. Somebody went three-wide and got me in the middle of (Turn) 4 â just all bad.” Keselowski said.â

Sporting News provided live updates, highlights and results from the Hollywood Casino 400. Follow along in real time below.

Material from the NASCAR Wire Service was used in this report.

5:52 p.m.: CHECKERED. Hamlin wins, Elliott and Logano advance. Keselowski dropped a handful of spots after the restart, and his playoff chase is over.

5:43 p.m.: CAUTION. We’ll do it again. Logano dives way into the infield to avoid a wreck, and that may cost him dearly. Keselowski got into Suarez to start the wreck but doesn’t seem to have taken much damage.

5:40 p.m.: After the caution pits, Keselowski is up one point on Elliott. Elliott will restart in second, Keselowski in 15th.

5:35 p.m.: CAUTION. Bubba Wallace’s car fails him, it seems, and there’s a couple of other cars that get caught up in it as well. Keselowski needs to pick up a couple of spots off this restart in overtime, but he’ll likely pit while it’s unclear how many other cars will. Plus, Elliott is running in second and could just win it.

5:33 p.m.: Nearly a massive pileup at the front of the field, and Elliott ends up where he needs to be to advance.

5:31 p.m.: Elliott gets four tires, while many ahead of him only get two â including Byron. Keselowski doesn’t pit.

5:24 p.m.: CAUTION. Blaney gets into the wall, and his tire eventually ends up all over the track. We’ll get the restart that was necessary to open up a chance at some late-race excitement. There are 13 laps to go.

5:14 p.m.: Elliott, running eighth, needs to move up three spots to beat Keselowski (as of now). But he’s more than three seconds behind Larson in seventh. Byron, who almost certainly needs a win to advance, is running fifth. He’s more than five seconds behind the leader, Hamlin.

5:10 p.m.: Hamlin laps Keselowski, whose lead been bumped back up to three points.

4:45 p.m.: The focus shifts to the battle for the eighth and final advancing spot: Keselowski (running 16th) leads Elliott (running fifth) by three points. Given those running positions, Elliott may just need to win the race outright.

4:30 p.m.: CAUTION. That stage win secures Hamlin’s spot in the final eight, and Martin Truex’s third-place finish does the same for him.

Others getting stage points:

4:14 p.m.: Unfortunate development for Larson, who is hit with an uncontrolled tire penalty.

4:11 p.m.: Hamlin takes the lead shortly off the restart.

4:01 p.m.: CAUTION. Larson can’t find a way past Joey Gase â who’s about 10 laps down â and takes matter into his own hands by sending him into the grass.

3:40 p.m.: CAUTION. After the stage ends, Kyle Busch spends a while in the pit to repair some damage picked up on the restart.

3:35 p.m.: Logano takes advantage of the caution to win Stage 1, just ahead of Chase Elliott. Martin Truex Jr. and Kyle Busch are also in the top five.

3:33 p.m.: This caution is good news for Kevin Harvick, who was on the verge of being lapped by Larson. Also good news for Logano, who elects not to pit before the restart.

3:29 p.m.: CAUTION. Ryan Newman goes into the wall with the help of Ricky Stenhouse Jr. Five laps to go in Stage 1.

3:16 p.m.: Logano struggling mightily. His playoff race will be over at this rate.

3:14 p.m.: Larson, the leader, pits in the back half of the first cycle. He stalls as he tries to leave pit road, which will cost him a bit of time.

2:56 p.m.: Bowman and Logano have both taken a bit of damage, which may affect how they run the rest of the way.

2:53 p.m.: Larson and Keselwoski are battling for the lead.