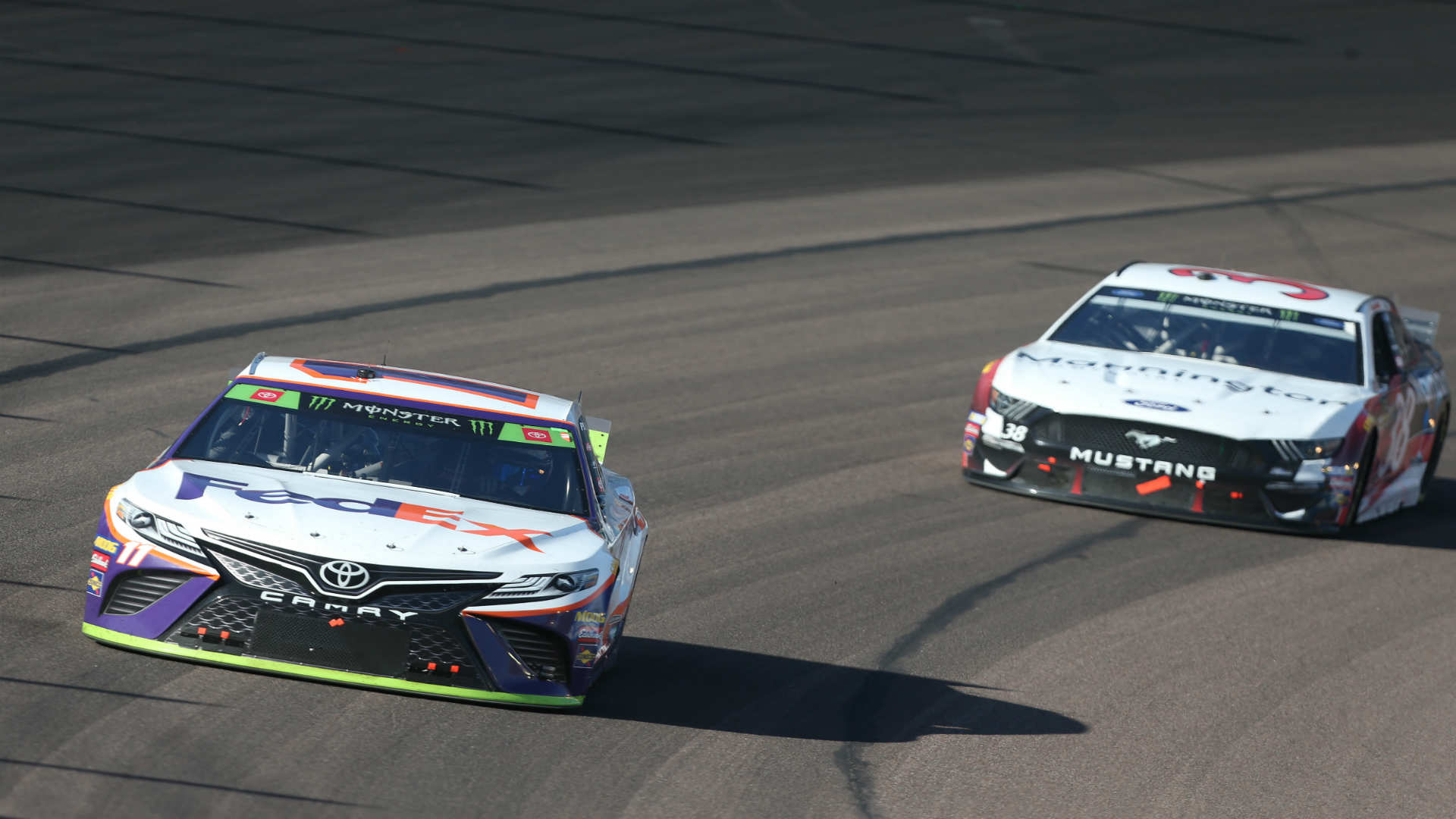 Denny Hamlin entered the Bluegreen Vacations 500 in need of a clutch performance to sneak his way into the Championship 4 field. He delivered in a big way, leading 143 laps en route to a victory at ISM¬†Raceway outside¬†Phoenix.

It appeared for the majority of the afternoon that Hamlin would cruise to the checkered flag. His No. 11 car pushed the lead to over 10 seconds and nipped a number of drivers off the lead lap in a dominating Stage 3.

A late caution caused plenty of drama in the final laps, though. John Hunter Nemecheck, who finished 27th, went into the wall and brought out a yellow flag with just eight laps to go, erasing Hamlin’s comfortable lead. Hamlin was visibly upset when he noticed the flag come out, banging his hand against the steering wheel in frustration.

In championship-like fashion, however, Hamlin responded. He held off challenges¬†by both Busch and Ryan Blaney on a chaotic restart and captured the checkered flag three laps later.

5:34 p.m.: CHECKERED FLAG. Hamlin wins. It will be Harvick, Truex, Hamlin and Kyle Busch in the Championship 4.¬†

5:27 p.m.: CAUTION. John Hunter Nemecheck hits the wall and the yellow flag is out with just nine laps remaining. The flag negates Hamlin’s massive lead and they will have to line it up again. Hamlin needs to win to make the Championship 4. Leaders are in for a pit.

4:59 p.m.: The leaders are beginning to come in for pit stops under green flag with 67 laps remaining.¬†

4:47 p.m.:¬†Logano has slipped all the way to seventh. Hamlin, Kyle Busch and Ryan Blaney is the top three.

4:40 p.m.:¬†Hamlin’s lead is now over four seconds over Kyle Busch, who is three seconds ahead of Logano.

4:31 p.m.:¬†Kyle Busch is now battling Logano for the second position. Just a point between those two drivers separates the Champion 4 cut line.

4:26 p.m.:¬†Logano, Hamlin and Kyle Busch lead the field back on the green flag.

4:18 p.m.: CAUTION. Elliott goes hard into the wall after likely having a tire go down. That¬†will end his 2019 championship hopes.

4:03 p.m.:¬†Hamlin and Elliott are engaged in a multi-lap battle for second. Neither driver is gaining the upper edge.

3:38 p.m.:¬†Elliott mentions on his team radio that he is having a power-steering issue. He still remains in second, 2.5 seconds behind Logano.

3:34 p.m.:¬†Logano takes the lead with Elliott behind him in second.

3:20 p.m.:¬†Keselowski takes the green flag on the restart following the pit stops. Hamlin quickly surges to take over the top spot.

3:18 p.m.: CAUTION. The first caution flag of the day is out on Lap 67 as Ricky Stenhouse makes contact with the wall in Turn 4. The leaders will come in to pit.¬†

2:58 p.m.:¬†Busch’s lead over Hamlin is nearly 1.5 seconds as each of the eight playoff drivers are within the top 10.

2:51 p.m.:¬†Kyle Busch has yet to relinquish the lead after 12 laps and Hamlin has moved up to second (now 17 points off the cut line).

Here is the complete breakdown of clinching scenarios for Sunday’s race.¬†