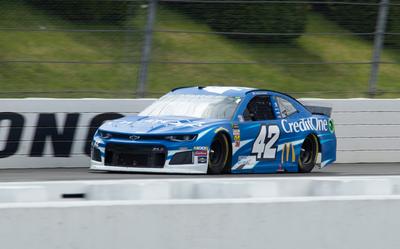 We are back at Pocono for the second time this season, and we get to see the tricky triangle in action.

But first, let’s recap New Hampshire, where Kevin Harvick finally won a race this season. After almost losing his lead to Denny Hamlin, Harvick pulled out the win and gave Stewart-Haas racing its first victory of the season. Can the team continue the momentum through Pocono?

Here at numberFire, we’ve always got you covered for everything NASCAR DFS. Our track preview gives you more information about the history of the track, our driver preview helps bring you up to speed on recent driver history, and our Heat Check Podcast with Jim Sannes gives you insight to how he is approaching this weekend’s slate.

Kevin Harvick ($13,500) – At a track where passing is difficult, why not roster a driver who is starting on the pole and comes in with the best recent form in the field? Coming off last week’s win, Harvick is looking to make it two in a row. Not only is recent form on Harvick’s side, so is track history as he has finished no worse than fourth in his last five Pocono races prior to June’s event. Look for Harvick to provide plenty of laps led points, especially early on.

Joey Logano ($12,500) – If anyone is going to take the lead in a timely manner from Harvick, it is Joey Logano. Logano has certainly had his ups and downs in his Pocono career, especially recently. However, starting in second place, he is in the first row and can get himself to the front very quickly if he is able to time the start well enough. Logano has unperformed quite a bit relative to his driver rating at recent races such as Sonoma and Daytona, but he’s capable of putting it all together this weekend.

Ryan Blaney ($10,700) – Blaney has been one of the hottest drivers on the circuit since Charlotte. Starting in 20th, Blaney is a solid option who offers place-differential upside. It also helps that Blaney ran seventh-fastest of all drivers in second practice. He’s a past Pocono winner and enters having placed in the top 10 in four of his last six races overall. He checks a lot of boxes.

Kyle Larson ($10,500) – Officially, he’ll start 29th, but Larson will be sent to the rear with a backup car. This shouldn’t make much of a difference as there is still a ton of place-differential upside here. Before having some mechanical issues in the June race, Larson was running well. So well, in fact, that he finished the race with the eighth-best driver rating despite placing 26th. Even though Larson did not practice well with his backup car, he’s still a guy we want to target Sunday.

Clint Bowyer ($9,700) – Bowyer ran very well here in June on his way to a fifth-place finish, which was an under-performance relative to his driver rating in the race as he was second in driver rating on the day. Starting in 16th today, Bowyer could go overlooked. However, we have seen earlier this season that the SHR team knows how to get speed at this track. Bowyer needs a good performance here as he is clinging to a playoff spot, and he is a nice GPP option.

William Byron ($8,800) – I love Byron this week. Well, I love him every week. But now that he is not on the pole, his DFS upside is a little higher compared to the June race. In June, he finished with the fourth-highest driver rating despite placing ninth in the race. His practice numbers were great as well, averaging speeds of 169.9 (very nice) miles per hour in second practice, which led the field. There’s a lot to like with Byron in this spot.

Chris Buescher ($7,300) – Another week, another opportunity to roster Buescher. Week after week, he seems to be the ideal value play given how underpriced he becomes relative to his DFS performances. He finished 18th in driver rating here in June, so it is clear that he has the skill to move up the field and provide you with solid place-differential points. He is in play in all formats and can help you afford the studs you want.

Evan Cheney is not a FanDuel employee. In addition to providing DFS gameplay advice, Evan Cheney also participates in DFS contests on FanDuel using his personal account, username theman90210. While the strategies and player selections recommended in his articles are his personal views, he may deploy different strategies and player selections when entering contests with his personal account. The views expressed in his articles are the author’s alone and do not necessarily reflect the views of FanDuel.