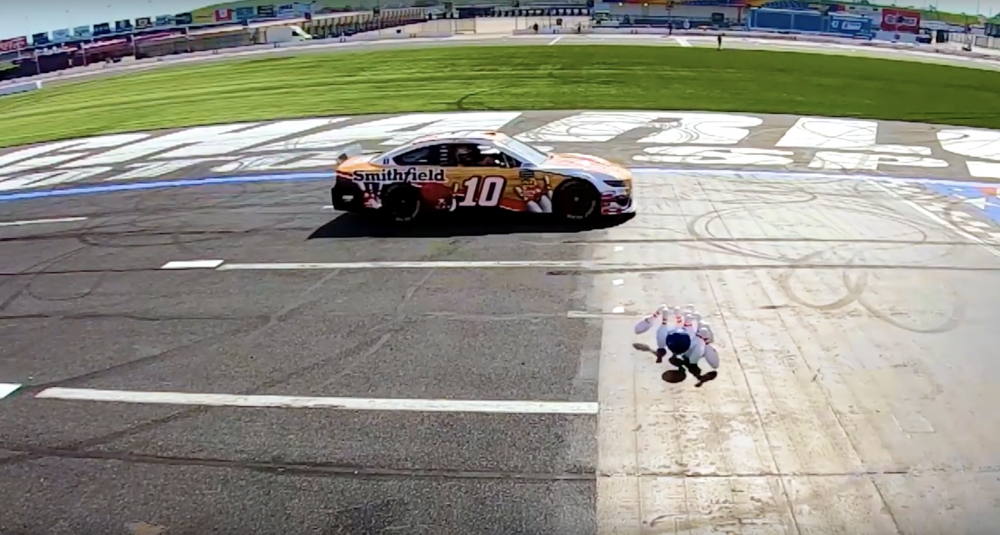 Bowling is a sport that is easy to learn, but tough to master. Almost everybody who has bowled, whether for fun or in a league, has thrown a strike. but not too many people have the skill to regularly throw strikes like those on the PBA Tour.

Sometimes, pro bowlers do trick shots to throw strikes, but this is next level. Jason Belmonte, the #1 bowler in the world, teamed up with NASCAR‚Äôs Aric Almirola to try and conduct a rather unusual and awesome trick shot. With Almirola in the driver‚Äôs seat and Belmonte riding shotgun, Belmonte threw a bowling ball out the window of Almirola‚Äôs #10 Ford and threw a strike while traveling over 140 mph.

THE WORLD‚ÄôS FASTEST STRIKE AT 140+ MPH!

I have two observations after seeing them bowl a strike at 140 mph. One, I‚Äôm surprised that the pins didn‚Äôt blow up or vaporize after they were hit. And two, it would‚Äôve been easier for Almirola to just drive into the pins with his car, but I guess that‚Äôs not as difficult or fun.

Accomplishing something like this is harder than it looks. For one thing, the track isn‚Äôt a bowling alley so the surface isn‚Äôt going to be smooth. And because of that, the ball is going to move around in ways you aren‚Äôt expecting. Another is that Almirola has to go fast, but he also needs to keep his car as straight as possible so Belmonte can do his best to aim for the pins.

It took five attempts, but as a skilled bowler, Belmonte adjusted his throws based on his previous attempts. On the fifth, he threw a perfect strike. I‚Äôm not sure what these two might have lined up for an encore, but the bar has been raised in the bowling trick shot world.