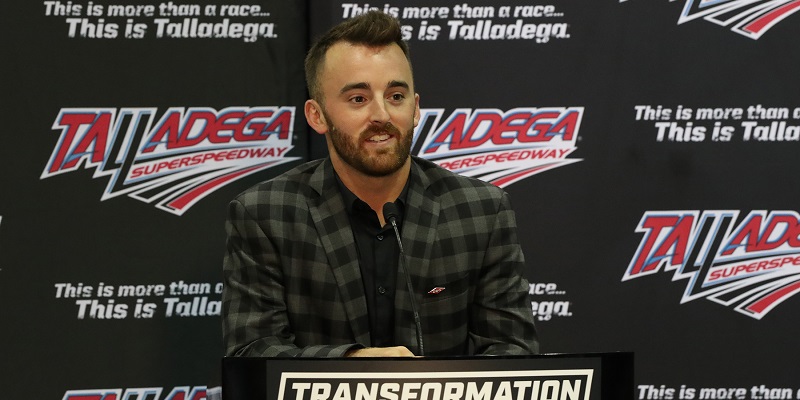 TALLADEGA ‚Äî Now that the racing is underway at Talladega Superspeedway‚Äôs revamped facilities, reactions are trickling in from drivers and fans as they are settling into the new digs.

Austin Dillon, the driver of Richard Childress Racing‚Äôs storied #3 Chevrolet, offered a complimentary assessment of the facility during an interview with Yellowhammer News on Saturday.

‚ÄúThe new garage looks excellent,‚Äù he said. ‚ÄúEverything they drew up in the pictures when they were announcing they were going to do this, it looks identical. It‚Äôs great for our fans. It‚Äôs a great place to come.‚Äù

‚ÄúI‚Äôm a huge sports fan in general,‚Äù he continued. ‚ÄúWhen we update our facilities to compete with these other sports, I think it means a lot, and it goes a long way with our fans.‚Äù

Dillon said that with the new features, he is able to get a few more autographs in with fans and have conversations.

Restrictor plate racing has also changed this season, of which Dillon spoke approvingly.

‚ÄúThere‚Äôs a little more horsepower out there, but the downforce level is pretty high,‚Äù he said. ‚ÄúIt‚Äôs just a little more driving it throughout the race, which is nice. The car seems to handle pretty good. We put on a good show. I like the way the manufacturers are working together now and have kind of created a different type of racing. You see the manufacturer-driven, working together. It‚Äôs cool.‚Äù

Dillon currently sits 23rd in NASCAR Monster Energy NASCAR points outside of the playoffs. However, he is hoping to have late-season success to build on for 2020.

‚ÄúWe want to build some momentum going into next year,‚Äù Dillon said. ‚ÄúObviously we didn‚Äôt finish where we wanted to be here this year, this season, not making the playoffs. But we showed speed at certain times. We need to get back on track with some consistency throughout the end of the year, just being consistent, finishing where we should finish ‚Äì a couple of top 10s for sure is where we‚Äôd like to be, and maybe steal a win by the end of the year.‚Äù

According to the veteran racecar driver, Talladega remains a unique facility, given its tradition and folklore.

‚ÄúTalladega is a fun place,‚Äù he said. ‚ÄúWe were just talking about Talladega Boulevard, the legends and the myths that come around this place. It‚Äôs a fun track to come to. It‚Äôs more relaxed for us drivers. But when you get on the track, it‚Äôs probably the most intense weekend for us. So, we enjoy coming here because you never know what would unfold and what it would look like in the end. That could put some of the most memorable moments in NASCAR history here.‚Äù

Partnered with Dillon‚Äôs effort this weekend at Talladega is General Motors Co.‚Äôs ‚ÄúBuyPower Card.‚Äù Dillon touted it as a useful product for NASCAR fans.

‚ÄúIt‚Äôs really cool,‚Äù Dillon said. ‚ÄúI‚Äôm a car enthusiast, a car guy. The GM BuyPower Card ‚Äì you can put it toward different extras on your car, SiriusXM, oil change ‚Äì whatever it may be you want to do, buy a new car. You can do that with the new GM BuyPower Card. I‚Äôm pumped to be a part of this partnership and feel like it is a good partnership, given I‚Äôll be on the racetrack this weekend. Any fan that comes to the track has to stop and get gas, do different things getting here. I think it is the card for our fans in NASCAR.‚Äù

‚ÄúEverything started here,‚Äù he said. ‚ÄúSo when we come here at RCR, the boss man wants to run good. He loves this place, loves seeing speed, showcase our engines ‚Äì everything. This has been a memorable place for him, and we‚Äôd love to put him back in victory lane here.‚Äù

« Matt Crafton likely to fill in for Paul Menard in relief role at Talladega – NASCAR Fassler to sub for injured Milner again at Lime Rock – Motorsport.com »