In just a few short days they‚Äôll be opponents on the track, but first, two NASCAR stars teamed up to take on the First Order and have some Star Wars-style fun.

LAKE BUENA VISTA, Fla. – In just a few short days they‚Äôll be opponents on the track, but first, two¬†NASCAR stars teamed¬†up to take on the First Order and have some Star Wars-style fun.

Blaney is a life-long Star Wars fan, even sporting a Star Wars tattoo on his right thigh.

He said he‚Äôs been waiting to finally see that new park in person.

“Saw Phantom Menace¬†when it came out when I was about 7 years old and been hooked ever since,‚ÄĚ Blaney said. “Like a kid in a candy store right now. Just wanting to see everything.” 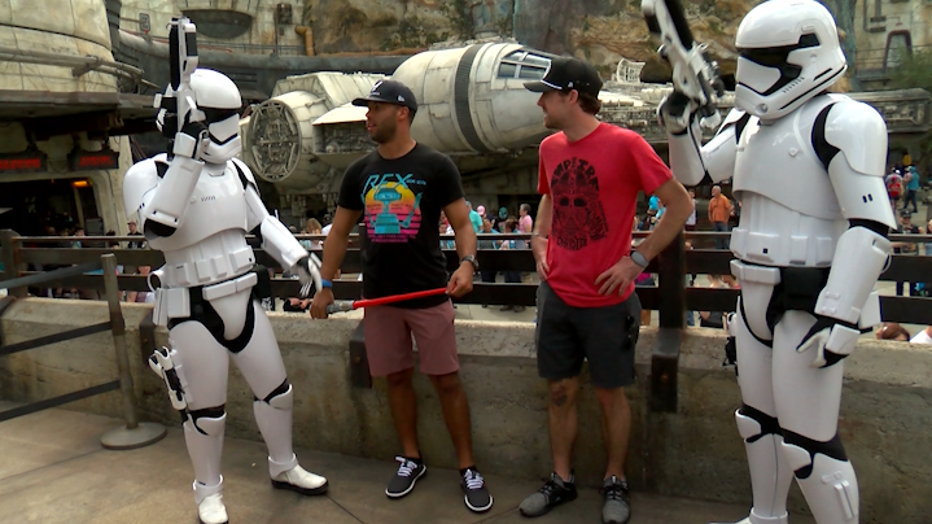 Wallace admits he‚Äôs never been a Star Wars fanatic, but was clearly enjoying the details of the new park as the duo rode both the attractions in Galaxy’s Edge, Millennium Falcon: Smugglers Run and Star Wars: Rise of the Resistance.

‚ÄúThat was cool,‚ÄĚ said Wallace getting off of Smuggler‚Äôs Run. “I didn’t do too great. The first time I was a pilot by myself and they told me to hit the brakes, but I didn’t have any breaks so I ran into the, whatever it was.”

The duo will both compete Sunday at the Daytona 500 and said they are both¬†eager to get to the track.