NASCAR haulers to parade through Brooklyn on Thursday – MLive.com

But a view of the 40-ton haulers that transport the racecars and equipment every week is free.

Fans can get a glimpse of the 38 haulers as they parade through the village of Brooklyn at 4:15 p.m. Thursday, Aug. 8.

The parade starts at the U.S. 12 entrance to MIS, goes north on Brooklyn Road, merges to M-50 through downtown Brooklyn, goes west on Marshall Street, south on King Street, southeast on Constitution Avenue, south on M-50, west on U.S. 12 and back into MIS. See the map below, for details.

Fans are invited to sit along the parade route to watch, as streets will not close for the event. During last yearâs parade, it took about 7 minutes for the haulers to move through downtown.

Action on the track begins Friday, with practice for the Cup Series and Truck Series. Qualifying for Sunday’s Consumers Energy 400 is at 5:05 p.m.

The Corrigan Oil 200 Truck Series race is at 1 p.m. Saturday and the Consumers Energy 400 is at 3 p.m. Sunday. For a full list of events on and off the track â including cornhole tournaments, concerts, go-karts, trampoline shows, driver appearances and more â visit MISpeedway.com. 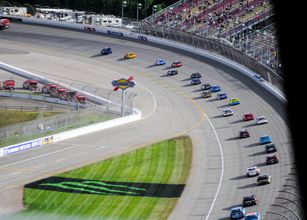 The traction compound should allow cars to race in the high groove of the track.