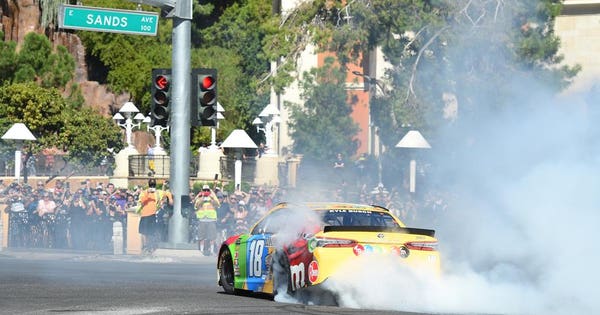 Kyle Busch (18) does a burnout during the NASCAR Burnout Boulevard event on The Las Vegas Strip on September 13, 2018.

NASCAR announced this week that ‚ÄúBurnout Boulevard (Driven by Goodyear)‚ÄĚ will return Sept. 12 at 7 p.m. ET on the Las Vegas Strip. The NBC Sports Network will carry the show, which includes the 16 drivers in the Cup playoffs doing their best burnouts.

If only this would end the ‚Äútradition‚ÄĚ of post-victory burnouts, but it probably won‚Äôt.¬†

The time has come — actually, it is long overdue — for a winner of a NASCAR Cup race to skip that post-race burnout and donut routine. It wastes equipment and pollutes the skies. Drivers do it now more or less because they feel like they have to. What fun is that?

There is nothing wrong with a driver doing a victory lap, climbing on the top of the door of his car to shake a jubilant fist at the hundreds of fans who have not headed to the exits, then maybe even giving a lift to his crew members to victory lane. Kurt Busch did that in the last race (plus a burnout).

But the burnout/donut thing has dried up. It has been around stock cars in earnest for only about 20 of NASCAR‚Äôs 70 years, so it is not like the winner of the Indy 500 declining to drink milk. (Although Emerson Fittipaldi drank orange juice once.)

The winner used to get a kiss on the cheek from a pretty woman (or two) in the old days, but that has disappeared, and no one seems to mind. With Monster Energy in its final year as the Cup title sponsor, it would be fine if those ‚ÄúMonster Girls‚ÄĚ in the skin-tight “workout suits” were dropped from victory celebrations. They just get in the way.

But the routine of a burnout (defined as burning tire rubber while artfully letting out the clutch) preceded or followed by a donut (deftly spinning in circles while doing a burnout and definitely not spelled doughnut, the proper way) has become silly.

The routine became popular in racing in 1997, when an outgoing Indy-car driver from Italy named Alex Zanardi did some donuts after winning a Championship Auto Racing Teams race in Long Beach, Calif. Zanardi had won six races the year before, but started the 1997 slowly.

Although CART officials were not happy, the fans loved the donuts, and they wanted more from Zanardi, whom they quickly called ‚ÄúMr. Donut‚ÄĚ and ‚ÄúThe Donut King.‚ÄĚ CART told him to knock it off, and Zanardi did after two victories, then resumed. He won the title in 1998.

Kurt Busch does a burnout after winning the Quaker State 400 presented by Walmart at Kentucky Speedway on July 13, 2019.

A driver in NASCAR‚Äôs Truck Series, Ron Hornaday Jr., had done donuts after winning races in 1995, but the owner of his truck, Dale Earnhardt Sr., did not like it because Hornaday was beating up the transmission. So it failed to catch on until . . .¬†

. . . Earnhardt won his first Daytona 500 in 1998, on his 20th try. Earnhardt cleverly did two loops to burn his car number, 3, into the Daytona infield, and the routine clicked. Jimmie Johnson did a lot of damage to his car after a burnout/donut after his first Cup victory in 2002.

Some drivers, like defending Cup champion Joey Logano, enjoy doing bodacious burnout/donuts in which their cars all but disappear into a cloud of thick gray tire smoke before emerging. But take a look at the stands lately. Fans have more desire to burn out of parking lots.

Earlier this month, there was no burnout/donut after the most improbable Cup victory in several years. Justin Haley won a race at Daytona because his crew chief had decided that Haley should not pit before a big rainstorm, leaving him in the lead when the race was called.

If anyone earned a burnout, it was Haley, a 20-year-old with an apparent bright future in racing. But it was pouring when Haley was declared the winner, and all he got to do was to stand next to the trophy in a garage and pose for photos while declaring himself No. 1.

But the burnout/donut deal, which started as a way for a driver to display his joy after a tough race, has lost its spontaneity. There is nothing quite like it in other sports — except the Gatorade dump on winning football coaches, but that is pretty worn out, too.

Dale Earnhardt‚Äôs first burnout/donut was cool because it was symbolic and unique. Now it just looks like showing off. No one gets a bigger trophy or more money for doing a good one, and they all look pretty much the same to non-burnout experts. They take up time.

The late Alan Kulwicki had a fun post-victory celebration in the early 1990s with his ‚ÄúPolish Victory Lap,‚ÄĚ in which he took a lap around the track near the stands in the wrong direction. The name of it might not fly today, but it was something cute and fun.

Now NASCAR needs something else. Maybe the next generation of drivers could start a new tradition, or traditions. Bubba Wallace was so happy after a stage victory in a qualifying heat before the All-Star Race that he showered himself elaborately with two bottles of Coke.

NASCAR has a lot of traditions, but the product has become tired, so it is time for some new ideas to punctuate a victory. With all that tire smoke cleared, the skies are the limit.