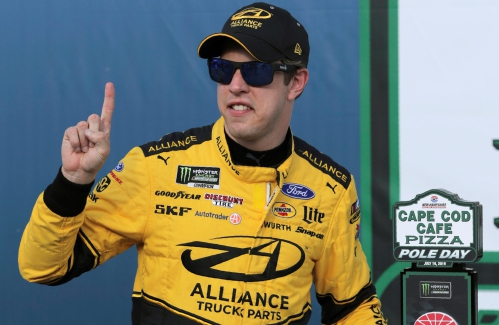 LOUDON ‚Äď There are certain race tracks where starting in pole position matters a whole lot more than others. Count New Hampshire Motor Speedway near the top of that list.

Reaching top speeds of 136.384 mph, Brad Keselowski took the pole ‚Äď his first of the season ‚Äď for the Foxwoods Resort Casino 301 following qualifying Friday for NASCAR‚Äôs Monster Energy Series in Loudon. It was Keselowski‚Äôs fourth career pole at NHMS, his 15th overall and an important one for the standings heading into Sunday‚Äôs main event.

‚ÄúThe only other track I can think of where (qualifying well) is maybe more important is Martinsville in the fall,‚ÄĚ said Keselowksi, who will be joined by Kyle Busch in Row 1. ‚ÄúWe‚Äôre happy with that effort. It certainly bodes well for our shot to get those stage wins, and of course, the overall race win come Sunday.

‚ÄúYou‚Äôre happy for it. You take a breath. You celebrate it and you get your head back down and go to work,‚ÄĚ Keselowski said.

After a blistering lap of 27.942 seconds, Busch held the top spot for less than a minute before Keselowski hit the track and produced the fastest lap of the afternoon at 27.927 seconds.

Due to constant changes at the track ‚Äď application of PJ1 (substance used for traction), regulations on car bodies, riding heights ‚Äď Keselowski said there is no single strategy to employ when drivers make their way to New Hampshire.

‚ÄúEvery time they make those changes, it affects the way the car drives and how you maximize the lap time on it,‚ÄĚ Keselowski said. ‚ÄúIt‚Äôs part of the challenge of being in the Cup series. … I don‚Äôt think there‚Äôs one trick that‚Äôs served us through the years.‚ÄĚ

Kurt Busch and Erik Jones will line up on Row 2, while Ryan Blaney and Martin Truex Jr. will take Row 3. Two New England drivers making their Cup series debuts ‚Äď Andy Seuss and Austin Theriault ‚Äď are both slated to start on Row 18.

Alex Bowman will be in a backup car on Sunday. The drive shaft in Bowman‚Äôs No. 88 Hendrick Motorsports Chevy exploded as he drove full-throttle down the front stretch during his qualifying lap, leaving a trail of smoke behind and oil on the track.

‚ÄúIt‚Äôs a bummer, but stuff happens, parts fail,‚ÄĚ he said.

Bowman will start in last place and have the last pit stall.

Bowman wasn‚Äôt the only driver to unload his backup car Friday.

Denny Hamlin and Ryan Newman will join him in the back of the field to start Sunday‚Äôs Foxwoods 301. Both drivers went to their backup cars after wrecking in separate incidents in the closing minutes of the first practice session Friday morning.

Hamlin lost control between Turns 3 and 4 with just four minutes left in the 50-minute session, sending No. 11 Joe Gibbs Racing Camry backwards into the outside wall. Newman, a few minutes later, hit the outside wall entering Turn 3. Both teams unloaded their backup cars and ran qualifying laps.

Hamlin won here in a backup car in July 2017. He crashed during Friday practice leading up to that race, as well. But that was then, and it doesn‚Äôt make Hamlin feel any better about the situation this weekend.

‚ÄúIt‚Äôs not as good as the primary ‚Äď it‚Äôs a backup for a reason and it‚Äôs been in the trailer for a long time,‚ÄĚ he said after qualifying. ‚ÄúThe backup car back (in 2017) was a little bit more updated than what this one is.‚ÄĚ

Chase Elliott led the field in the first practice session of the weekend, spinning a lap at 137 mph. Kyle Busch and Matt DiBenedetto each turned in laps at 136.87 mph for second. … Daniel Hemric, who will start 19th, was the fastest qualifying rookie with a lap of 28.307 seconds. … Chase Cabre won the pole for Saturday‚Äôs K&N Pro Series East race; Max McLaughlin and Sam Mayer will start second and third, respectively . … In the last tuneup for Xfinity Series drivers, Justin Haley produced the fastest lap at 128.511 mph during the final practice run for the 30th Annual Roxor 200.

« Hamlin, Newman to start at rear after New Hampshire crashes in practice – NASCAR How NASCAR Plans To Race From The Heat – Forbes »