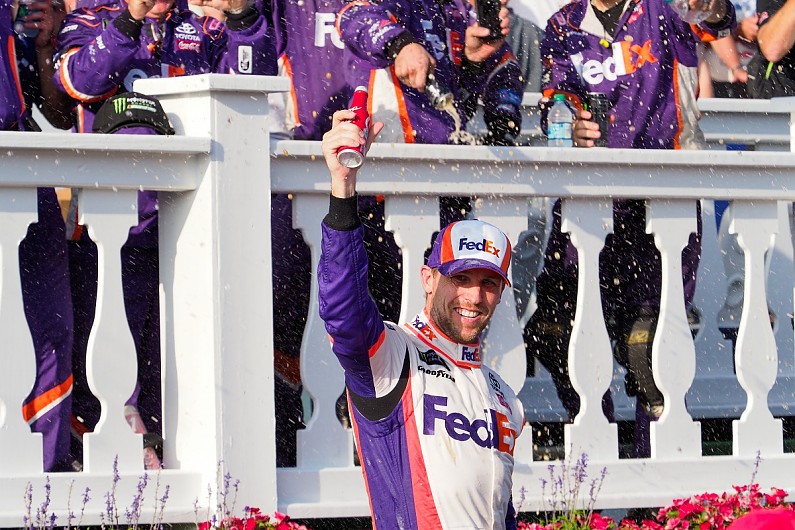 Denny Hamlin prevailed despite fuel worries in a tense overtime period to lead home a Joe Gibbs Racing 1-2-3 in the NASCAR Cup race at Pocono.

Hamlin and his team-mates Erik Jones and Martin Truex Jr were leading the race with a handful of laps of the scheduled 160 to run, while deploying the lift and coast technique in their Camry machines to keep going on their slender reserves of fuel, when a caution was issued due to the stricken car of Josh Bilicki.

Once the race resumed in overtime, Hamlin fended off Jones and Truex to claim his third victory of the 2019 campaign, with Jones just pipping Truex to secure the runner-up spot.

With a fuel-window of around 40 laps, the JGR fleet’s final fuel stops came early in the final 60-lap third stage, when a caution for Ryan Preece hitting the wall prompted a round of pitstops.

Kyle Busch was running off-strategy and cycled to the lead at this point, but he fell away after pitting on lap 133 for his final stop, which allowed the JGR trio to break-away from the pack, with Hamlin lurking behind Jones and Truex and making the ultimately decisive move for the lead on lap 145.

Larson, who had started at the back of the field after requiring the use of a back-up car following a practice crash, stormed through the field early in the race, rising to 11th from 28th after 20 laps.

The 2019 NASCAR All-Star race winner was then a fixture inside the top 10 for the majority of the race, coming home ahead of polesitter Kevin Harvick.

Harvick had seemed best placed to take the challenge to the JGR contingent after a pitstop meant he did not have the fuel worries affecting his rivals late-on, but a poor overtime restart left the Stewart-Haas driver in sixth, although he was the highest placed Mustang finisher.

Daniel Hemric was seventh for Richard Childress Racing ahead of Brad Keselowski, who recovered from striking a wall on lap five to take a solid finish in eighth for the Team Penske.

Busch, who had won three of the previous four races at Pocono, lead 56 laps, second only to Harvick’s 62, looked strong, but his off-strategy gamble was torpedoed by the Preece caution, although he did win the 50-lap first stage.

He cycled into the lead but required an extra stop, which he took on lap 134, and ended up ninth, with Ryan Blaney rounding out the top 10.

Seven-time Cup champion Jimmie Johnson secured just his second career stage win when he inherited the lead of the 50-lap second stage as Busch pitted late on, but he fell away to 15th by the finish.