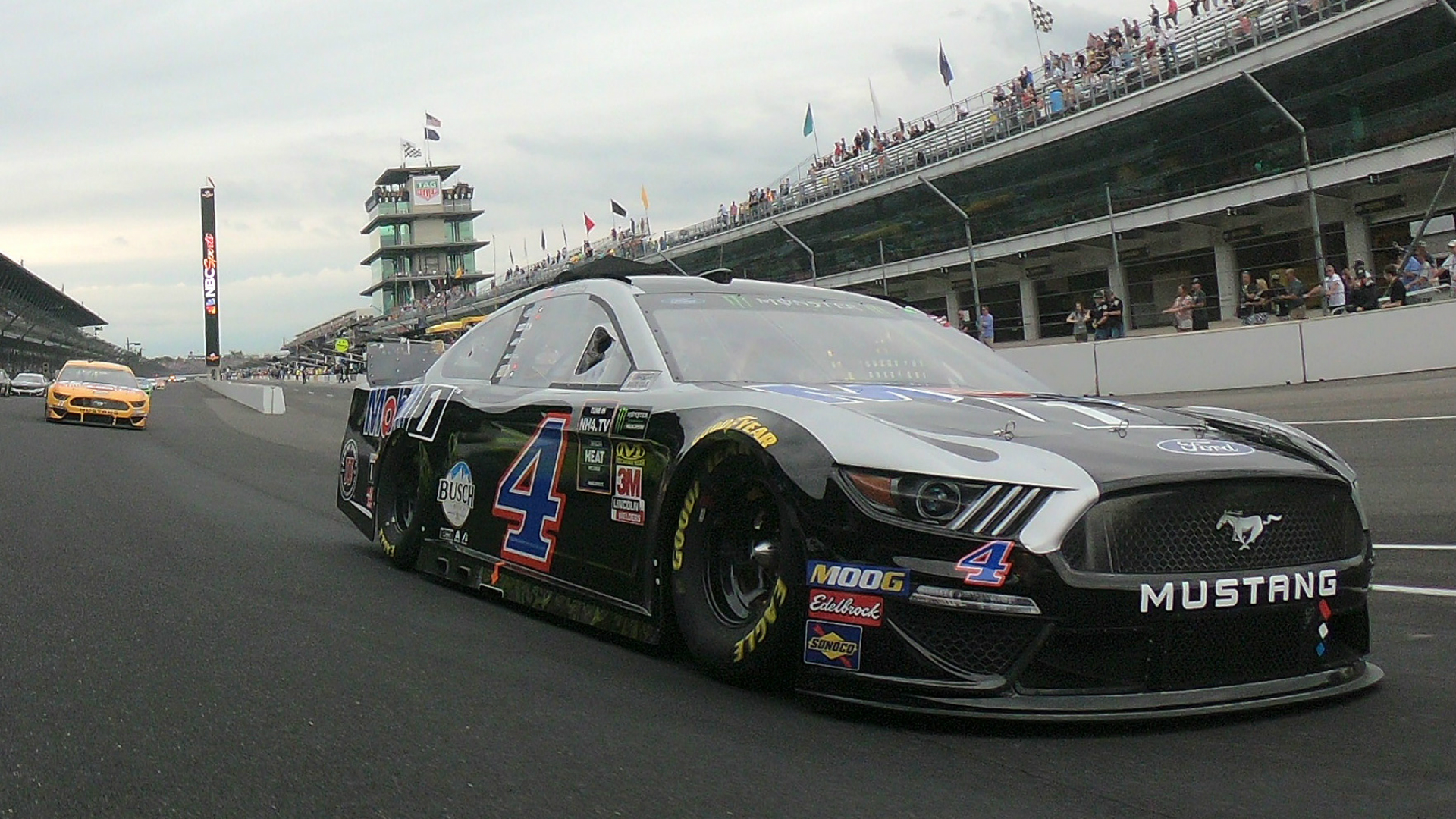 Harvick led 119 of the 160 laps at Indianapolis Motor Speedway and was rarely threatened. The one exception was a moment when he deviated from his strategy on one of the race’s nine restarts. He had been electing to start on the outside but chose to start on the inside with fewer than 50 laps to go and was passed by Ryan Blaney.

He restored order shortly after, though, and returned to the outside for subsequent restarts, winning by just over six seconds over second-place finisher Joey Logano, and eight seconds faster than third-place Bubba Wallace.¬†

There was plenty of drama farther back in the field, though. Newman and Suarez entered the rae tied for 16th in the point standings, with Johnson behind them in 18th. Johnson wrecked after 105 laps ‚ÄĒ¬†meaning he will miss the playoffs for the first time in his career ‚ÄĒ¬†and Suarez seemed in good position to take the final spot despite having brushed the wall on the first lap of the race.¬†

With about 30 to go, however, Suarez pitted under green and lost a lap just before a caution, giving a huge advantage to Newman, who had been racing in the top 10 for much of Sunday. Suarez got back on the lead lap via the free pass, but he never caught up to Newman, finishing four spots, and four points, behind.

Bowyer entered the race¬†15th in the standings, with enough of a point cushion above Suarez and Newman that he could have¬†finished below them, but finished fifth for good measure, one spot behind William Byron.¬†¬†

Sporting News tracked¬†live results, upates and highlights from the 2019 Big Machine Vodka 400 at the Brickyard as it happened. Follow along in real time below.¬†

5:27 p.m.: CAUTION. Matt Tifft goes into the wall. Ninth caution of the day. Thirteen laps to go. Suarez tried to go inside Tifft and sent him into the wall instead, though there was very little (if any) contact. Suarez is in 16th. Newman is in seventh. Harvick still leads.¬†

5:11 p.m.: CAUTION. Another failed restart as Bowman takes some contact and spins out. He narrowly avoids the wall and Bowyer but eventually hits a tire barrier¬†on the inside. We’re under 25 laps to go.¬†

5:00 p.m.: CAUTION . Kyle Larson crashes. Shortly before, Suarez had to pit prematurely and lost a lap, but he’ll get the free pass back onto the lead lap. He’s currently outside the playoff picture and will have to catch Newman, who’s running in 12th, a spot ahead of Bowyer. 30 laps to go.¬†

4:44 p.m.: The current playoff picture has Suarez and Bowyer¬†in, while Newman is on the outside. Suarez is is currently racing in fourth and Newman is in sixth, ahead of Bowyer in 10th, but Bowyer’s point cushion entering the race has him safe for the time being.¬†

4:42 p.m.: CAUTION. Just as the¬†restart comes, Kyle Larson makes contact with Harvick and heads to the pit. No apparent issue for Harvick.¬†

4:18 p.m.: Stage 2 ends under caution. That’s a boon for¬†Bowyer and Suarez, who were in fifth and sixth, respectively, and gain points to maintain their lead over Johnson.¬†

4:14 p.m.: CAUTION. Debris brings out a yellow. Johnson moved up to eighth for the restart. Suarez is in sixth. Just a couple of laps left in stage 2.¬†

3:59 p.m.: CAUTION. A huge break for Johnson, whose pit strategy gets him into first just as Kyle Busch’s engine fails and brings a caution out.¬†

2:53 p.m.: Joey Logano and Ryan Newman elect not to pit at the caution, aiming for some stage 1 points. Johnson only takes two tires and he’s the first off pit road, also going for stage 1 points. Six laps left in the first stage.¬†

2:50 p.m.: CAUTION. ¬†Landon Cassill’s car refuses to turn,¬†and he smashes straight into into the wall at nearly full speed. He appears unhurt, but we’ll go under yellow.¬†

2:33 p.m.: Johnson needed a second pit stop during the caution¬†due to a bad left tire, so he restarted at 27th. He’s up to 16th already but still has work to do. Ryan Newman, meanwhile, is in 13th and is off to the best start of the playoff contenders.¬†

2:28 p.m.: Off the restart, Harvick and Keselowski battle for the lead for a couple of turns, and Harvick keeps his lead with a pass on the outside.¬†¬†

2:25 p.m.: There’s some drama on pit lane, as there’s some contact and Chase Elliott spins out. Takes a bit to get all that sorted out.¬†

2:22 p.m.: The entire lead lap heads to the pit, with the race remaining under caution.¬†

2:17 p.m.: CAUTION. Daniel Suarez bumps up against the wall, and the cockpit fills with smoke. The damage doesn’t look too bad, though, and he returns to the track. We’re 12 laps in.

2:10 p.m.: ¬†Kevin Harvick quickly opens up a lead of more than a second after the green flag start. Jimmie Johnson drops a spot from his¬†fifth to sixth.¬†