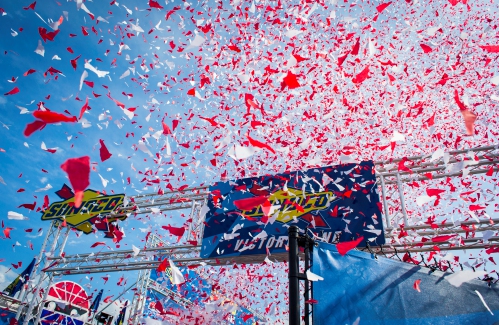 Kevin Harvick showed a wide smile as he gripped the claws of a 20-pound lobster and posed for photos in Victory Lane at New Hampshire Motor Speedway last summer.

In the midst of what would become his most dominant regular season yet in the Monster Energy NASCAR Cup Series, Harvick captured the win after nudging Kyle Busch up the track, out of the groove, and into second place with seven laps to go.

The duel defined last July‚Äôs Foxwoods 301 and was a thrill for the fans who waited out a rain delay to see the race. Harvick, Busch and Martin Truex Jr. were the cream of the Cup series heading into that weekend with a combined 14 wins out of 20 races.

But that was last year, and there are new storylines to follow as NASCAR returns to Loudon for this Sunday‚Äôs Foxwoods 301 (3 p.m., NBCSN) with seven races left before the playoff field is set.

Joey Logano, a Connecticut native who calls New Hampshire his home track, won his first championship in the Cup series last season, outrunning Truex, Harvick and Busch for the win and the title at Homestead-Miami Speedway in November.

Logano has followed it up with a strong first half this season, snagging a pair of race wins at Las Vegas and Michigan and leading the standings in points.

Logano is a two-time winner on the mile track at Loudon, including his first ever Cup win during his first full-time season in the series as a 19-year-old in 2009. He returned to Victory Lane in September 2014, when New Hampshire still hosted two annual NASCAR weekends. Logano has four top-five finishes in the seven races here since. He placed ninth in Loudon last summer.

Logano currently leads the standings with 746 points. Busch is second, just 11 points behind Logano, and shares the season lead in wins (four) with Truex.

Harvick, meanwhile, is chasing his first win of the season ‚Äď as are the other four drivers under the Stewart-Haas Racing banner ‚Äď but has accumulated enough points for third in the standings.

Brad Keselowski (three wins) and Denny Hamlin (two) round out the top five. Truex sits in a tie for sixth in the standings with Kurt Busch, the former SHR driver who steered the No. 1 Chip Ganassi Racing Chevy to Victory Lane at Kentucky last weekend. He edged his younger brother, Kyle Busch, for the win in a dramatic last-lap sprint.

Fans should keep an eye out for Andy Seuss (No. 51 Rick Ware Racing Ford) and Austin Theriault (No. 52 Petty-Ware Racing Chevy). The two New England natives will make their debuts in the Cup series on Sunday. Seuss is from Hampstead and Theriault is from Fort Kent, Maine. Seuss will also run in the Modified Series this weekend.

While there may not be a clear ‚ÄúBig Three‚ÄĚ in the Cup series this season, there certainly is in the Xfinity Series with the ROXOR 200 (4 p.m., NBCSN) firing off Saturday in Loudon.

Tyler Reddick, Christopher Bell and Cole Custer hold the top three spots with just 75 points separating them. They‚Äôve combined to win 12 of the series‚Äô 17 races so far this season.

Custer has grabbed the most attention this season despite sitting in third. The No. 00 Stewart-Haas Ford Mustang team leads the series in wins with five, including last weekend in Kentucky. He‚Äôs also a six-time pole winner this season. He‚Äôs chasing his first win at Loudon in the Xfinity Series after taking ninth in his last two visits here in 2017 and 2018.

Bell parked his No. 20 Joe Gibbs Racing Toyota in Victory Lane after this race last summer. He‚Äôs the only previous winner at Loudon entered in this weekend‚Äôs race, according to NASCAR.

Reddick is the defending champion in the Xfinity Series and was named the series‚Äô Rookie of the Year in 2018 as well.

Paul Menard is the only full-time Cup driver entered to run in this race.

The Cup and Xfinity series may feature the biggest names in racing, but the Modified Series has historically offered some of the most exciting moments on the track.

These cars look and drive very differently from the cars fans are used to seeing when they tune into NASCAR races. These cars are stockier, sitting about 11 inches shorter than the Cup cars and nearly 2 feet wider with open wheels in the front.

The Modifieds will kick off the races this weekend with the annual All-Star Shootout on Friday at 2:10 p.m., followed by Cup qualifying at 4:35 p.m. The shootout is a non-points, 35-lap race. The drivers will race for points on Saturday in the Eastern Propane & Oil 100 beginning at 2 p.m.

Massachusetts native Bobby Santos III is always a force on this track ‚Äď he‚Äôs won three of the last four races here. He‚Äôs taken a step from the series this season, but he wouldn‚Äôt miss a chance to run at Loudon and will pilot the No. 36 Dodge.

Seuss, the Hampstead native who regularly competes in this series when it comes to Loudon and has 11 career wins on the Whelen Southern Modified Tour, will run both the 100-lap race Saturday and the 301-lap Cup race on Sunday.

So will Ryan Newman, driver of the No. 6 Ford Mustang for Roush Fenway Racing in the Cup series. Newman won the pole for the 100-lapper last year.

Ryan Preece, a Connecticut native in his first full-time Cup season driving the No. 47 Chevy for JTG Daugherty Racing, will also return to his roots and drive the No. 6 car in the Modified Series. Preece won the 2017 All-Star shootout besting Newman on a last-lap battle.

NASCAR‚Äôs northeast development circuit makes its only visit of the year to NHMS this weekend for the United Site Services 70 on Saturday at 6:45 p.m.

Derek Kraus took the pole in last year‚Äôs race, while Tyler Ankrum was the winner on his way to the series championship.

Kraus enters this race as the points leader with two wins so far this season. It‚Äôs the third K&N race at NHMS for the 17-year-old from Wisconsin. He won the pole in each of his previous visits to Loudon and notched a fifth-place and runner-up finish.

Right behind Kraus in the standings is rookie Sam Mayer, a 16-year-old racer also from Wisconsin. Mayer has a win and four top-five finishes this season, putting him atop the running for series Rookie of the Year. He has one top-10 finish out of two previous races on the Loudon mile.

New Hampshire Motor Speedway unveiled its new flat track earlier this year, which sits behind the North East Motor Sports Museum on the southern end of the speedway‚Äôs property along Route 106 in Loudon.

The quarter-mile dirt track will host its first race under the lights on Friday, headlined by the U.S. Legend Cars International and the USAC Dirt Midget Association.

Cup series drivers Cory LaJoie and Daniel Hemric will run in the 35-lap legends race, with fellow Cup driver Ryan Blaney serving as grand marshal. The field will be competing for the largest purse of the season at $2,000.

Practice laps begin at 6 p.m. with heat races set for 7 p.m. Tickets are $10 and can be purchased at NHMS.com. Kids 12 and under are free. The event is mostly standing-room, so the track encourages fans to bring lawn chairs or blankets for seating.

(Nick Stoico can be reached at 369-3321, nstoico@cmonitor.com or on Twitter @NickStoico.)