CONCORD, N.C.¬†‚Äď Clint Bowyer has been around racing for a long time. From the short tracks of Kansas to the high banks of Daytona and the historic Indianapolis Motor Speedway, Bowyer has driven stock cars to victory after victory, including 10 wins in NASCAR top division, the Monster Energy Cup Series.

But on Friday, Bowyer got to witness something up-close and in-person that he had never seen before. It was two-time NTT IndyCar Series champion Josef Newgarden‚Äôs No. 2 Shell/Pennzoil Chevrolet Indy car take laps around the 17-turn, 2.288-mile ‚ÄúRoval‚ÄĚ at Charlotte Motor Speedway.

“I’ve been doing this for a long time and I’ve never seen one of these Indy cars¬†in person,‚ÄĚ said Bowyer, who drives for a team owned by 1997 Indy Racing League champion and 1996 Indianapolis 500 Rookie of the Year Tony Stewart. ‚ÄúThe damn thing looks like a space shuttle.

‚ÄúMan, that space shuttle looks stuck to the ground. This is really cool.”

Friday was a day when two worlds converged, and it could potentially be a view into the future.

The Indy Racing League competed at Charlotte Motor Speedway on the 1.5-mile oval from 1997 to 1999.

Is it possible that an NTT IndyCar Series could one day return to compete on the Roval as part of an IndyCar/NASCAR doubleheader? 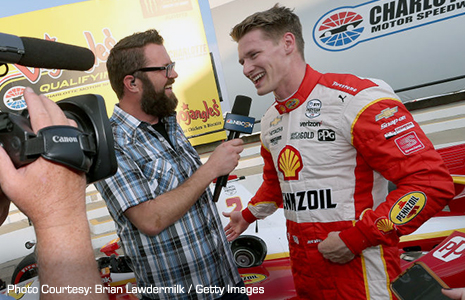 ‚ÄúWould I love a doubleheader weekend? If you are asking me personally ‚Äď absolutely,‚ÄĚ said Newgarden, who clinched his second NTT IndyCar Series championship in three seasons at Team Penske in last Sunday‚Äôs Firestone Grand Prix of Monterey. ‚ÄúI would love that opportunity one day. I think it would be cool for the fans,¬†without a doubt.

‚ÄúWhy would you not want to have that double-double on a weekend? They are both great championships, and I respect these guys so much. I love keeping in touch with what they are doing. So, to be able to be a little closer to them and vice versa for us, I think it would be a win-win for all of us.‚ÄĚ

At a track made famous by stock car racing since 1960, Newgarden was the center of attention Friday evening.

‚ÄúHonestly this was a lot of fun,‚ÄĚ Newgarden said afterwards. ‚ÄúThis was a really cool opportunity that Pennzoil provided for us. It‚Äôs been great to showcase that. They were a big part of these championships. Joey Logano (Cup champion) last year, and me this year. So, to get to drive my Chevrolet Indy Car out here today was kind of a treat for me.

Newgarden has received plenty of gifts and accolades since last Sunday‚Äôs eighth-place finish at WeatherTech Raceway at Laguna Seca concluded. He spent three days in New York, including a trip to Yankee Stadium as the guest of rival NTT IndyCar Series team partner George Michael Steinbrenner, IV. His father, Hank, and Uncle Hal are currently the owners of the most successful professional sports team in the world.

It was back to North Carolina afterwards and time to go back to work Friday at Charlotte Motor Speedway, giving feedback on the Roval, a combination infield road course and high-banked oval race course.

‚ÄúThe track felt pretty good,‚ÄĚ said after his run. ‚ÄúI was really interested in that. We are a different series, and we have a different tire make.

‚ÄúNormally, on a single weekend where you have different series running together, you have to clean the track up every time your series goes out, so I was kind of cleaning the track myself and it was getting better each lap.

‚ÄúBut what I love is the NASCAR guys are interested in us and we are interested in them. You can tell we are all just racers. I love their cars, and they love ours. The only thing that would have made me more excited is if I could have gotten into one of their cars today.‚ÄĚ

One of those was his team Penske NASCAR teammate, Logano, who won the Cup title last season for Team Penske.

The two drivers have been able to compare each other‚Äôs championship celebrations.

‚ÄúThe whole championship tour was fun,‚ÄĚ Logano said of his 2018 title. ‚ÄúIt is really something incredible. Just a lot of really cool things you get to do that you don‚Äôt think about. Whether it is visiting the White House‚Ä¶to me, one of the best things was just sitting in the room during the Hall of Fame voting and seeing that process. That is probably the coolest thing to me and stands out the most. There are a lot of unique things that come along, and a lot of things I didn‚Äôt know was part of winning a championship.

‚ÄúJosef has already been through this once, so I‚Äôm sure he probably knows what‚Äôs coming at me from the IndyCar side. There are a lot of very special things. When you win the championship and you cross the finish line, all you think about is oh my gosh we just won the biggest thing we could ever win, but the perks that come along with it are sometimes four or five months down the road before you see some of the interesting things you get to do.‚ÄĚ

Newgarden has had a chance to do a lot of cool things since winning the championship last season, including his ride around the Roval Friday night.

But there remains one more celebration in store for the 28-year-old driver from Hendersonville, Tennessee.

‚ÄúFor me I thought I would go a different route and do something a little bit off the cuff,‚ÄĚ Newgarden said. ‚ÄúI‚Äôm going to get married this off-season. That is my reward I guess is that I get to get married. Ashley (Welch, his longtime girlfriend and fianc√©e) is so happy we won the championship. I‚Äôm going to be a lot happier, that is for sure. You go into the off season when you didn‚Äôt win the championship, it is normally pretty tough, especially when you had a shot. I have a busy schedule for sure.

‚ÄúGetting married is number one on my list for sure next month. Then we will take it one day at a time.