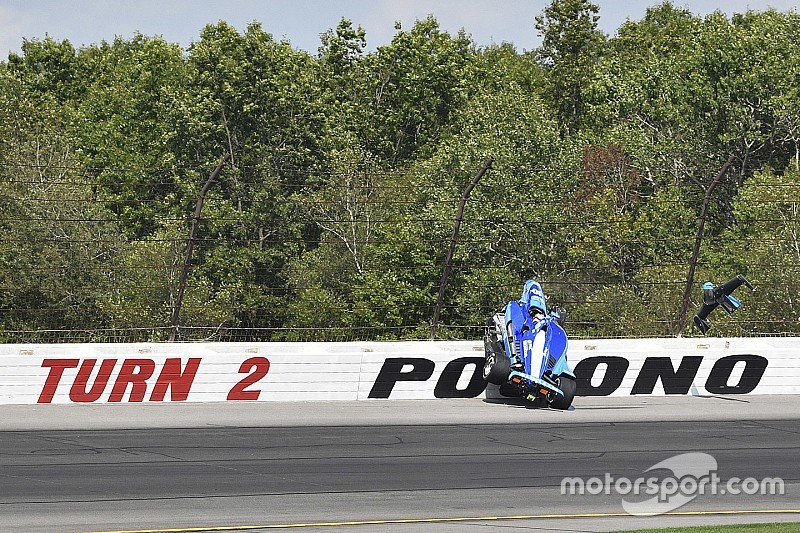 Rosenqvist was the only one of the five drivers involved in the first-lap incident that wasn’t swiftly cleared after his car was launched into the air off Takuma Sato‘s stricken Rahal Letterman Lanigan Racing machine and rode along the catch-fencing at Turn 2.

The rookie was able to walk away from the crash to the ambulance that transported him to a nearby hospital, where medical scans confirmed he had avoided major injury.

On Sunday night, Rosenqvist tweeted: “Just got cleared from the hospital. Definitely feel lucky escaping without any serious injuries after visiting the catch fence there…”

The Swede later said: “I just have some minor back pain and a bit of a headache. Hopefully I will be back to normal in a couple of days.

“A big thank you to the IndyCar track staff and medical personnel;¬†they did an awesome job looking after everything. Luckily the other drivers [Sato, Ryan Hunter-Reay, Alexander Rossi and James Hinchcliffe] are OK as well, which¬†I think is the main thing.

“It‚Äôs a shame that we were caught in the incident on lap one. I think we had a good NTT Data Honda today. I look forward to being back in the car at Gateway.‚ÄĚ

Rosenqvist remains the highest-placed rookie in the IndyCar standings with three races to go, although Dale Coyne Racing’s Santino Ferrucci has closed to within 13 points following his fourth-place finish, his equal-best result of the year.