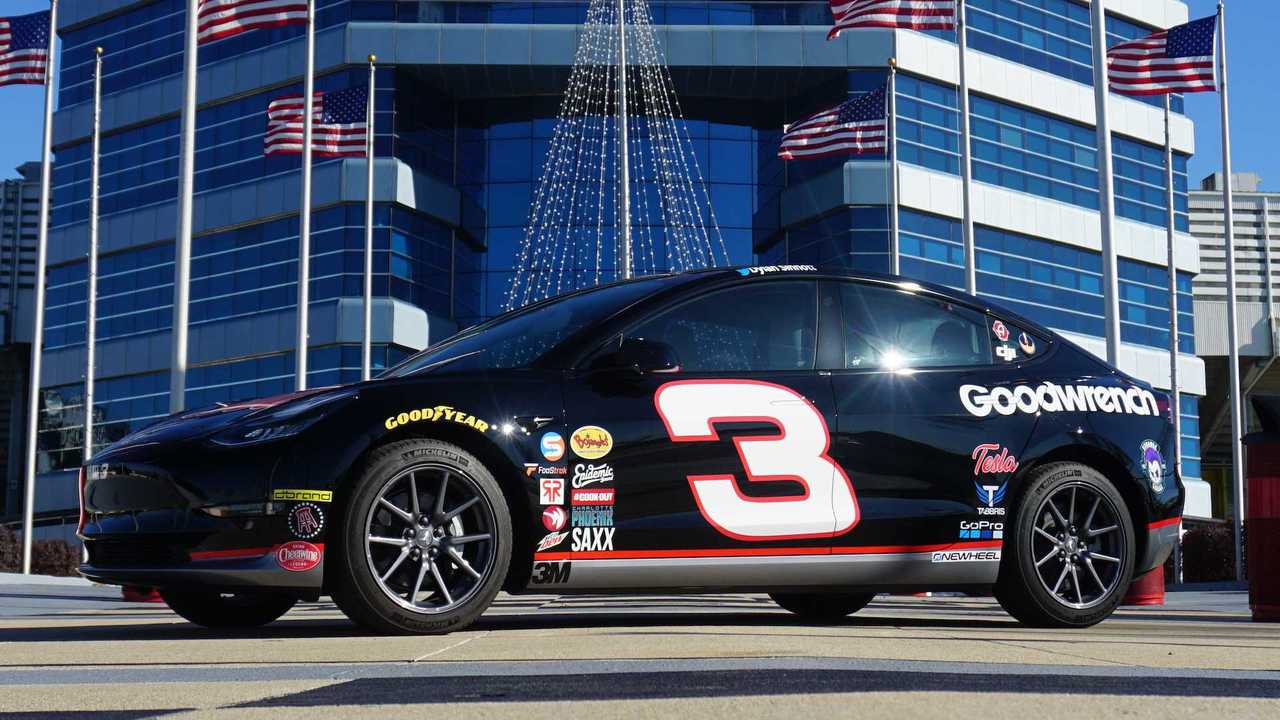 Those stickers are actual sponsors, and they paid for the entire car.

Yes, this Tesla Model 3 is completely decked out in NASCAR livery. Not only that, it wears perhaps the most storied, iconic, and fiercely loved livery of them all. We‚Äôre talking about The Intimidator, Dale Earnhardt, who rocked NASCAR through the 1980s and 1990s driving a range of Chevrolets that were as far removed from a Tesla Model 3 as a beer stand at the public library. When we first saw these images, we so wanted to mercilessly pounce on this creation, not because we‚Äôre Dale devotees per se, but because it‚Äôs just dumb. And yet, here‚Äôs the thing. It‚Äôs not dumb. It‚Äôs actually freaking epic, and yes, for the owner of this ride, it was completely free. More on that in a bit.

We give a shout out to Jalopnik for the full story on this build, and it reminds us of the age-old adage to not judge a book by its cover. The man behind this Dale Sr. tribute car is Dylan Sinnott, a North Carolina resident who grew up smack in the middle of NASCAR country. He‚Äôs an IT professional with an interest in marketing, and to make a long story short, he thought he might be able to get a car for free with enough sponsors. NASCAR lives and breathes thanks to sponsors, and Earnhardt won the hearts of fans driving his black no. 3 Goodwrench stock car. Tesla has a car called the Model 3. It doesn‚Äôt take a genius to see how this all ties together.

Sinnott formulated a plan to campaign sponsors to cover the cost of a decked out Tesla Model 3 Performance. With the numbers crunched, he pitched the idea to cast this Model 3 as a tribute to number 3, and sponsors responded in-kind. All those stickers on you see on this Tesla? They aren‚Äôt just for show ‚Äď they‚Äôre the companies that got behind Sinnott and his idea. And when all was said and done, the sponsorships covered the entire bill for this Tesla. Friends, that‚Äôs as American and NASCAR as you can get without actually having a pit crew.

As for all the Dale fans bursting with anger over this livery appearing on a small, four-door EV, let us remind you that the Chevy Lumina wasn‚Äôt exactly a stellar machine sitting in dealership showrooms back in the day. This Model 3 Performance is also seriously quick, capable of hitting 60 mph in less than three seconds. That would rival Dale‚Äôs actual NASCAR-spec racer, meaning this could be the quickest Earnhardt tribute car of them all. And lest we forget, Tesla is an American company ‚Äď arguably more American than GM at this point. The only things missing are Bow Tie badges and internal-combustion engine sounds.

Sinnott is working on special events to attend with his Tesla, because he has sponsors to keep happy. We think it‚Äôs a small price to pay for getting a free Model 3 with supercar performance, but what do you think of this Tesla-based Earnhardt tribute? ¬†