iRacingŌĆÖs place in the world of NASCAR and motorsports as a whole continues to evolve.

The sim racing outlet is part video game, sponsor, eSports, practice and testing tool, and more recently preservation. Officially launched in 2008, iRacing itself can be traced back to the Papyrus Design GroupŌĆÖs NASCAR Racing Season 2003. Some legacy code can still be seen in iRacing, if one looks hard enough.

iRacing was born out of the demise of Papyrus Design Group. As the consoles took precedent, Electronic Arts became the dominant force in the world of video games for NASCAR. Meanwhile, David Kaemmer, John Henry, and Steve Myers took a different approach.

ŌĆ£Basically, when we started iRacing in 2004, we bought source code, hired all the engineering staff and then we took a year or so to kind of comb through that. We used a lot of it as kind of like the base of where we were going to start to build all the new systems. So, certainly thereŌĆÖs a lot of legacy codes thatŌĆÖs the basis of iRacing. But, at this point 17 years later, significant parts of it has all been rewritten or replaced at this point.ŌĆØ

This new approach that iRacingŌĆÖs founders took was difficult. A new business model, that in the era of consoles such as the PlayStation 2, Nintendo Game Cube, and XBOX, were relatively untested and unproven. That business model, which is still used to this day, is subscription based, includes some one-time ŌĆśmicro-transactions,ŌĆÖ and marketing.

Myers reflected on the difficulty that iRacing first experienced:

ŌĆ£Well, I think in the early days it wasnŌĆÖt particularly easy because when you rewind back to the early 2000s and there was a period in the late ŌĆÖ90s and early 2000s when we took a really different approach because the game industry was broken.┬Ā

ŌĆ£In the sense that, part of the reason why Papyrus went out of business is because EA came in and brought a massive check to NASCAR to get an exclusive license. If you really kind of boil it down and simplify what iRacing is, weŌĆÖre a marketing company.┬Ā

ŌĆ£WeŌĆÖre taking all of these properties and brands and putting them into a central location that now people from all over the world can come and experience that. And I think in the early years a lot of those manufacturers and properties were kind of still thinking that the model as, ŌĆśOh, this is a licensing relationship and we get to make a lot of money from doing this.ŌĆÖŌĆØ

The traditional business model that EA relied on eventually faded away. In their other game franchises, micro-transactions are now commonplace. They also left the world of NASCAR after the 2009 edition of the console game was released.

iRacingŌĆÖs marketing based model came into focus as Myers stated:

ŌĆ£When the reality is that that the game developers are the ones that are taking on all the risks, the costs of creating this content and putting it out on and into digital marketplace or in some products. So, itŌĆÖs very, very expensive. There had to be a change in the model.┬Ā

ŌĆ£So, when we started iRacing we just said, ŌĆśweŌĆÖre a marketing companyŌĆÖ where weŌĆÖre not going to pay you a bunch of money to advertise your product to our customers. ItŌĆÖs more of a collaborative experience. There was a lot of companies I think early on that didnŌĆÖt kind of follow that same perspective.┬Ā

ŌĆ£But now, here we are, fast forward, 16 years later and IŌĆÖm turning people away every week at this point because we can only build so much content in a given year and we have to do selective on making sure that weŌĆÖre building the content that is going to get us the best return, but also potentially kind of work with programs or, ideas that we have to market things.ŌĆØ

Home of the only officially NASCAR sanctioned eSports series, iRacing includes 18 cars and 18 tracks in its base content. Another 94 tracks and 76 cars can be purchased individually. In addition to NASCAR, iRacing has partnerships with IndyCar, Supercars Champion, SCCA, and the Skip Barber Racing School among other series.

Each car and 1.5-Mile track can take about five days to laser scan and photograph. Once that data is entered into iRacingŌĆÖs CAD software, the car or track is meticulously recreated in the virtual world. About four months after the first scan, the track is then released to the public.

One track that is highly anticipated to be joining the service is North Wilkesboro Speedway. After assistance from Dale Earnhardt, Jr., iRacing scanned and photographed the abandoned track. Earnhardt along with Marcus Smith, Myatt Snider, Marty Snider, Myers and others cleaned the track to allow for proper scanning.

Besides the ŌĆścoolness factor,ŌĆÖ Myers thought it was a unique opportunity for all involved:

ŌĆ£I think itŌĆÖs super cool. I mean thatŌĆÖs why we did it, you know? From my perspective there isnŌĆÖt a lot of content track-wise thatŌĆÖs not available to NASCAR fans at this point in our service.┬Ā

ŌĆ£We have every track in the top three tiers of the sport. And, itŌĆÖs interesting even from that perspective that hereŌĆÖs a piece of history of NASCAR that has been rotting away and with some help from Dale Jr, weŌĆÖve gone and collected that data to be able to preserve in digital space. And now people that will have never seen a race on that track will now get to see it. ItŌĆÖs such a unique track, getting a chance to go be there and see it.┬Ā

ŌĆ£IŌĆÖm excited for it because itŌĆÖs so unique and different than anything else we have in the service right now. I think it will be popular, take away the history and the fact that itŌĆÖs kind of this relic that thatŌĆÖs dying, from just a competition aspect, itŌĆÖs going to be fun to drive that track because it will be different than everything else.┬Ā

ŌĆ£But itŌĆÖs certainly very cool to be able to kind of capture this point in time that is going to disappear and be able to maintain it forever in the digital space.ŌĆØ

The possible success of iRacingŌĆÖs North Wilkesboro venture could lead to the addition and preservation of other abandoned racetracks. While Nazareth Speedway and Texas World Speedway have been too damaged to be scanned, tracks like Nashville Superspeedway could one day be preserved digitally for iRacers.

Every player or ŌĆśiRacer,ŌĆÖ begins at the Rookie level, much like the real world. Clean races will advance the player to ŌĆśClass DŌĆÖ Overtime, iRacers eventually reach ŌĆśClass A.ŌĆÖ┬Ā

iRacers with high skill ratings, also known as ŌĆśiRating,ŌĆÖ can move from Class A to Pro and eventually the eNASCAR iRacing World Championship Series. Only 40 iRacers get to battle for the eNASCAR championship each season.

While iRacing aims to provide an outlet for eSports and be a tool for those looking to perfect their craft, the company has also sponsored drivers in their time of need or for the good of the sport. Their colors have adorned the cars of Marcos Ambrose, Todd Bodine, Ty Majeski, Brett Moffitt, Travis Pastrana, and Josh Wise.

As Myers explained, it can be difficult to get new members simply by sponsoring a race vehicle:

ŌĆ£I wonŌĆÖt sit here and say that we as a company are actively looking to sponsor racecars. I think for us itŌĆÖs not the best use of marketing dollars to just from the way that our product works and kind of how the barriers of entry. ItŌĆÖs difficult to get somebody to see a logo on the side of a race vehicle and then come to our website and sign up, be a member. So, all those relationships typically come upon by either itŌĆÖs being an iRacer thatŌĆÖs just needs some help to try to make it to the next level.ŌĆØ

In the case of Moffitt, his Hattori Racing Enterprises No. 16 Toyota Tundra was sponsor-less heading to Eldora Speedway. Without a sponsor, the teamŌĆÖs championship run would have ended. Myers and iRacing stepped in, and ultimately played a role in MoffittŌĆÖs 2018 NASCAR Gander RV & Outdoors Truck Series Championship.

For Majeski, the late model racer is the highest rated driver on iRacing. At one time, his iRating was well over 9,000. To help him climb up the racing ladder, iRacing has sponsored his late model program.

In the dirt racing world, iRacing partnered with Clint Bowyer as a way of promoting what they do. That expansion has opened the sim racing platform to more members.

ŌĆ£WhatŌĆÖs crazy is that as of this morning (Monday), we have already passed the 110,000,ŌĆØ Myers ecstatically stated. ŌĆ£Not only did we accelerate passed 100,000 at the end of last year, but now we just blown right past it. ItŌĆÖs been a really awesome year the last year and just the way that the service grew.┬Ā

ŌĆ£A lot of it I feel is not only just because our product got better, but I think the relationship with NASCAR and the exposure that our eNASCAR series got in the adding of teams and kind of how that has really helped blow out those numbers. I think itŌĆÖs just it increased so dramatically that I think it caught by surprise.ŌĆØ

The membership on iRacing has not only included drivers that the service has sponsored but others. Current Hendrick Motorsports driver, William ByronŌĆÖs story has famously been told many times. Richard Childress RacingŌĆÖs Anthony Alfredo and NASCAR Drive for DiversityŌĆÖs Rajah Caruth are also regular iRacers.

While iRacing includes much of the NASCAR world, it does not include the NASCAR PintyŌĆÖs Series, NASCAR Peak Mexico Series, or the NASCAR Whelen Euro Series among other racing series around the world. ThatŌĆÖs not to say that they wonŌĆÖt one day be on the service.

In MyersŌĆÖ eyes, it would be much more cost effective to scan several PintyŌĆÖs Series or NASCAR Euro cars and tracks at the same time. Scanning and releasing a group together brings an inherit community willing to buy everything all at once.

Currently, iRacingŌĆÖs focus is on updating several tracks already on the service. Texas Motor Speedway and Kentucky Speedway were last scanned several years before their reconfiguration. Phoenix Raceway is being updated to the most recent reconfiguration.┬Ā

When the eNASCAR iRacing World Championship Series season begins with the virtual Daytona 500, iRacingŌĆÖs partnership with NASCAR will enter itŌĆÖs 11th┬Āconsecutive season with a flourishing relationship still in the very beginning. 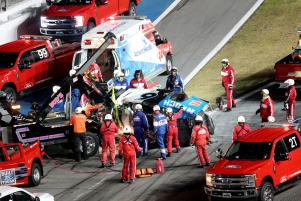 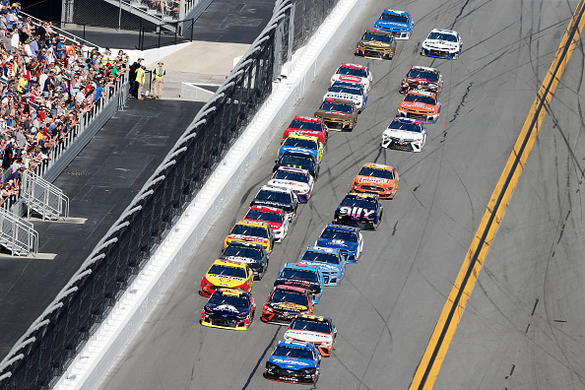