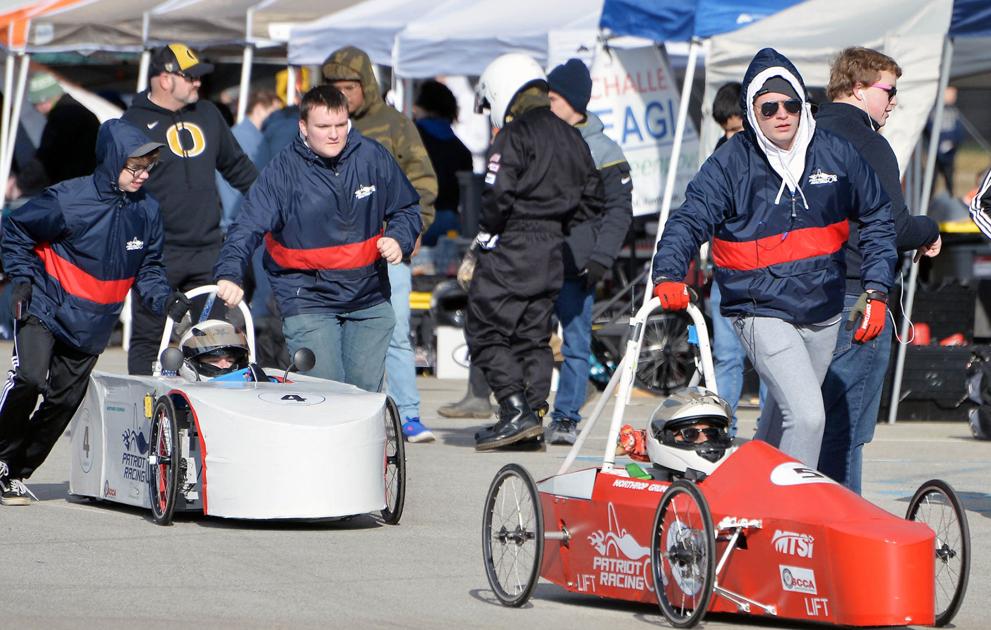 ‚ÄúThe tire just popped. I was driving the car and trying to follow along with the 777 car and get some speed off of them and it just popped, I must have hit a bump or something,‚ÄĚ said Paulson.

Paulson‚Äôs black car, No. 888, limped back to pit row where the Oxford High pit crew feverishly fixed the flat and she was back out on the one-mile course which snaked around baseball fields to compete with the other schools.

The electric cars, competing in the two-day event, are a modern and updated version of traditional soap-box derby cars, according to Drew Sparks, president of Greenpower USA.¬†

Greenpower USA not only sells the cars and accessories but it is also the sanctioning body for races, according to Sparks.

‚ÄúWe‚Äôve got 33 teams from across the Southeast competing in the Greenpower USA electric car competition. Today the teams are trying to see who can go the farthest distance in 90 minutes,‚ÄĚ said Sparks.¬†¬†¬†

The whir of the electric motors and the sound of the rubber tires rumbling on the pavement were the only sounds the cars made as they whizzed by spectators with a top speed of 25 mph.¬†

‚ÄúAll of these cars are run off two 12-volt lead acid batteries so everybody is on the same power source, everybody has the same motor,‚ÄĚ said Sparks.¬†

Sparks said that teams can change tire composition, tire pressure, gear ratios and add electrical components to make the car more efficient as long as they stay within the rules for that category.

‚ÄúThis is the modern day soapbox derby, we added a little more ‚Äėumph‚Äô to it with battery power but it‚Äôs very similar to those events,‚ÄĚ Sparks said. ‚ÄúI think that‚Äôs one thing that gets a lot of the kids interested because they‚Äôve heard all the stories from their parents about the soapbox days and now this their version of that.‚ÄĚ¬†¬†

During the 90-minute race each team must have three different drivers.

‚ÄúIt‚Äôs almost like a true pit change like you see in NASCAR minus changing all the wheels and tires,‚ÄĚ said Sparks.

Another similarity to NASCAR is the points system for each category which are stock, modified and custom.

‚ÄúYou get bragging rights for being at the top. and Oxford High School is at the top of their category,‚ÄĚ Sparks said.¬†

Sparks said there are 400 teams across 20 states and the participation is growing. Last year there were 14 events and this year 21 events are scheduled according to Sparks.¬†

‚ÄúThe program is growing, it‚Äôs really exciting to see what the kids are doing,‚ÄĚ said Sparks.

Drivers, pit crews and supportive parents were all bundled up to stay warm Saturday morning as temperatures were in the 30s and 40s.¬†

When the cars take off from the pit row members of the pit crew have to ‚Äúpush‚ÄĚ the car off to help it get going.

Joseph Lane, 16, from Harlem High School in Georgia, pushed his team‚Äôs car during a pit change.

Angie Rowe, from Oxford, was there to watch her son during Saturday‚Äôs action.

‚ÄúI think that it is absolutely amazing to watch these kids. They‚Äôre given a kit and they‚Äôre given dimensions and a list of things they can and can‚Äôt do…I think it‚Äôs phenomenal,‚ÄĚ said Rowe.