The 10 best NASCAR drivers of the decade – The Comeback 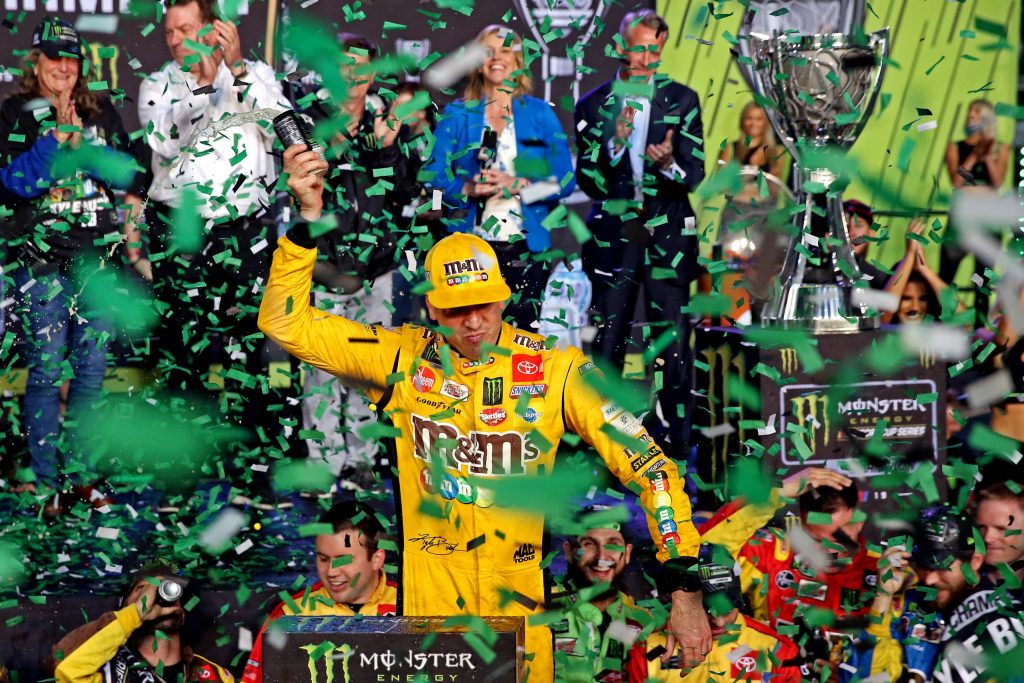 The last decade has proven to be a very interesting time in the NASCAR world. Legends have retired, the formerly young have become the veterans, and the young drivers (some from legendary families) have entered the sport looking to forge their own path.

It was also a decade of change for NASCAR. In terms of title sponsors, NASCAR went from Sprint to Monster Energy to an entirely different sponsorship structure altogether. The cars have changed. NASCAR went from the Car of Tomorrow to the Gen 6 car, and various downforce packages have taken place in between.

With so much change, from the cars to the various playoff structures to the increased competition, this may be the most challenging time to find success in NASCAR. That being said, it‚Äôs not impossible and drivers have been able to find success in the 2010s. Some legendary drivers like Dale Earnhardt Jr., Jeff Gordon, and Tony Stewart fell just short of making the top 10, but these 10 drivers are some of the most successful drivers in NASCAR history. We take a look at their success throughout the 2010s‚Ä¶

Kurt Busch is the only driver in the top 10 who wasn‚Äôt a serious title contender throughout the 2010s, but Busch had consistency throughout the decade. After his tenure at Team Penske, Busch raced for some teams who weren‚Äôt at the top of the series.

In 2012, Busch raced for James Finch and then moved over to Furniture Row Racing before the season ended. Don‚Äôt get it mixed up; this wasn‚Äôt the powerhouse team that won the championship with Martin Truex Jr. Busch put in a respectable performance in the 78, but the team was still a year or two away from consistently winning. And by that point, Busch went to Stewart-Haas Racing.

From there, Busch got back on the winning track and won the Daytona 500 in 2017. With that, plus a series of top 10 finishes that rank him near some of the top drivers of the decade, you could make the argument that Busch got the most out of the equipment he‚Äôs given, and he‚Äôs doing that as he drives for Chip Ganassi.

Carl Edwards‚Äô sudden retirement in the prime of his career surprised us all. To this day, we still don‚Äôt fully understand why Edwards retired (and it‚Äôs up to him whether or not he wants to tell us). All we can do is support that decision and respect that someone was able to dictate their career on their own terms.

Things could‚Äôve been very different for Edwards in 2011. Before NASCAR changed to a guaranteed ‚Äúwinner-take-all‚ÄĚ four-way battle in the final race, Edwards was locked in a battle with Tony Stewart where the points battle was so tight, Stewart and Edwards tied for the title after Stewart won and Edwards finished second at Homestead. It was Stewart‚Äôs five wins to Edwards‚Äô one that got Tony the edge for the title and left Edwards on the outside.

Despite racing in little over half the decade, Edwards put up the stats that likely would‚Äôve been one of the top drivers of the decade if he‚Äôd kept racing. Picturing what Carl Edwards‚Äô racing future might have been is an interesting ‚Äúwhat if‚ÄĚ for fans to debate, but it seems like Edwards has no regrets walking away.

Matt Kenseth‚Äôs 2010s were like his entire career. Kenseth wasn‚Äôt really dominant, so you never think he was really that impressive, but when you see his body of work you think to yourself, ‚ÄúHoly crap, this guy was great.‚ÄĚ

A career that seemed to be rejuvenated at the turn of the decade, Kenseth finished no lower than seventh in seven of eight full time seasons. And the time he failed to finish that high was when he intentionally wrecked Joey Logano and got suspended two races.

Kenseth‚Äôs run from 2012-2013 would probably go down as his best non-championship years. Going from Roush/Fenway Racing to Joe Gibbs Racing, Kenseth won the Daytona 500 in 2012 and had a career-high seven wins in 2013, including a win in the Southern 500. Matt Kenseth‚Äôs decade may have been unassuming, but there was no doubt he tore up the track every time he got in a race car.

The ‚Äúlate bloomer‚ÄĚ of the top 10, Martin Truex Jr. only had two wins in the first half of the decade. At that point, not too many people would predict what would happen next, but Truex went out and completely dominated. First focusing on intermediate tracks, Truex and Furniture Row Racing collected a total of 16 wins in just three seasons, including a championship and a runner-up points finish the next year.

Now with Joe Gibbs Racing, Truex hasn‚Äôt skipped a beat as he added seven wins in 2019. Obtaining 23 of 25 wins in just the last four years is remarkable and is a great setup for the next decade. Truex might be turning 40 next year, but he‚Äôll have no plans to slow down.

Denny Hamlin might already be the best driver not to win a Cup championship but what separates him from legends who haven‚Äôt won like Mark Martin and Junior Johnson, Hamlin can still win a title before his career is over.

Despite that empty spot in the trophy case, Hamlin won pretty much everything else. The only person to win multiple Daytona 500‚Äôs in the 2010s, Hamlin also won multiple Southern 500‚Äôs and multiple Bristol night races.

As he comes off his most successful season, Hamlin is in the prime of his career and isn‚Äôt stopping anytime soon. He might not have won a championship in this decade but don‚Äôt be surprised if Hamlin wins one early in the next decade.

Joey Logano was almost a cautionary tale in moving up a driver too quickly. At 19, Logano began his first full Cup season, and even got a win in a rain-shortened race, but results were few and far between. It wasn‚Äôt until he arrived at Team Penske where Logano shined and really set himself apart as one of the top drivers of the decade.

In a short period of time, Logano was clicking off wins and top finishes. He was becoming a force in the NASCAR Cup Series. In 2014 and 2015, Logano got half his wins in the decade, which included a win at the Daytona 500. After an uncharacteristically rough 2017 season where he missed the playoffs, Logano showed the same kind of resiliency he had at the beginning of his career. Logano scored three wins the next year, and while some were critical of his aggressive style at Martinsville, it proved to be successful and Logano won the championship at the end of the season.

It‚Äôs strange to think Joey Logano isn‚Äôt even 30 and has already raced a full decade in the NASCAR Cup Series. Unlike most people in the top 10, Logano has a possibility to not only make an impact in the 2020s, but maybe even the 2030s if he still wants to race that long.

After a transitional 2010 that saw him go from James Finch to Roger Penske, Brad Keselowski began his full-time Cup career under some difficult circumstances. But after he had his first full season at Team Penske, Keselowski hit the ground running, getting win after win. From 2011 to 2019, Keselowski had seven multi-win seasons, including a career-high six wins in 2014.

In just his third season with Team Penske, Keselowski won the 2012 NASCAR Cup Series championship. This meteoric rise from the racer continues to this day. Winning crown jewel races in back-to-back weeks in 2018 at Darlington and Indianapolis catapulted Keselowski into another level. If he can keep up this winning run and reach the Championship Four more often in the upcoming decade, it may be a dream time for Brad Keselowski.

While his best years were back in the previous decade, Jimmie Johnson still outperformed just about everybody in the 2010s. Up until a couple years ago (like his Hendrick predecessor Jeff Gordon), a season where Jimmie Johnson experienced a slump would be a dream season for most drivers.

Johnson won his last three Cup championships in the 2010s, including completing an unprecedented five-peat in 2010. He won one of every crown jewel race (depending if you count the Bristol night race), and while he‚Äôs currently on a winless streak going back to June 2017, Johnson was only four wins shy of having the most wins in the decade. Johnson‚Äôs final full season is next year, and it will be his last chance to win his eighth championship. If he wins the 2020 Cup championship, not only will Johnson have the most, but he will be the only driver to win a championship in three consecutive decades. That would be a magical way to cap off a career.

Kevin Harvick enjoyed a renaissance in his NASCAR career this decade, and has ridden that wave to this day. After suffering two winless seasons, Harvick started winning again in 2010 and never looked back. Harvick has rarely missed a step and has done things that no one else has done, not even from the top-ranked driver. Harvick has the most top fives and top tens of this decade, and has finished third or better in points in all but two years where he finished eighth.

The accolades for Harvick in this decade are numerous. In 2018, Harvick won eight races and had 29 top tens. He was near perfection, but finished third in the championship. Really, the only reason Harvick isn‚Äôt sitting at the top of this list is because he didn‚Äôt win multiple championships this decade. It might not be fair to do that since the championship is now decided on a single race and Harvick has taken part in every championship race in this current playoff format, but there‚Äôs something about needing to close the deal that needs to be considered. Even if that‚Äôs the case, Kevin Harvick has had the kind of decade everyone would love to have.

Kyle Busch isn‚Äôt only the NASCAR driver of the decade- he‚Äôs on his way to being one of the best ever. He‚Äôs definitely polarizing and he has as many haters as fans, but there‚Äôs no discounting what he can do on the track.

Averaging four wins a year in these last 10 years, Busch exceeded that average in a year where he missed nearly a third of the races. In 2015, Busch suffered broken bones in both legs in an accident at Daytona, which caused him to miss the first 11 races. Thanks to a medical waiver, Busch was able to get into the Playoffs and win his first championship. Given the circumstances, you may say that this was Kyle Busch‚Äôs finest season in an amazing decade.