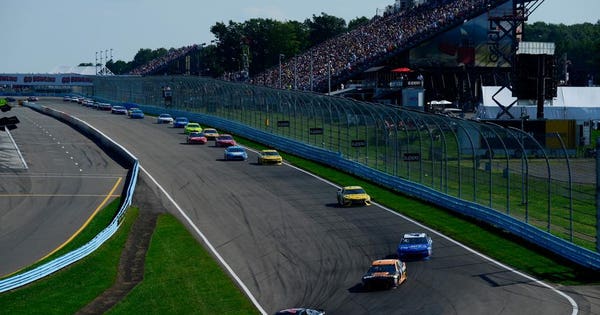 Martin Truex Jr. leads a pack of cars during the Monster Energy NASCAR Cup Series GoBowling at The Glen at Watkins Glen International on August 5, 2018. (Photo by Robert Laberge/Getty Images)

So how many times have you read or heard this from the NASCAR haters: NASCAR is really boring because all they do is turn left and drive around in circles for three hours.¬†(NASCAR haters¬†are kind of boring themselves.)

The haters probably don‚Äôt know much, if anything, about the famous race track at Watkins Glen, N.Y., which plays host to its annual NASCAR Cup race this weekend. This could be the NASCAR race for anti-NASCAR people.

Watkins Glen International, or ‚ÄúThe Glen,‚ÄĚ is a road course atop a hill a few miles south of town, which is next to gorgeous Seneca Lake, one of upstate New York‚Äôs Finger Lakes. There are right-hand turns on the track, and no turn is the same — two big departures from the norm for stock cars.

Unlike an oval track on a flat surface, there are also rises and dips in elevation on the track at Watkins Glen, which makes for a challenging race that happens to look very good on television. Drivers dive-bomb from a long front stretch down into a very tight right at Turn 1.

There is also a long back stretch at The Glen, but it ends at what is called a ‚Äúbus stop,‚ÄĚ where the cars slow down dramatically to negotiate a tight inner loop before heading into a more sweeping turn. There are eight turns in all on the 2.45-mile track, which is framed by sky-blue guardrails.

So The Glen, one of three road courses now on the Cup schedule (Sonoma and the ‚Äúroval‚ÄĚ at Charlotte are the others), does not look like any other race track. There are grandstands at The Glen, but they are sprinkled around the track. Campers love it there.

The Glen, which played host to the U.S. Grand Prix for Formula 1 cars from 1961 to 1980, has very much of a laid-back vibe, and the weather is usually pleasant in the Finger Lakes in early August. There are plenty of other things to see and do in the region — there are dozens of wineries around the lakes, for example — and can be a starting point for a wider vacation.

But here is the one essential aspect to the race that might actually appeal to people who think NASCAR is boring: The race is only 90 laps, or 220.5 miles. Chase Elliott won last year‚Äôs race at The Glen in two hours, 13 minutes. Martin Truex Jr. won in 2017 in a record 2:07.

It would be ideal if every Cup race — or maybe every race except the Daytona 500, Coca-Cola 600, one race at Talladega and the Southern 500 — would take less than 2¬Ĺ hours. Even races on the road course at Sonoma go typically go past the 2¬Ĺ-hour mark.

As a potential bonus, stock cars can run in the rain on road courses with rain tires and windshield wipers, because the cars travel substantially slower on road courses and are much less likely to spin out. (The forecast is good, so a rain race is not likely this year, alas.)¬†

NASCAR‚Äôs regular drivers are more comfortable, ergo better, at road courses than they were in the old days, so the race at The Glen does not draw as many of the ‚Äúroad-course ringers,‚ÄĚ or specialists who drop into the Cup series to drive the non-ovals.

The most famous road-course ringer of them all, the prodigiously curly-haired Californian Boris Said, drove in his 17th and final race at The Glen in 2017. Said finished third in the Cup race there in 2005, but had been unable to land fast rides and wanted to focus on fatherhood.

The Glen was one of the only NASCAR tracks where a group of guys, all wearing curly-haired wigs and nicknamed ‚ÄúSaid Heads,‚ÄĚ roamed the infield, chanting, ‚ÄúWho said? Boris Said!‚ÄĚ Boris Said, an accomplished sports-car driver, loved the Said Heads.

Elliott outdueled Truex over the final exciting laps in 2018 at The Glen for his first victory in his Cup career — an overwhelming artistic success that was overshadowed just hours later when NASCAR CEO and chairman Brian France was arrested in Long Island on charges of aggravated driving while intoxicated and criminal possession of a controlled substance.

France has disappeared, thankfully, but Elliott has won three more races since then, and The Glen would seem to be locked into the Cup schedule, as it has every year since 1986, when the late Tim Richmond won. (Buck Baker won a NASCAR race there in 1957.)

Turn it on and give it a try, NASCAR haters: NBC Sports Network, anticipated green flag at 3:18 p.m. ET Sunday. You might actually, gulp, enjoy what you see.