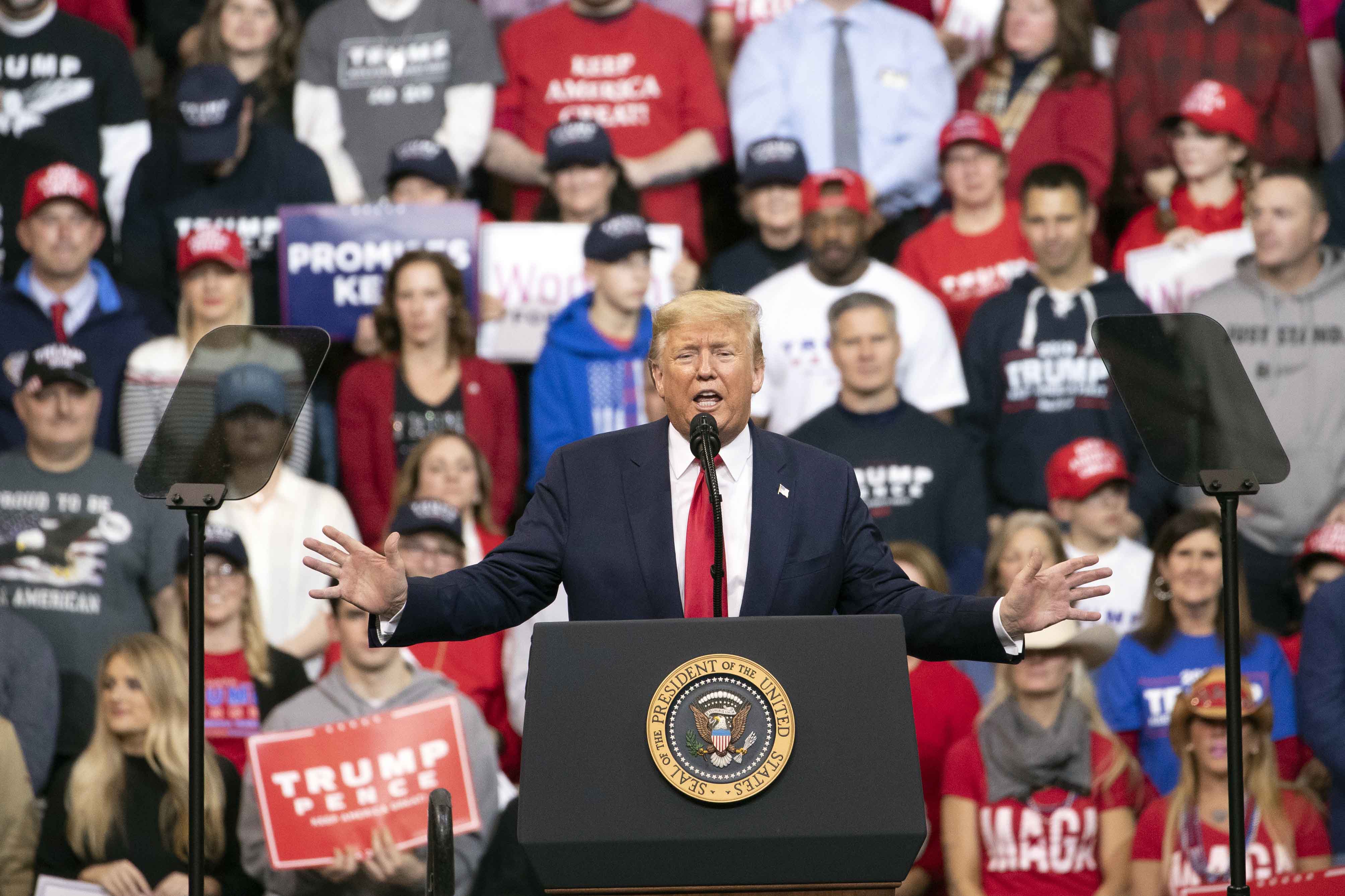 Trump, who plans to spend this weekend at his Mar-a-Lago resort in south Florida, will fly to the season-opening NASCAR race on his way back to Washington, according to two people familiar with the situation, including a Capitol Hill Republican aide.

Trump has shown an affinity for NASCAR in recent years after former CEO Brian France, Hall of Famer Bill Elliott and drivers Chase Elliott, Ryan Newman and David Ragan endorsed him when he was running for president in 2016. He later said multiple times that he had been endorsed by NASCAR.

Air traffic controllers at Daytona Beach International Airport said this week that Trump might be flying in to the Daytona 500. The FAA also posted a notice on its website alerting pilots to expect VIP movement ‚ÄĒ often a sign of the president‚Äôs travel ‚ÄĒ on Sunday in the vicinity of Daytona Beach.

The White House, the Trump campaign, NASCAR and the Daytona Speedway didn‚Äôt respond to requests for comment.

Trump has received a mixed reaction at recent sporting events. He was cheered by college football fans amid impeachment in January during the national championship game in New Orleans. But he was booed at Game 5 of the World Series game in Washington, D.C., when his image was beamed onto the big screen.

Two weeks ago, Trump eschewed a potential appearance at Super Bowl LIV ‚ÄĒ an event that could have been fraught with controversy and bad optics, given his controversial statements about NFL players and ongoing Senate impeachment trial.

Though Trump is close with several NFL owners, many of whom donated to his 2016 campaign, Trump viciously attacked NFL players who were kneeling in protest during the national anthem. At one point, Trump proposed that kneeling players be ejected from the game on their first infraction, then suspended for the season for a second occurrence.

The acrimony between Trump and some NFL players reached its peak after the 2018 Super Bowl, when the president at the last minute canceled the traditional White House visit for the Philadelphia Eagles due in part to the low number of players who were willing to attend.

‚ÄúThey disagree with their president because he insists that they proudly stand for the National Anthem, hand on heart, in honor of the great men and women of our military and the people of our country,‚ÄĚ Trump said at the time.

Several members of the team pushed back against Trump’s narrative.

“Here are some facts,” tweeted Torrey Smith, a wide receiver on the team. “1. Not many people were going to go 2. No one refused to go simply because Trump ‘insists’ folks stand for the anthem 3. The President continues to spread the false narrative that players are anti military.”

The NFL fanbase itself is demographically and geographically divided, and on average, according to FiveThirtyEight, leans slightly more Democrat. A 2018 Morning Consult poll found that Trump faces worse relations with the NBA fanbase, which is more Democrat, ethnically diverse, and counts a number of Trump critics among its superstars. Perhaps reflecting that, the Golden State Warriors declined an offer to visit the White House after winning the 2017 NBA championship.

Conversely, NASCAR fans are generally pro-Trump. A 2019 Zogby poll found that at least 67 percent of NASCAR fans approve or somewhat approve of Trump.

Numerous NASCAR figureheads also stood by Trump during the National Anthem kneeling controversy. In 2017, several team owners and Hall of Fame drivers told ESPN that they would not want their drivers or team members to kneel for the anthem, with a few stating that they would fire anyone who did so.

‚ÄúGet you a ride on a Greyhound bus when the national anthem is over,‚Äô‚Äô Richard Childress told his team that year. ‚ÄúAnybody that works for me should respect the country we live in. So many people gave their lives for it. This is America.‚ÄĚ

Trump singled out this commitment about the national anthem when he honored 2017 NASCAR Cup Series champion Max Truex Jr. at the White House. ‚ÄúAt every NASCAR race, you will see thousands of patriotic Americans, from the grandstands to the pit stalls, proudly waving our flag and roaring with joy at the words, ‚ÄėStart your engines,‚Äô‚ÄĚ he said.

“And I will tell you ‚ÄĒ one thing I know about NASCAR, they do indeed, Brian, stand for the playing of the national anthem, right,” Trump added. “They do indeed. Somebody said maybe you shouldn’t say that, that’ll be controversial. I said, ‘That’s OK, NASCAR’s not going to mind it at all.’ Right fellas? They don’t mind it at all.”

Trump also maintains other ties to the sporting world, including with Dana White, the president of UFC, and the McMahon family, which owns World Wrestling Entertainment, having hosted UFC and WWE events at his casinos when both leagues were in their early days. Trump recently attended the UFC 244 fight last November, where he was greeted with a mixed reaction from the crowd at Madison Square Garden.

White, who had personally invited Trump to the fight night, later told reporters that he didn‚Äôt mind. ‚ÄúI just felt like tonight we were going to walk in and whatever happened, happened. The guy told me as a friend he was coming to see the fights, and he did tonight, and I appreciate him, and it was a big night for the sport.‚ÄĚ

Gary Fineout and Meridith McGraw contributed to this report.