New Hampshire Motor Speedway has proven to be anything but fun for Alex Bowman this weekend.

The one-mile track, which hosts the 20th race in the Monster Energy NASCAR Cup Series ‚ÄĒ the Foxwood Casino & Resort 301 on Sunday ‚ÄĒ has caused fits for the Hendrick Motorsports driver during qualifying and practice. Now, he’ll be¬†forced¬†to drive someone else’s car.

During Friday’s qualifying,¬†Bowman was coming down the frontstretch during his time trial run when the¬†driveshaft in his No. 88 Chevrolet broke. Unable to complete his qualifying run and laying oil all over the track, Bowman brought his car to a stop on the apron of Turn 1. 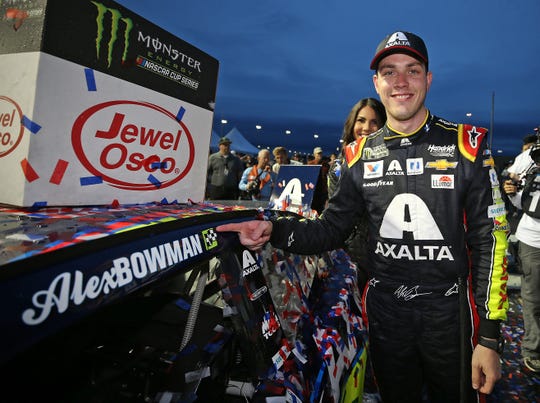 Alex Bowman had trouble with his No. 88 Chevrolet in both qualifying and practice at New Hampshire Motor Speedway.¬†(Photo: Matt Sullivan, Getty Images)

It was “just a big boom going down the front straightaway and then smoke and oil everywhere and just trying to get it off the racetrack,‚ÄĚ Bowman said during an NBCSN interview.

That incident forced Bowman, who scored his first NASCAR Cup victory three weeks ago at Chicagoland Speedway,¬†to a backup car on Saturday for two practice sessions, but once again “The Magic Mile” got the better of him. Bowman wrecked his backup car with just under 28 minutes to go in final practice after getting sideways going into Turn 1 and slamming the right rear of his car into the wall.

Take a look at the replay which shows what happened to @AlexBowman88 and his backup car at @NHMS. pic.twitter.com/Y52tFxN0wY

With both the primary and backup cars now unsuitable for the race, Hendrick Motorsports and Chevrolet went to a rarely used Plan B¬†‚ÄĒ Bowman will race teammate Jimmie Johnson’s backup car Sunday.

“The plan for the 88 is to get the 48 (Johnson’s) car,” Jeff Andrews, Hendrick Motorsports’ Vice President of Competition, said. “We chose that because it’s a painted car and not a wrapped car, versus the 9 (of Chase Elliott). To re-wrap the 48 is a better option as far as body tolerances and things like that.‚ÄĚ 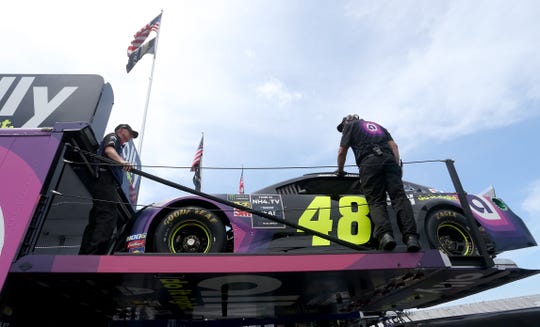 Painting and¬†wrapping a car is normally done at a team’s headquarters, but the Hendrick crew had no choice but to scramble to make the transition at the track.

“It’s more difficult obviously, but we have a great group of guys,” Andrews said.¬†“Unfortunately we have been putting them through a lot the last couple of days in this heat. But we will get through it and line up and go racing tomorrow.”

There are no more practice sessions on the docket before the race, scheduled for 3 p.m. ET, so Johnson will not have to worry about needing a backup car. Should his Chevrolet encounter issues Sunday, the No. 48 crew will either need to make repairs or his day will be over. Drivers are not allowed to switch to a backup car during a race, per NASCAR rules.

Hendrick driver William Byron will also race in a backup car¬†‚ÄĒ his own¬†‚ÄĒ on Sunday after his No. 24 Chevrolet hit the wall during practice.¬†Three other drivers will be in backups Sunday. Denny Hamlin and Ryan Newman wrecked in Friday’s practice, while Kyle Larson hit the wall on Saturday.